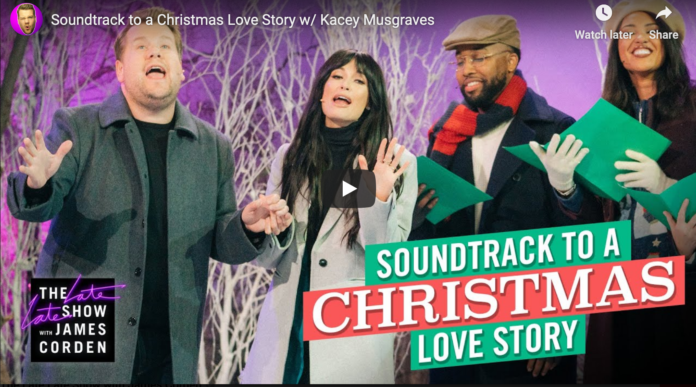 James Corden is up to his musical ways again! This time he’s brought in his friend and country music superstar, Kacey Musgraves.  James Corden and Kacey Musgraves tell the tale of a Christmas love story across nine different sets, singing fourteen holiday classics, all in one take.

Musgraves was on the show to promote The Kacey Musgraves Christmas Show, which is available now on Amazon Prime Video.

Musgraves opened with Jingle Bell Rock.  The two then meet on the street “I don’t wanna miss out on a holiday/ But I can’t stop staring at your face,” Corden sang Justin Bieber’s “Under the Mistletoe” to Musgraves. She responded, “I should be playing in the winter snow/ But I’ma be under the mistletoe.”

The two sang duets on many songs and even paid homage to Love Actually, with Corden holding up the cards sending a message to Musgraves.

The songs represented all the phases of their relationship, from meeting, to cheating, to reconnecting over Christmastime. Ultimately the two come back together and its quite beautiful.

Each week night, THE LATE LATE SHOW with JAMES CORDEN throws the ultimate late night after party with a mix of celebrity guests, edgy musical acts, games and sketches. Corden differentiates his show by offering viewers a peek behind-the-scenes into the green room, bringing all of his guests out at once and lending his musical and acting talents to various sketches.

Additionally, bandleader Reggie Watts and the house band provide original, improvised music throughout the show. Since Corden took the reigns as host in March 2015, he has quickly become known for generating buzzworthy viral videos, such as Carpool Karaoke.