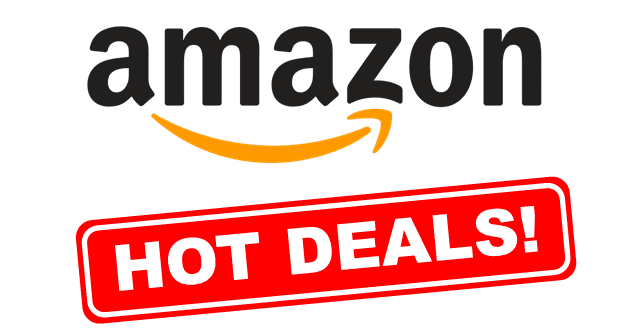 These deals are always subject to change and prices shift on Amazon ALL THE TIME so hurry!  Or keep checking back!

These are the BEST deals on Amazon.com for the Deals Week! We’ve broken them down into categories, including hardware, electronics, televisions, cameras and more! Check them out! Just click on any image or link to learn more!

The Fire TV Stick is a streaming gadget that lets you watch Netflix, Hulu, Amazon Video (of course) and just about any other service you can think of in full 1080p. It includes an Alexa remote, so you can find things to watch and interact with Amazon’s assistant using your voice.

Amazon Fire 7 Tablet: was $49 now just $29 at Amazon
The Fire 7 tablet is the best affordable tablet around. It lets you access your favorite entertainment apps and call on Alexa for hands-free functionality. It’s now at its cheapest price ever.

Fire HD 8 Kids Tablet: was $129 now $79 at Amazon
Want a bigger screen for your child? The Fire HD 8 Kids Tablet packs an 8-inch HD display, 1.3 GHz quad-core CPU, 1.5GB of RAM, and 32GB of storage. This deal takes $50 off its regular price. It also includes a 2-year warranty and protective case.

Kindle Paperwhite: was $129 now $84 at Amazon
The water-resistant Kindle Paperwhite features a flush-to-screen display, which makes it one of the most impressive e-readers around. We found it easy-to-use and able to keep up with the biggest bookworms.

Amazon Echo Show 8: was $129 now $99 at Amazon
The Echo Show 8 makes its debut on Nov. 21, however, you can pre-order it now and save $30 in the process. It features an 8-inch display and a camera shutter that block its lens when it’s not in use.

Amazon Echo Sub: was $129 now $109 at Amazon
The Echo Sub pairs wirelessly with your Echo or Echo Plus to deliver down-firing, 100W deep bass via its 6-inch woofer. It’s on sale for the first time.

Amazon Echo Show 8: was $129 now $99 at Amazon
The Echo Show 8 makes its debut on Nov. 21, however, you can pre-order it now and save $30 in the process. It features an 8-inch display and a camera shutter that block its lens when it’s not in use.

Shark IQ R101 Robot Vacuum: was $449 now $379.99 at Amazon
The Alexa-compatible Shark IQ is programmable, effective, and self-cleaning. Its powerful suction removes debris and pet hair from carpets and hard floors. Get it now for $70 off its regular price.

Bose Home Speaker 500: was $399 now $299 at Amazon
The Bose Home Speaker 500 boasts the widest sound of any smart speaker, a built-in color display, and eight noise cancelling mics to hear you from across the room. It supports both Alexa and Google Assistant.

Bose Home Speaker 300: was $259 now $199 at Amazon
The Bluetooth-based Bose Home Speaker 300 has Amazon’s and Google’s digital assistants built right in. It offers 360-degree sound and is also AirPlay 2 compatible. At $60 off, it’s now at its lowest price ever.

Fitbit Versa 2: was $199.95, now $148.99 at Amazon
Fitbit’s newest Versa 2 smartwatch has a beautiful always-on OLED display — a first for Fitbit — and Alexa built in, which makes it a more useful smartwatch. Fitbit also offers Spotify support on the Versa 2. Snag yourself one now for $50 off.

23andMe DNA Test: was $199 now $99 at Amazon
The 23andMe DNA Test includes over 125 reports on your health, wellness, and ancestry. Reports include info on inherited health conditions to a family tree history. Normally priced at $199, Amazon has it on sale for just $99.

Apple Watch S5 (GPS/40mm): was $399 now $384 at Amazon
The new Apple Watch features an always-on display that dims itself when not in direct view. It also has a built-in compass and faster S5 processor. It’s only $15 off, but it’s one of the best deals we’ve seen so far for Apple’s new flagship watch. The GPS/LTE model is $50 off.

Apple Watch S3 (GPS/38mm): was $199 now $169.99 at Amazon
The Apple Watch 3 is an excellent smartwatch for users who don’t want to invest too much in a smartwatch. It tracks all of your activities/workouts and it’s also waterproof so you can use it in the pool. Get it now for $30 off.

Beats Solo3 Wireless Headphones: was $300 now $179 at Amazon
These wireless headphones give you booming sound and a long-battery 40-hour battery life. Now half price at Amazon, it’s a steal!

Beats urBeats3 Wired Earphones: was $59.95 now $49.99 at Amazon
The urBeats3 are wired earbuds that offer tight, deep bass. You can get them with a 3.5mm cable for $49. Alternatively, iPhone/iPad owners can get them with a Lightning connector for a few bucks less at $42.

AirPods with Charging Case: was $159 now $139 at Amazon
For a limited time, you can get the latest model AirPods with standard charging case for $20 off. It features Apple’s latest H1 chip for faster wireless connectivity with Apple devices.

AirPods w/ Wireless Case: was $199 now $164.99 at Amazon
One of the 2019 AirPods’ new features is that they can be charged wirelessly via Apple’s new wireless AirPods charger. Amazon has the AirPods w/ the wireless charger on sale for $164.99, which is this bundle’s second-lowest price ever.View Deal

Nikon Sale: Up to 60% off Nikon cameras/lenses at Amazon
It’s not often we get to see big sales on Nikon hardware. However, Amazon is taking up to 40% off Nikon DSLR cameras, lenses, and camera bundles. Right now, you can get a Nikon D3500 w/ 2 lenses for $446.95, which is the lowest price ever for this excellent DSLR camera for beginners.