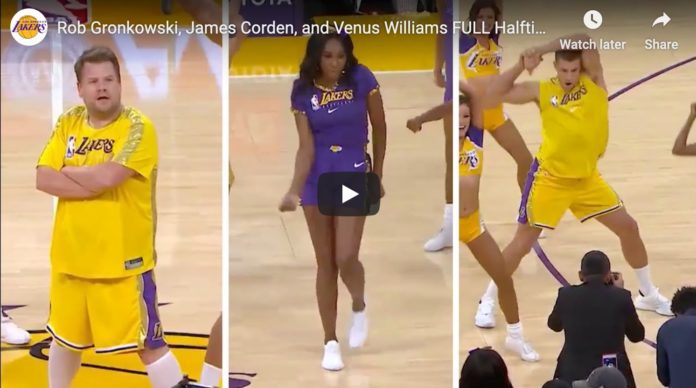 Host, James Corden, and NFL star, Rob Gronkowski, danced with the Lake Girls.  The two are seen, along with tennis star, Venus Williams, showing off their best dance moves.  Now we know why Gronkowski has been hesitant to return to the Patriots this season, as he’s got a new career in performing with the legendary Lakers dance squad.

The trio joined the cheerleading squad for a halftime dance routine during the Lakers’ 112-107 win over the Oklahoma City Thunder at Staples Center on Tuesday night.

It was later revealed on Twitter that the dance sequences were being filmed for the upcoming CBS show “Game On,” a remake of the Corden-hosted British game show “A League of Their Own.” On the U.S. version, Gronkowski and Williams will lead two teams in various sports-related challenges.

Check out these amazing moves from Gronkowski, Williams and Corden.  Let us know what you think in the comments below!