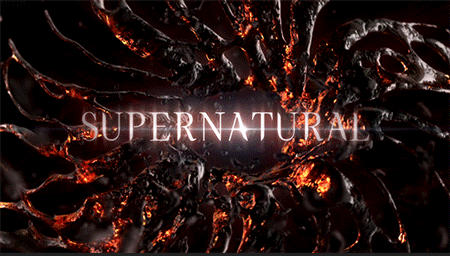 This week’s opening has us revisit a scene from the episode “Back and the Future.” This time instead of a mere glimpse of foreshadowing into the future, “Atomic Monsters” only shows red. Destruction and chaos appear to be the only truth at this time. The glimpses we see this time are of Dean watching Benny die. Many people are aiding in a battle that takes place in the future. A grim future where Sam is running on demon blood. A future where Sam has reigned death down on many people. There is an incident that takes place in Sioux Falls that sounds as if Jodi and Bobby die. And once again we watch Sam kill Dean with one move of his head.

Is this their future? Or is this an alternate Earth? I’m not sure anymore, but regardless I was glad to realize that for now, this is merely a dream. However, between this opener and the ending of “Atomic Monsters” I cannot help but wonder what Supernatural series finale has in store for fans.

Sam makes his way into the kitchen where Dean is having breakfast. One of the funniest conversations I’ve heard in a while between them occurs as Dean tricks Sam into eating real bacon. In Beaverdale, Iowa a local girl’s body, Susie, appears in the woods completely shredded. While the locals seem to think it is a freak animal attack, Dean knows better. He insists that they take the case, but Sam protests. Dean can take this case on himself. Thankfully, Dean talks Sam into coming with him.

As Sam talks to the vice principal, a set of parents arrive at the school. Sam discovers that a lacrosse game is far more important than a prayer vigil for a dead teenage girl. Even though Billy’s parents attempt to change the vice principal’s mind once again, she does not budge. She doesn’t care that scouts from Yale are going to come in. Nor should she in this case. The pray vigil is far more important than the lacrosse game. While Sam has talked to her, Dean went to visit the morgue. They found a vampire fang is found on Susie and there were no defensive wounds either. It is now clear the victim knew her attacker.

There’s no blood at the crime scene. The police have no idea how to begin dealing with what has happened to Susie and Sam has some unresolved resentment about that. The simple things in life are the end of the world for them. Not the actual apocalypse that Sam and Dean just had help stopping. They do not even have time to process this talk and the fact this town was what Sam always wanted. The town represents a part of the same he will never get be able to attain. At least that is how the series has set up the Winchesters’ lives so far.

The big shocker of this episode is that Becky is living in a similar suburban neighborhood with her husband and children. Despite not getting her happily ever after with Sam, she has managed to attain it with someone else. Though he does not call her Becky. Upon him leaving on the fishing trip, Chuck appears out of nowhere and approaches Becky. He just wants to talk. He pleads with her to wait. As soon as he mentions that he has no place to go Becky takes pity on Chuck. While we do not see them go inside the home, we know she does not completely dismiss him as she planned.

Ultimately, we learn that Becky is in a good place. Yes, she still has a Supernatural obsession, but she has found a way to turn a profit. She has a following online for her writing. Becky is finally good so she does not need Chuck throwing a monkey wrench into her world. A world where she finally likes herself. The problem is he plays the pity card like a champ and reveals he wishes he could say the same about himself. He is happy for her but he is at an all-time low. Chuck hates himself and he admits he feels lost because of the falling out with the Winchesters.

Becky convinces Chuck to write again and gives an amazing message overall. If a person is happiest when they are writing then they make time for it. Even if it’s short spurts throughout the day. Writers somehow figure out a way. The writer’s block is somehow conquered, but sometimes to do so we have to sit down and write. However, after Becky’s reaction to the second draft Chuck has written, I’m not sure we need him writing anymore.

Meanwhile, Sam and Dean go back to the high school to get more intel on a girl, Tori, that did not come home after practice. Dean makes an off-colored remark as they piece together that their cheerleader friend. By talking to the teenager inside the mascot uniform, we learn that Victoria was third in line to take over if something happened to both Susie and Tori. We see a moment take place between her and Billy in the gym right before Dean and Sam arrive. However, Billy’s mother makes him leave and Sam realizes she is not a vampire for the mere fact she has braces.

Shortly thereafter we discover that Tori is tied up in Billy’s home. It appears they are draining her of blood. Much like Sam and Dean, I assumed that the father is the vampire. Although the father did kidnap Tori, he is not the vampire. We learn that Billy’s parents were protecting him. He is the one that accidentally killed Susie one night. Hearing her heartbeat was too much for him. The saddest part is the realization Billy has to die. They have to kill him because it is too late to cure him. Billy maps out everything for his parents and accepts his fate.

The episode does not end there though. As we cut back to Chuck and Becky, she is visibly upset. Although it seems that Chuck too the notes she gave him to heart, he has completely ended the story. He does not know how to get there, but he knows where he’s going. She admits that it is dark as he starts talking about the cover of the last book. A cover with a tombstone that merely says, Winchester. Becky explains that it’s awful. It’s hopeless and that he cannot do that to the fans.

Finally, Chuck not only decides he’s going to say but he ends up making Becky and her entire family disappear with just a snap. After all, he’s a writer. He can do anything. In an episode where everyone is attempting to figure out their place, even God, we are left knowing one thing. The job is still a family business more now than ever. All those people are with them and without Chuck, they can finally move on. They are finally free. However, are they free? What is God’s final story? Even now is he still manipulating what we are seeing on screen? Only time will tell.

With Chuck back in the picture, he brings many questions. Will we see Becky and her family again? When will Cas return? Is Sam slowly going to have demon blood fed to him somehow? More importantly, though, is every character we’ve ever loved going to die this season? Tell us your theories of what Chuck is up to below. And let us know your thoughts on Thursday’s episode in the comments below.

And make sure to continue the hunt by watching Supernatural next Thursday at 8 pm EST on The CW Network.