It’s officially happening! After endless speculation and teasing, the first trailer for El Camino: A Breaking Bad Movie has finally dropped! We can hardly contain our excitement!

Check out the awesome teaser for the upcoming Breaking Bad film below:

Where is Jesse Pinkman? pic.twitter.com/bHGB1Ib8cg

The film will air on Netflix starting October 11th of this year and is described as follows:

“The Netflix Television Event EL CAMINO: A BREAKING BAD MOVIE reunites fans with Jesse Pinkman (Emmy-winner Aaron Paul). In the wake of his dramatic escape from captivity, Jesse must come to terms with his past in order to forge some kind of future.”

The series, Breaking Bad, followed Walter White (played by Bryan Cranston), a chemistry teacher who is diagnosed with terminal cancer. In order to pay his medical bills and ensure his family’s finances are secure, he turns to a life of drug-producing and selling with his accomplice, and former student, Jesse Pinkman (Aaron Paul). Honestly, it’s one of the best series to grace television in recent years.

In addition to Cranston and Paul, the series also starred Anna Gunn, Dean Norris, Betsy Brandt, RJ Mitte, Jonathan Banks, Giancarlo Esposito, and Bob Odenkirk. Breaking Bad premiered on January 20, 2008, and throughout its run, earned 16 Primetime Emmy Awards, 2 Golden Globes, 2 Peabodys and was named as one of the “Top 10 Programs of the Year” by the American Film Institute in 2008, 2010, 2012, 2013 and 2014.

Are you excited to see Jesse Pinkman return in El Camino: A Breaking Bad Movie on Netflix? Let us know your thoughts on the trailer in the comment section, and also check out the kick-ass movie poster below. 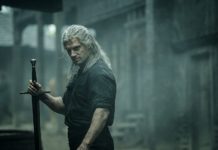