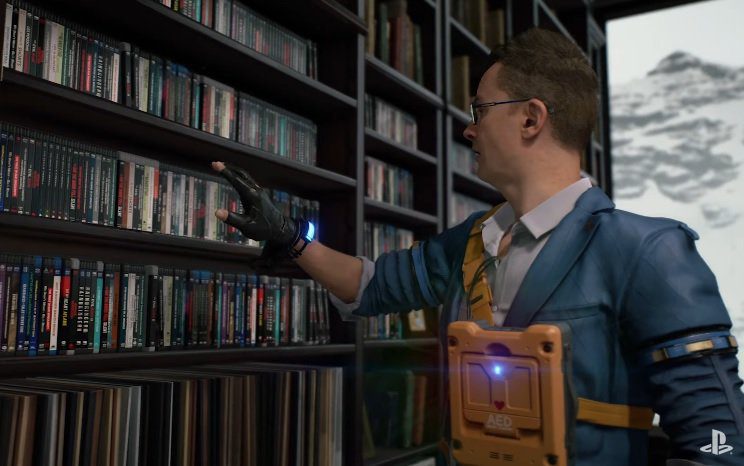 Every time there is something new for Death Stranding I feel like I understand it less. For once after news from Comic-Con, I think something in this game makes some sense. Kojima said a few things while he was at SDCC, but now with a trailer about Heartman, we have some concrete details on an important character. If you do not have any context this trailer may lead to confusion.

For one, I am just happy to have a trailer that does not span 8 to 9 minutes. This may be the first trailer that focuses on a specific chunk of information rather than throwing bits and pieces at us. Played by Nicolas Winding Refn, Heartman’s condition is very intriguing. A man who dies every 21 minutes and goes to the other side of everything for 3 minutes before resuscitation. He is somewhat lost in this world, searching for his family in the next every time he passes a

Heartman is a researcher of the Death Stranding, which makes sense given his affliction. He dies 60 times a day, so he has 3 hours a day to review the other side. A man has to keep busy though, so he keeps different media handy, although ones he can digest in 21-minute blocks. This game keeps getting more and more intriguing.

We also received the gift of box art over the weekend. It features Norman Reedus being very, I don’t know, Death Stranding-y on the front cover. He is holding a bridge baby and his periscope is alert, possibly signaling creatures in the area. The steel bookcase was also revealed, with Reedus much dirtier so this could possibly symbolize the other side.

I don’t know about you, but everything I see on this game excites me more and more. I have no clue just what it is, but I want to play it. Troy Baker recently said Hideo Kojima is not looking to sell copies, he wants to move the industry forward. That is the kind of game I want to pay money for.

Death Stranding will launch on November 8th, 2019. It will be exclusive for PlayStation 4 and is pre-orderable digitally and at local retail stores.