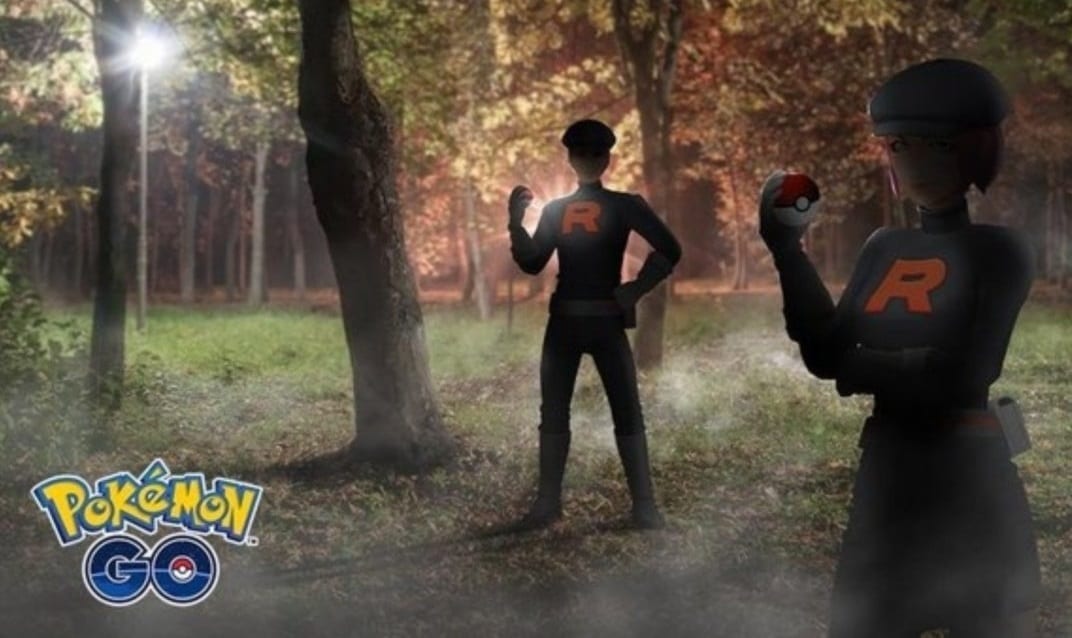 Prepare for trouble trainers, because something nefarious is happening in Pokemon Go. Earlier this week, you might have noticed a rare PokeStop in the distance shaking. Upon getting close enough to actually spin the stop, you would have realized much fewer items received before being ambushed by a Team Rocket grunt and their Shadow Pokemon. Much like the grunts of the main games, these early battles were pretty simple – usually revolving around corrupted starter Pokemon and Rattata. Though fast forward a few days, and Team Rocket is back with a vengeance!

So what exactly is happening in game right now? What does this mean in the long run? And just how does the new ‘purification’ mechanic work? Let’s find out!

Unlike the Rocket grunts in the main games, these Rocket grunts have more varied teams. Initially they were composed of starter evolutionary lines (ie: Squirtle, Wartortle and Blastoise) and the random Snorlax here and there. Though their return has brought much more variety as well as MUCH stronger Pokemon. How much stronger? Imagine a Rattata crushing your 3000+ CP Mewtwo! The power of these new Rocket Shadow Pokemon is much higher than before and you truly need to consider Types and Charge Moves when battling.

Whereas single bar Charge Moves might be better for Raids, you want multi-bar for these Battles. Additionally, you’ll want to pay attention to the grunt’s dialogue as it’ll hint at their team. Though even then, you have to be careful and might need some varied coverage. For example, if they mention Water, take along some Electric AND Grass as the Mudkip line is also up for grabs. If they mention ‘coiled’ you might think ‘Ekans… so poison’. And you’d be right; but remember the Golbat line is also Poison. If that’s the case – as I quickly learned – your Ground/ Psychic counters are in major trouble and Mamoswine might be a better Counter. Some Grunts’ teams are just absurd. My first encounter was one with a Snorlax and 2 Dragonite.

Though despite this difficulty spike, I’m really enjoying it! The most ‘PvP’ I’ve played in this game were the Leader Battles, but those barely count and are far too easy. I did a true PvP battle once – for a quest – and lost terribly so I didn’t feel like going back. But the Rocket Battles are challenging while still offering a solvable puzzle. You want to get better and figure out the best counters for any type they might throw out – and realize how much you’re punished for not considering other type combinations. This is also a great way to showcase the power of secondary effect moves in Pokemon Go – which are being added more and more to the game – like ‘Ancient Power’. If anything, these Rocket Battles train you for true PvP.

Purifying Shadow Pokemon – Is It Worth It?

Okay, so you defeated the Team Rocket grunt. Now what? Well much like Raid battles, you’ll be taken to a Capture screen where you’ll be able to capture one of their Pokemon – usually the first in their line up. The number of balls you have is dependent upon how many of your Pokemon are still standing as well as the level of your Hero and Purifier medals. ‘Hero’ is based on the number of Rocket Grunts you’ve defeated while ‘Purifier’ is tied to the number of Pokemon you’ve purified. But what exactly does purifying a Pokemon entail – and is it worth it?

Well from a ‘Capture’ perspective, absolutely. Even though the Pokemon are pretty simple to catch now, I’m certain stronger – more limited ones – will arrive soon. (More on that in the next section). Though even in a battle sense, purifying a Pokemon has its bonuses – if it’s the right Pokemon. Once Purified, a Pokemon will jump to Level 25 and each of its IVs will jump by 2. This means that if your Shadow Pokemon’s lowest IV is 13, it will become perfect upon purification. Additionally, you’ll get a discount for all future power-ups you give it. Purifying will also give a Pokemon the move ‘Return’, but I can’t really speak to how go or bad it is.

From a collection standpoint, some of you might want to keep your Pokemon in its corrupted shadow form – which is fine. Considering Shadow Pokemon CAN appear as Shiny, a Shiny Shadow Pokemon is DEFINITELY something to brag about and show off! Though if this whole Rocket Invasion is heading where I THINK it’s heading, we might have more reason to refrain from purifying. After all, SOME Shadow Pokemon are much more than just red eyes and a ghostly aura…

Thematically, Team Rocket appearing is a great tie-in for the Armored Mewtwo currently in Raids. As fans of the original series will know, Armored Mewtwo was the form he had while under Team Rocket’s control. Though it’s important to note that the Armored Mewtwo we’re currently seeing in Raids is from the Mewtwo Strikes Back Evolution film – as opposed to its original look in the anime/ Mewtwo Strikes Back movie. This explains (lore-wise) why the Mewtwo in these Raids are weaker than the previously released versions – the armor is to contain its overwhelming power. Though anime tie-ins aside, there’s possibly much more on the horizon considering the history of ‘Shadow Pokemon’

Shadow Pokemon – as well as the ‘purification’ mechanic – were first introduced in Pokemon Colosseum for the GameCube. The foggy sprites we’re seeing now are very reminiscent of their appearance in that game. Though later games would introduce more unique shadow variations. The most famous of these was Shadow Lugia from Gale of Darkness, which had a much more sinister Shadow design. Though there’s another Shadow Pokemon that terrorized players in a much more recent game. Pokken Tournament for the WiiU introduced players to Shadow Mewtwo. The Team Rocket trailer hints are more sinister things to come. Will one of these top tier Shadow Pokemon be it? Whether as a new Research Task or – perhaps – a new Rocket Boss Raid Battle mechanic, I’m very excited to see where this will go!