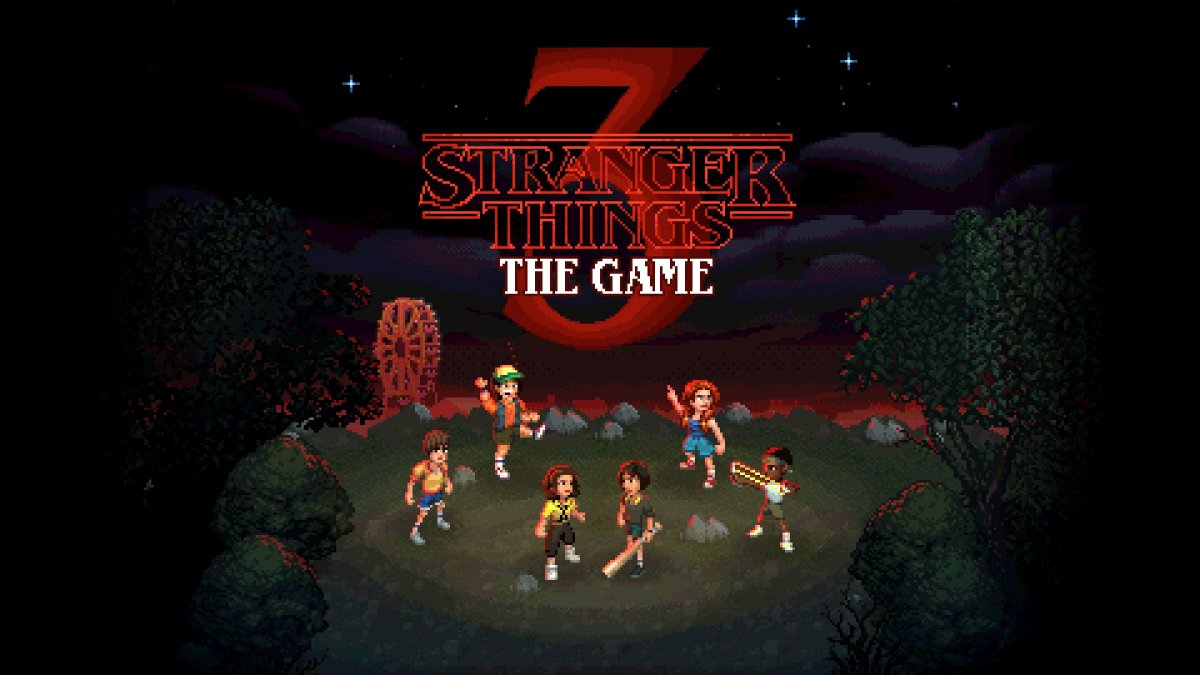 Stranger Things 3: The Game by BonusXP in collaboration with Netflix, is a fun, albeit sometimes frustrating, journey through the latest season of the wildly popular TV Show. 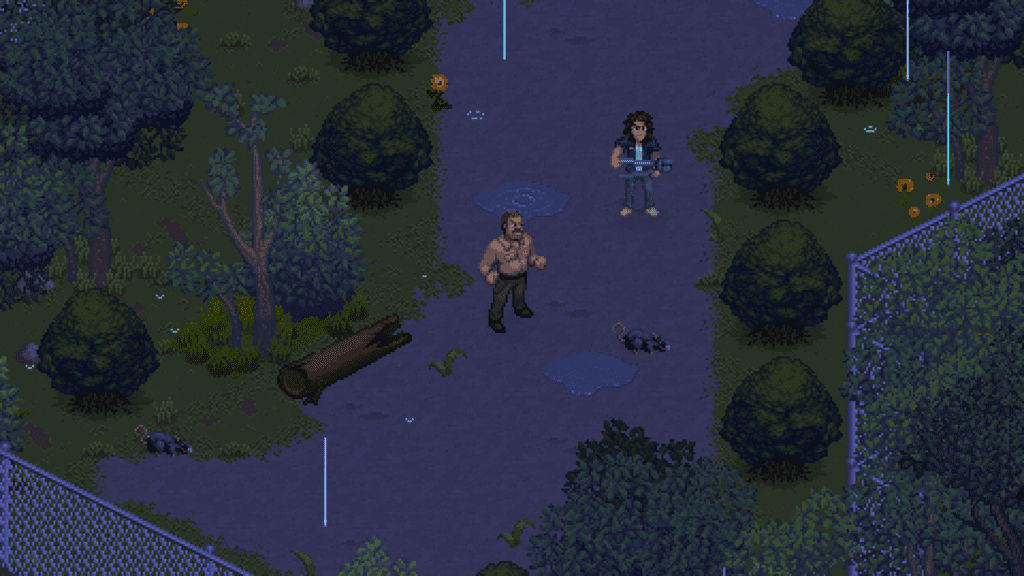 For fear of spoilers I won’t go much into the storyline – if you’ve watched the recent season then there is nothing new here; it is basically an exact play by play of the season with certain sequences extended while others are omitted for the sake of gameplay flow. Essentially you take the reins of Mike, Lucas, Dustin, Will, Eleven, and other members of the show’s great cast as they attempt to find and destroy the Mind Flayer while simultaneously attempting to crack a mysterious Russian Code and infiltrate a scientific base.

To say more would ruin the show and the game. Honestly, I believe players should watch Season 3 before playing as it helps the player to fully understand the scope of the various events which occur during gameplay, and I believe that it increased my enjoyment of the game to play through memorable parts of the episodes. 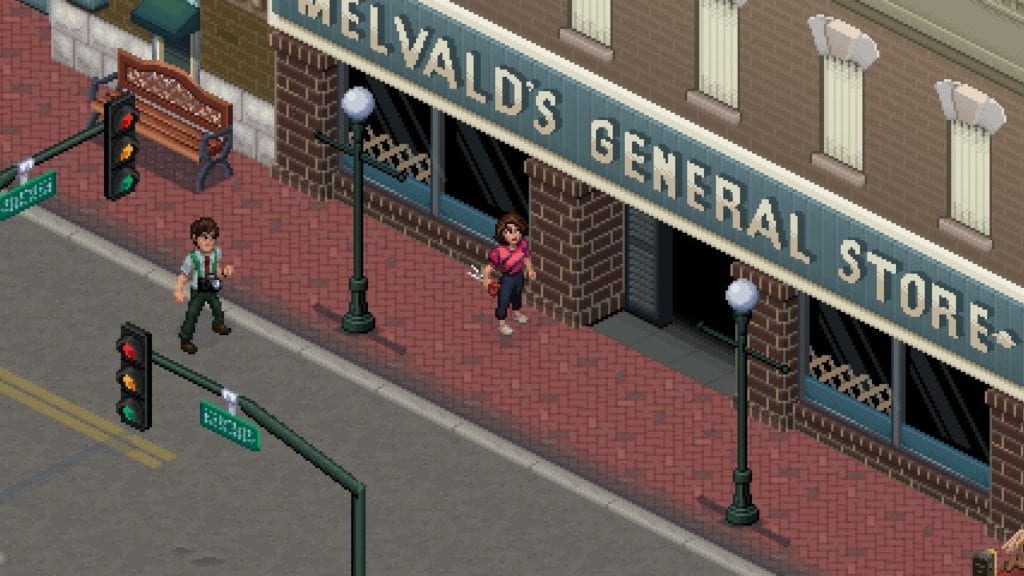 The gameplay is separated into 8 chapters featuring the same names and story beats as their TV counterpart and begins with only two characters unlocked: Mike and Lucas. While other characters are around and can be interacted with, they will not join your party until the chapter where they become needed as a gameplay mechanic.

Each character has unique attributes including their style of attack and their special abilities. Some characters punch, kick, or swing weapons – unleashing impressive amounts  of physical damage against the ever increasing hordes of enemies – while others launch projectiles or, in Eleven’s case, use psychic abilities to hurt enemies from afar. These characters do not cause as much damage per hit, but the damage loss is offset by the ability to attack from afar and avoid taking damage.

Every character that you unlock becomes a permanent member of your party and can be cycled through on demand despite being in circumstances where their character was not present in the show. This is a great addition to the gameplay and really allows you to mess around with each character’s abilities without the fear of being stuck with them should you decide they don’t suit the occasion. Cycling between characters is as simple as pressing the left or right trigger and you can have two players active at any moment which can be switched between by simply pressing down on the d-pad.

Some characters have special abilities which only can be used in specific occasions. Dustin can hack into doors and loot boxes, Joyce can break through chained gates, and Erica can crawl through tight spaces. If you run into an area requiring a specific ability the game will either tell you that you need a specific item or characteristic to proceed, i.e. “This requires a tiny person”, or – if you already have that specific character unlocked – the game will automatically switch to that character to allow you to pass. This is a subtle but extremely handy gameplay addition that takes the guess work out for figuring out which character can handle certain tasks and prevents the wasted time of cycling through characters just to pick the one necessary for the moment which is extremely helpful during stressful fights or situations. 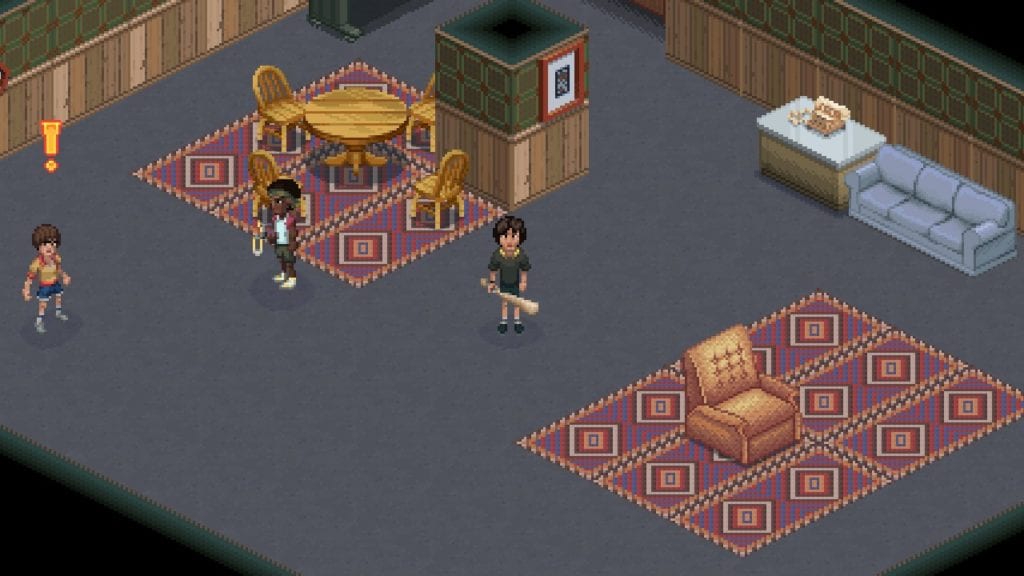 The game itself is a mixture of beat em’ up gameplay and puzzles. A majority of the game focuses on you either fighting rats, mind flayer victims, Russians, scientists, or other enemies with the occasional boss fight thrown in. While most of the regular fighting is straight forward, bosses often feature secondary objectives, i.e. turning on the power or keeping two characters separated, before you can gain the upper hand. Don’t let the earlier chapters fool you, the game quickly ramps up its difficulty as you progress and by the end you’ll be alarmed by the sheer number of enemies thrown at you in some situations.

I was surprised by the number of puzzles scattered throughout the game and how frustratingly difficult they were. While many have clues scattered throughout an area as to how to complete them, these can be vague and require out of the box solutions that some – including myself – didn’t always consider. The puzzles often involve pressure plates which must be stood on in a specific order and thankfully you can tell the other characters when to wait in a specific spot or to follow you, which tremendously helps when needing your two characters to be spread out to solve a puzzle. I’m not afraid to admit that on more than one occasion I had to take to the internet in hopes of finding the solution so the frustration of not solving a particularly nasty puzzle didn’t cause me to lose interest in the game.

That said, I appreciate the work that BonusXP put into the puzzles and after knowing the answer it was often almost laughable as to what I missed, although there are still a few puzzles that I have no idea how you’d figure out from clues alone without a lot of trial and error. Still I enjoyed the fact that the puzzles allowed a break from the repetitive fighting.

The game is separated via a world map which allows you to hop between open areas at will. Of course, you begin with very little available to you but as you progress you will gain access to nearly every important location from the TV series.  There are eleven areas available to explore, each featuring expansive areas to search with hidden items and multiple hidden rooms. Once inside an area you can open a map which will show you what you’ve uncovered and an exclamation mark designating quests. A yellow exclamation mark means it is referencing a main story quest, while a blue exclamation mark designates a side quest or an errand. 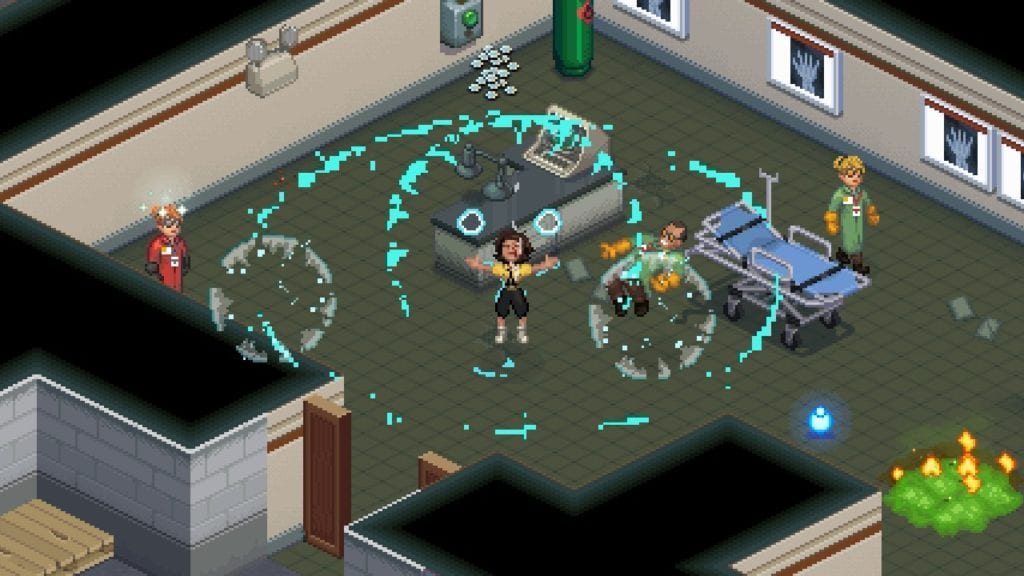 There are quite a few errands available to you which have no effect on the main storyline but often do reward the player with various useful items. Speaking of items, there are tons in the game and an interesting, if not always necessary, crafting option. Through crafting you can create various trinkets which can be attached to your party to increase various stats such as hit points and attack power. Up to five trinkets can be active at once and can be swapped at any time to better deal with specific situations. These trinkets range from items that are spread across all party members, to items that deal with specific attacks. I mainly stuck with trinkets that increased my overall health and attack powers, despite the wide selection.

There are 12 playable characters in the game, but a few won’t be unlocked until Chapter 7 or so, so don’t expect to have access to everything quickly. Still, the fun of finding new characters and then playing around with their various abilities never wore off and by the time I was sick of using the characters I had unlocked another would come along and ramp up my enjoyment considerably. Also, since I mainly stuck with projectile weapons, one late appearing character definitely made me happy as they had one of the best projectile attacks in the game.

Overall I enjoyed the mix of retro beat em’ up style and puzzles and despite a few frustrating areas I still enjoyed my time running around Hawkins. 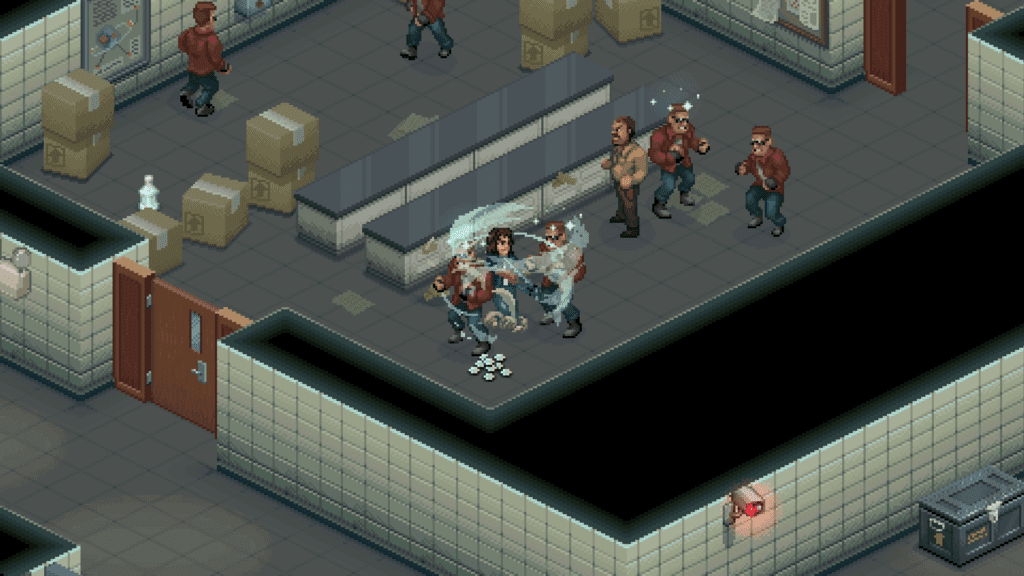 Stranger Things 3: The Game opts for Super NES style graphics, which is a bit odd considering NES style would have fit the show’s aesthic a bit better, but still the game looks great for what it is and features some creative uses of the sprites to tell the story. I particularly like how the Mind Flayer segments were handled.

That said, don’t go into Stranger Things 3: The Game expecting anything more than retro graphics and gameplay features. There is no voice acting, all dialogue is presented on screen, and there are retro versions of the show’s theme and other songs throughout rather than the full fledged orchestrations.

I’m a sucker for Super NES and days past, so I enjoyed the nostalgia the game’s graphics brought, almost reminding me of Zombies Ate My Neighbors.  Also, you can play the game in split-screen couch co-op, which is always a plus! 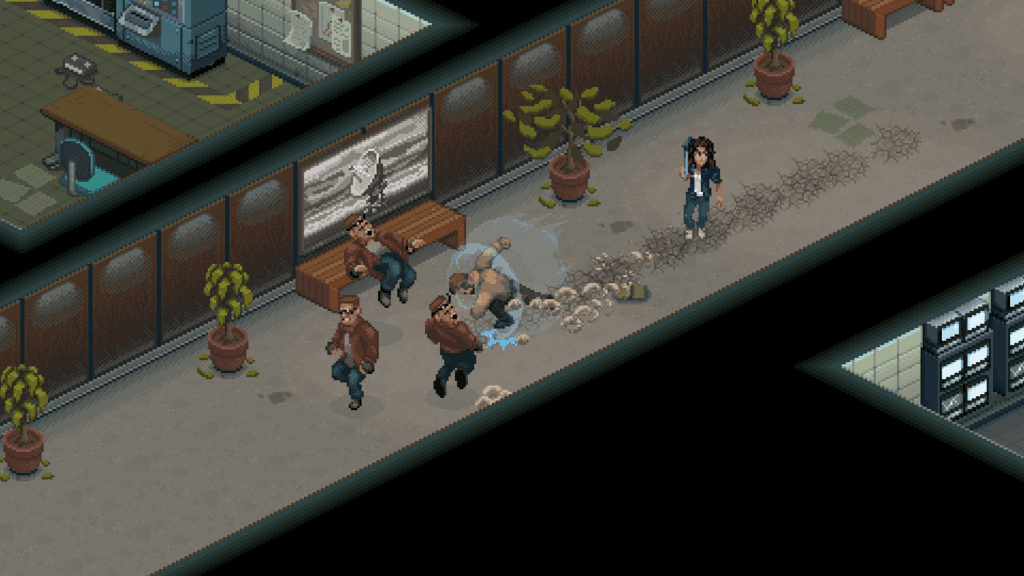 Stranger Things 3: The Game is surprisingly long. I expected no more than 4 or 5 hours but clocked my time at around 11 Hours, although the game clocked me at 9 and a half. I’m assuming the game’s clock froze whenever I was crafting or during cut scenes, etc whereas I timed thouse as well. Still, you get quite a bit of gameplay for your buck.

Once you complete the game you can continue exploring, using all 12 characters to visit every inch of the map, continue to craft new items, and to find the 50 gnomes hidden throughout the world. If you’d rather start over, you can try another difficulty option, of which there are three: Story, which allows you to play through the game with little difficulty, Standard, which is normal difficulty and will present a bit of a challenge, or Master, which is the hard mode and should probably be handled on a second playthrough only.

Or, if you really want a challenge, after completion you unlock Eliminator mode which allows you to begin the game with all 12 characters unlocked but if any character dies during your playthrough they will remain dead the rest of the game – so you’ll lose any abilities pertaining to that character. The goal is to survive the game with at least one character remaining.

How much you enjoyed the puzzles and beat em’ up action your first time through will ultimately decide the replaybility factor of the game, but I feel that most people will at least take the time to explore the world after completion in hopes of finding all the areas they may have missed. 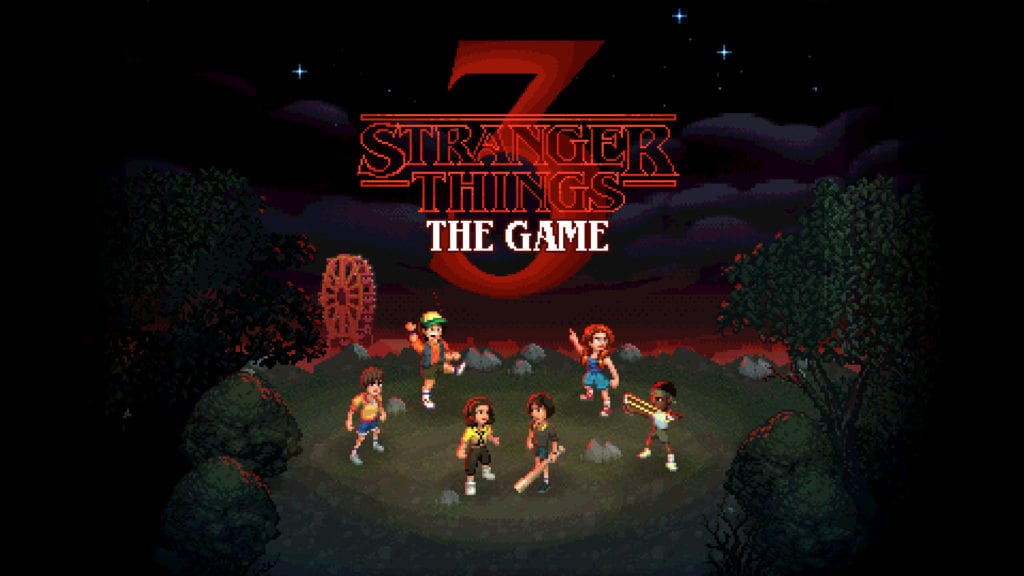 I enjoyed my time with Stranger Things 3: The Game, but I’d be lying if I said that I didn’t get bored at times or downright frustrated at others. Still, I persisted, and that fact alone means that the game held my attention despite the somewhat repetitive nature of the gameplay.

I’m a huge fan of both retro gaming and the Stranger Things tv show, so getting to spend a bit of time in Hakwins with these characters was a welcome experience and made me even more excited for the what the future holds. If you’re a fan of the show, beat em’ ups, creative but often frustrating puzzles, or Stranger Things, then this is a game worth your time.

Stranger Things 3: The Game is available now on Xbox One, PS4, Nintendo Switch, and PC for an MSRP of $19.99. A review code for the Xbox One was provided to Fan Fest News by BonusXP for the purpose of this review.