SolSeraph is a 2.5D side-scrolling action game mixed with a village strategy sim in which you must, as Helios, both defeat enemies and help raise villages. It is both modern and retro at once, helping to create an entertaining mixture of genres throughout its run time. 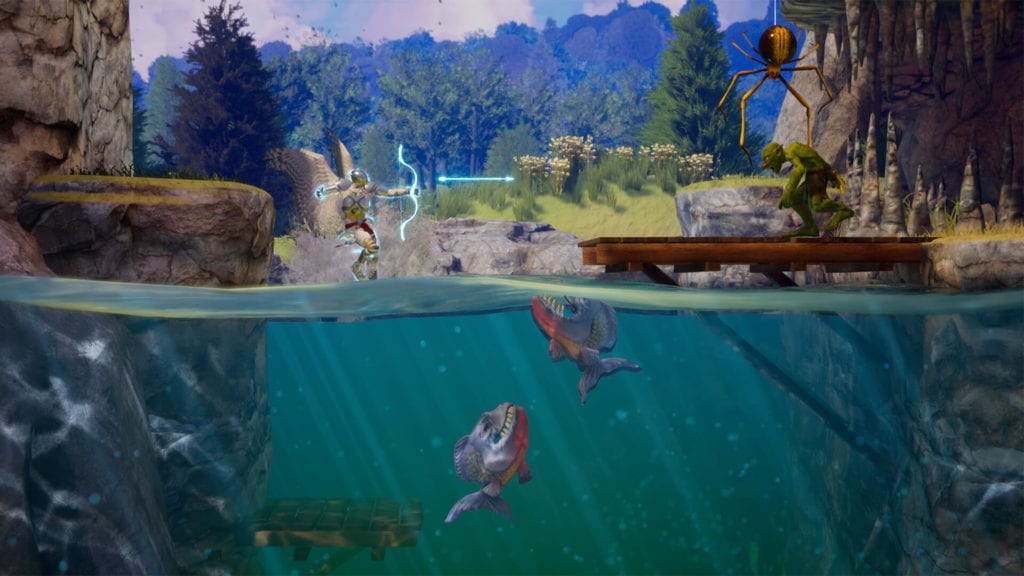 In the beginning, Chaos ruled. Powerful and evil, Chaos kept other Gods at bay. Eventually, Sky Father and Earth Mother drove Chaos away after a magnificent battle. Sky Father and Earth Mother then created animals, and finally the humans – their favorite creature. Content with their work, they retired from the land of men, leaving the young human race to fend for their selves. The Younger Gods, unhappy with Sky Father and Earth Mother’s creatures, grew to resent humans, especially their need to create stories. The Young Gods began to torment the humans with fires, storms, and floods leaving the human race scattered, scared, and facing a slow death. Heeding their calls for help, Helios, Knight of Dawn, child of God and Man, came to humanity’s aid to slay the Young Gods and to bring down Chaos. 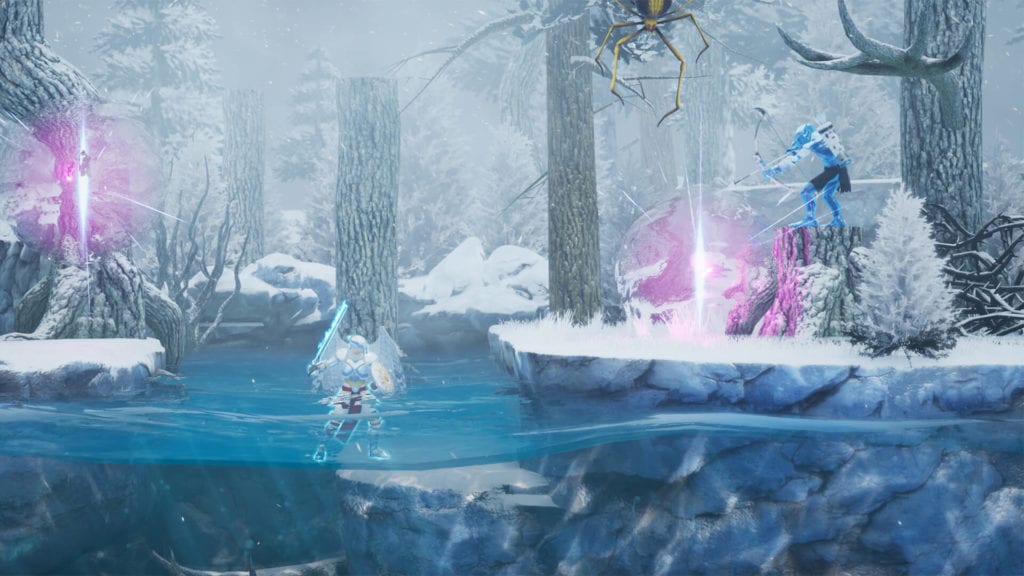 SolSeraph contains a mixture of gameplay styles. There are 2.5D side-scrolling levels, which consist of basic hack and slash action, and top-down village sim/strategy style levels, which has you guiding fledgling villages in their quest to overcome the odds and become self-sustaining.

You begin the game in a 2.5D level; enemies bounce toward you from the background, appear from the foreground, or attack you from a level playing field. This combination of attacks continues throughout all 2.5D levels, keeping the levels fresh as you never know from what direction an enemy may appear. Some remain in the background or foreground, shooting arrows, while some will eventually meet you in the middle and attack.

After the initial level, the world map opens up with six villages. Helios can fly between these villages in any order and choose who to help, although you do eventually have to help all six. Once a village is chosen the game switches to an overhead village builder, where Helios can then listen to the prayers of the various characters as they discuss their obstacles and fears, and then help them build their village. These interactions are both funny and thought-provoking, as each village sees their world in a different light and has their own set of goals. 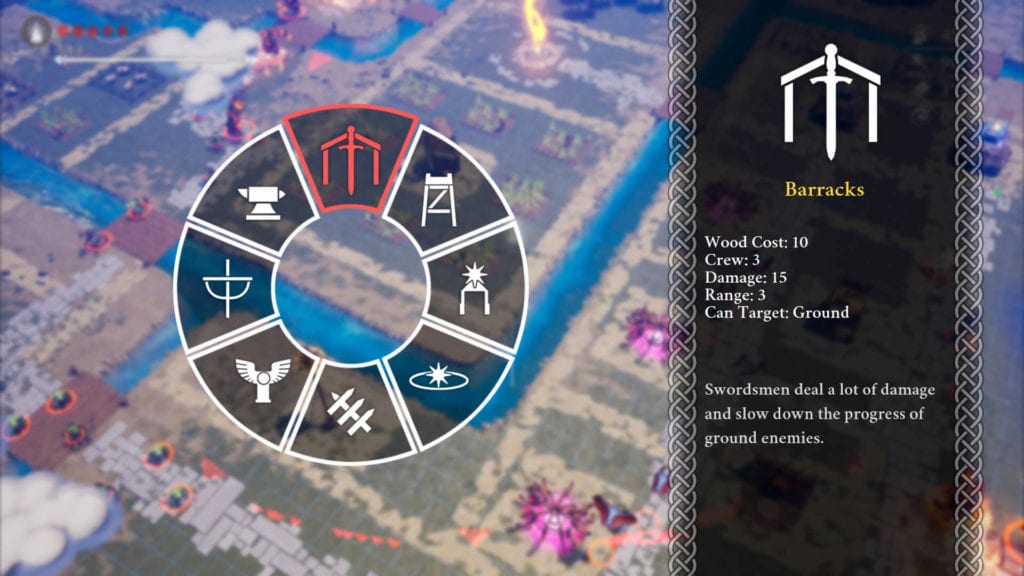 The gameplay is these village areas is where the real meat of the game lies:  Each village has multiple lairs hidden in a black veil of clouds scattered throughout, which you must eventually vanquish. After defeating a lair one of the main barriers, covering the Young God terrorizing that village, is brought down. Once all the lairs are destroyed you can then fight the Young God to bring peace.

But first, you must create farms, tents, barracks, watchtowers, magic towers, lumber yards, archer towers, and more. There is a constant struggle to build up your villagers, maintain your wood, and provide enough food, while also creating more advanced defenses. With each lair you take down you open yet another path for enemies to spew from in their never-ending waves of attack on your village.

Each station you create must have at least one villager assigned to it. To gain villagers you must create tents, which grant you five people each. But tents require farms, and farms require fertile lands – and you must handle these difficulties while also maintaining your defenses as the enemies do not stop for long between each wave and grow in power over time. 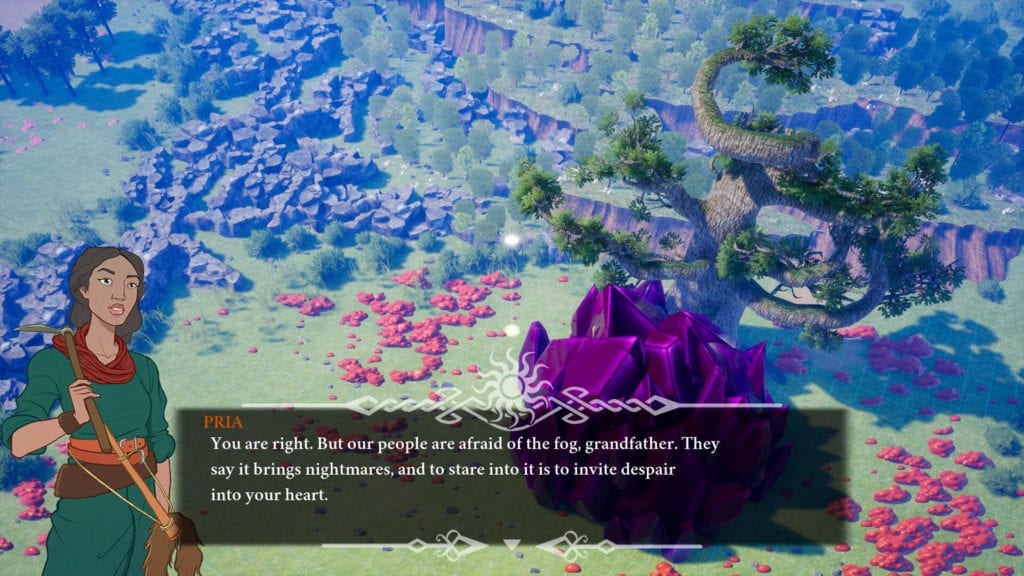 The goal is to prevent the enemy from reaching your central bonfire. The bonfire can take five hits before you’ll reach a game over screen. To help fight off particularly nasty enemies you, as Helios, can give help in the form of Lightning or Sun attacks from the sky.

You have to expand your road system to reach new areas, which is a must if you want to continue finding fresh supplies of wood and land to build on. Upon reaching a lair you must build a temple to dispel the black clouds, which allows Helios to jump into the lair and defeat the enemies inside.

Entering a lair switches the game back to A 2.5D perspective. These levels are usually simple and consist of destroying all enemies, normally in two waves, after which you are given an upgrade to either your Health or Mana.

Mana is used by Helios for various secondary weapons including a bow and arrow, ice, lightning, fire, ocean, and leaf protection. You begin the game with the bow and arrow, which I used throughout almost the entire game despite the other options, and gain the others as you defeat the Young Gods. 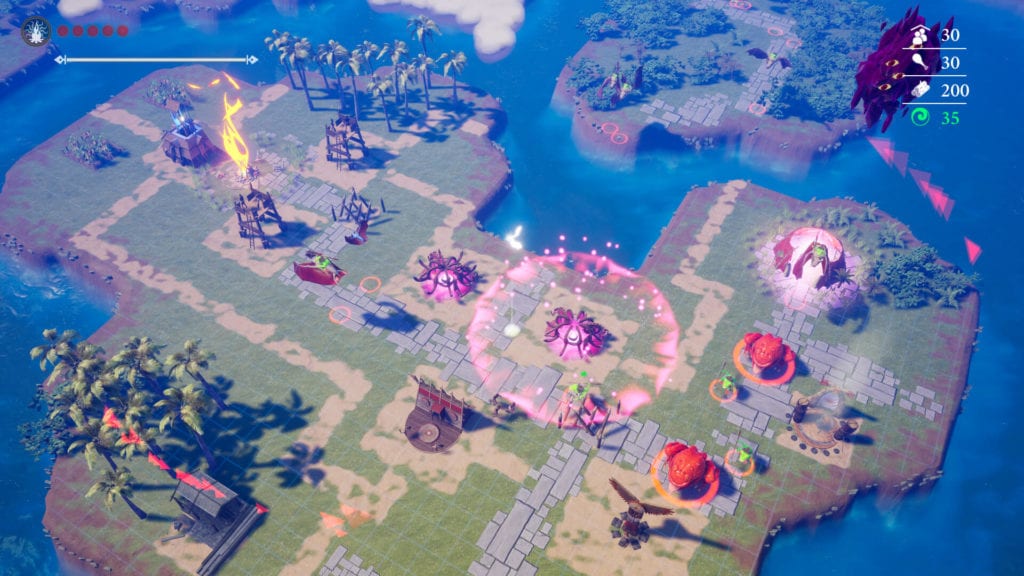 Boss levels are 2.5D but feature branching paths, allowing you to find mid-level bosses which grant upgrades to your weather powers, as well as giving Helios the freedom to reach the end in a number of ways. A few levels have checkpoints, but most do not. You are not required to defeat all the enemies in these levels to progress, although it is in your best interest to do so as many will follow you straight to the boss otherwise.

The bosses are varied and each have specific powers and can put up quite a fight. If you find that a boss or its level is too difficult you can always leave the village you are in and begin work on another village, steadily building your health and mana before jumping back into previous villages to destroy the boss with your new skills.

If this sounds like a lot to keep up with, no worries: it is quite simple when in play. The villages take a bit to adjust to but you will eventually find that defending and branching out simultaneously become second nature. The hack and slash areas are a bit tougher as Helios tends to control a bit on the clunky side, is frustratingly slow, and has difficulty turning mid-swing. It is also unfortunate that you cannot move the camera to look up or down while on a ledge, as the branching levels sometimes have you jumping blindly into enemies. I’m all for a challenge, but I don’t appreciate cheap hits and death – both of which SolSeraph has.

The strength of its characters and the sim sections is what kept me progressing, as I was constantly entertained by the growing difficulty and need to help these poor characters survive. The 2.5D level’s charms had worn off on me by the end, leaving me to plod my way through to get to the next sim sequence. Although a few levels did feature creatively designed sections which brought back my enjoyment.

SolSeraph is a retro game at heart and as such the graphics are serviceable, but not impressive. The character animations can be a bit clunky and while there is a diverse roster of enemies, they are all essentially the same types with appearances cultivated to match the level’s aesthetic. You’ll always have the single warrior, the archer, the flying creature, the warrior riding an animal, etc. In some levels, these may appear as skeletons, while in others it may be frogs, but in the end, their attacks never really differ.

The backgrounds are diverse and change depending on which village you are in, but there weren’t any set pieces – graphics wise – that stood out. That said, the graphics never bothered me and did not detract from the gameplay and in no way hampered my playthrough. 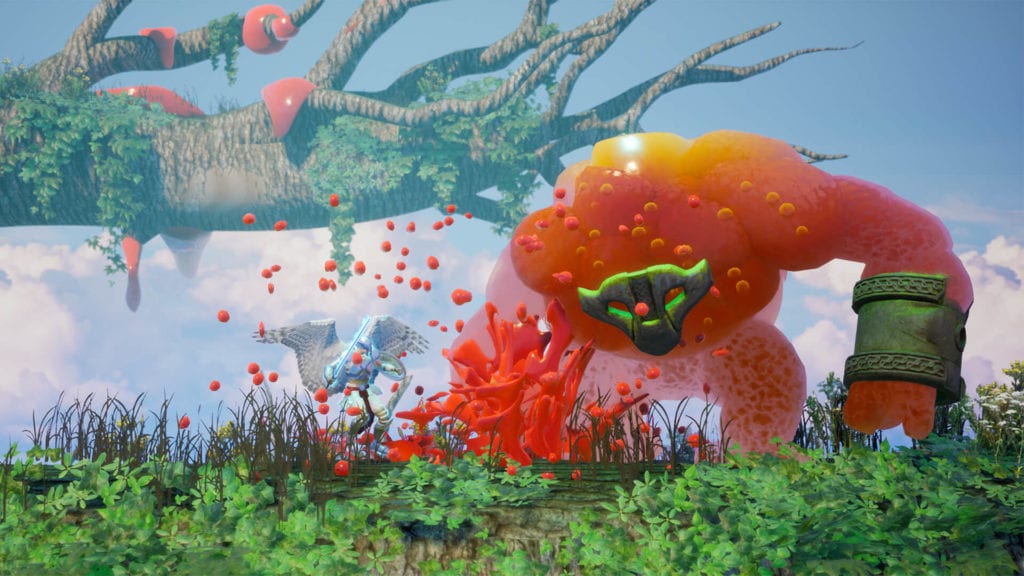 I clocked my playtime right at eight hours – a decent length for a $14.99 title. While there is no New Game+ option, you could go back through to find all the hidden upgrades and to see how long you can last against the relentless waves of enemies. You are free to explore at will up until you enter the final level, so take time to jump back into any village and continue to play around and grow your town before heading off to complete the game. Fair warning though – there is little reason to continue to build your towns after completing an are, as there are no longer any threats.

I didn’t feel the need to replay SolSeraph after completion, although I was only two trophies off from 1,000 gamerscore and debated restarting just to obtain those two. If I had read the trophies beforehand I could have easily completed those in my initial playthrough though.

Still, the length felt right and the game never overstayed its welcome.

I enjoyed SolSeraph for what it is: a quick jaunt through a retro-inspired hack and slash / strategic sim with fun characters and interesting gameplay mechanics. Sega and Team Ace have created a spiritual successor to the retro hit ActRaiser and fans of that title should be in for a welcome surprise. For a game that seemingly materialized out of nowhere, it was a welcome change from the rather stale hack and slash genre – with its strategic elements and focus on character-driven narrative – and I found SolSeraph to be an enjoyable, albeit sometimes frustrating romp, through a battle of the Gods.

SolSeraph will be available digitally on PS4, Xbox One, Steam, and Nintendo Switch on July 10th, 2019 for an MSRP of $14.99. An advanced review code was provided by Sega and Team ACE to Fan Fest News for this review.