When watching any good horror or monster movie there has to be a certain degree of build up. That’s the backbone of the horror genre. You can’t just give away the ultimate scares or the look of the monster right out the gate otherwise it’s meaningless. No, those reveals or scares come towards the end of the films when they’re earned. When everything has built to this one moment that you can no longer escape. It’s the shark jumping out of the water in Jaws. It’s the end of Paranormal Activity. These reveals and scares work because we traveled down a path that leads us there, and Swamp Thing seems like it may be creating something similar. We are now two episodes into this first season and the Swamp Thing has probably had five to seven minutes of actual screen time, and I would argue that that has been a perfect use of the character thus far. When you have the equivalent of Frankenstein’s Monster, equipped with its own little girl, coming out of the swamp you want to build that mythology. Less is more. Make everything the creature does count, and Swamp Thing seems very hyper-focused on doing just that.

After an opening that saw Alec Holland freaking out over what he’s become in a very graphic removal of swamp muck from his person, the episode quickly shifted back to its main focus, Abby Arcane. Abby is dealing with the apparent loss of Alec who can’t be found after his boat exploded. I would argue that Abby might have “fallen” for Alec a little too quickly, but I understand that there needs to be a driving force here. The two shared only a few scenes together, and while it seemed that something could be building, I’m not entirely sure that that possible blossoming romance would leave Abby as devastated as she currently is. This is a plot thread that feels a little more out of the CW Arrowverse, and at times Swamp Thing seems like it would fit perfectly with shows like Arrow and The Flash… then someone gets ripped in half by swamp weeds and you’re left feeling not so sure.

Despite Abby’s loss, she’s there to solve the mystery of the swamp virus and reaches out to Holland’s boss who just so happens to be Avery Sunderland, the man who apparently runs all of town, is the father of the daughter Abby killed, and Abby’s adoptive father or adoptive father equivalent? It is clear that Sunderland is a shady dude. We learned that he hired a scientist to create this accelerant to put in the swamps but neither party was aware that it would create some super virus. Abby strikes out in the hopes of picking up where Holland left off with his work, and that makes sense considering Sunderland doesn’t want to get implicated for what’s happening to his town. I love how Avery and his wife Maria’s interactions with Abby are so entirely different. Maria most definitely wants Abby dead, or at the very least to suffer for “killing” her daughter, while Avery would rather maintain the relationship to possibly manipulate at a later date.

Speaking of Maria Sunderland, it would appear that she sees a voodoo woman therapist that allows her to have some sort of contact with her daughter. Except, this time something is all wrong. The swamp is contaminated with more than just this accelerant and there are some dark forces moving within these waters. Our voodoo therapist pushes Maria to let her daughter rest, but like any grief-stricken vengeance seeking mother, she can’t. I’m not entirely sure how her dead daughter ends up in bed with her at the end but it was quite the sight. One of the early strengths that Swamp Thing has provided has been this growing mystery surrounding the town and its people. We already know that the Sunderlands have something going on with corruption and dark magic respectively. Outside of that, there are these illegal boxes in the water, the virus, outside scientists, and a town that holds a grudge against anyone who leaves. Especially when that person might have killed their best friend.

Abby strongly believes that the answers she needs are in Holland’s work, but the police have confiscated all of his stuff. All that’s left are some video journals where he speaks about getting fired and having the hots for a certain doctor. Good thing that Susie Coyle, Patient Zero, breaks out of the hospital and is out spreading her yuck all over town. Susie appears to have some sort of connection with the Swamp Thing creature, again very reminiscent to Frankenstein’s Monster, and is in the swamps searching for him. He’s in pain. He’s confused and somehow this little girl is going to guide him. Their connection is most likely linked by the virus she’s housing but adds more mystery to a show that is building quite the lore.

Naturally, Susie stumbles into some trouble, is chased by an angry fisherman who killed a cop, and is saved by the creature. It’s our first time seeing Swamp Thing in action and it doesn’t disappoint. Kudos to the effects and make-up teams here as Swamp Thing looks incredible. Once Susie is saved, Abby conveniently shows up and spots her with the monster. I’m starting to doubt Abby’s degree because this is the third time in this show that she just doesn’t seem concerned with contracting this virus. Holding Susie and cuddling her on the boat all seem like bad ideas and a good way to land yourself in a hospital. But it does bring results as we learn Susie can talk with the creature and reveals his name is Alec Holland. Insert intense music here.

Two episodes in and Swamp Thing continues to build the intrigue and to weave in some solid scares throughout. It feels like a blend of these new DC Universe shows as well as the Arrowverse shows we’ve grown to love. I’m curious to see where we go from here. Keeping Swamp Thing on the outskirts of the show is the right decision but I worry that the series might try to juggle too many different mysteries within the town. So far though, Swamp Thing has been an enjoyable watch and I’m looking forward to what comes next.

How about you Geeklings? What did you think of this second episode? Is the virus bonding Susie and Swamp Thing? What’s the deal with the dead girl in Maria’s bed? Does Abby fall in love to easily? Sound off in the comments or if you’d like to talk more Swamp Thing with yours truly you can find me over on Twitter @iamgeek32. I’ll be back next week with a brand new review, in the meantime, try not to get stuck in the swamp! 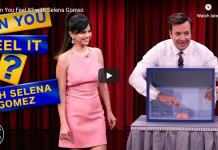 Jimmy Fallon: Selena Gomez Plays ‘Can You Fell It?’