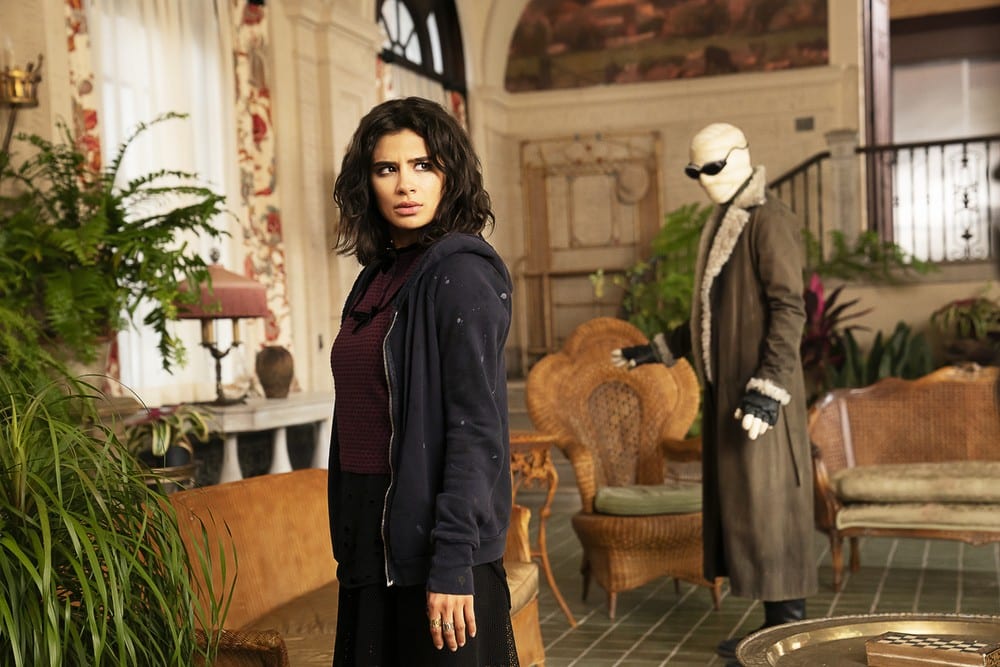 Man, this show is weird and I’m no longer sure if I’m using that as a compliment or not. Doom Patrol started off as a breath of fresh air within the DC Universe and now it almost seems like a certain amount of energy is required before viewing. That’s how weird the show is. Farting donkeys and meta-narration are one thing but introducing an end of the world apocalypse scenario that includes a literal eye in the sky five episodes in seems to be a bit much. I’m still enjoying the series but the depths of weirdness are starting to take their toll on me. I no longer understand if the show is being weird to shape this universe or being weird for the sake of being weird, and that’s sort of compromising the experience.

This week picks up with the end of the world storyline from last week and luckily this is just a two-part adventure, any more and it would have felt like pushing it. This type of storyline seems a bit high risk for Doom Patrol as the show has kind of giving off the impression that they’re dealing with more isolated strange tales. The quest to rescue Chief from Mr. Nobody, don’t throw up, is a more manageable story for this group to navigate. I understand that the end of the world allows characters to look deeply at themselves and come out the better, but for the most part this cult arc looked to explore just how weird things could get.

Yes, we’re given moments with Rita where she becomes matronly and wants to be helpful, even though she is still treated as a nuisance by the rest of the group. Chief’s dismissing of her left a sour taste in my mouth. Mr. Negative still hasn’t made peace with his energy force and is told by Chief to maybe embrace it with no explanation of what the force is or wants. Cliff still wants to be a dad and take care of Jane and I didn’t see any real growth from him this episode. And Cyborg still is finding his voice as a leader while suffering from some very intense daddy issues. This arc didn’t do much for the show as we’re left in the same place we were before the eye in the sky arrived. Mr. Nobody has Chief and the group has to figure out how to get him back.

The best parts of the episode center around Jane and the discovery of her main personality, Kay. There is a great deal left to be explored but there’s no denying that anytime she’s on screen she becomes the most interesting part of the show. I’d be happier if the show took the weirdness as an opportunity to explore her, and the other characters more deeply. The Doom Patrol can be a rich and complex cast of characters that deserve our exploration if given the opportunity. Rita and her search for value after losing such a superficial job. Larry and wrestling with his sexuality and displacement. Cliff’s search for redemption and his daughter. Jane finding peace and family. These are all interesting storylines that seemed shelved so we can have a dance scene and a staring contest in the sky.

Luckily Alan Tudyk returns this week, after two episodes off, and helps the show recover a little focus. Tudyk has been an absolute gem in this role and I would really like to see the show expand his character some. He makes for a great fourth wall breaking meta-narrator but I think it’s time we give him some legs and let him stand. He is the villain after all and should have the most depth and complexities. What’s his drive? What’s his weakness? The more of Alan Tudyk we can get the better.

On the whole, I feel these last two episodes saw Doom Patrol lose some of its shine. Dogs with invisible tattoos are and floating unicorn heads are fun but also distractingly unnecessary to the plot. I’m still enjoying my ride but hope Doom Patrol can focus and rein things in a bit. Keeping the scope this massive doesn’t seem to be in the best interest of the show or the characters. Weirdness can only go so far.

What did you think Geeklings? Are you all in on the weirdness or would you like more character-centric episodes? Are you happy this cult arc is over? Am I overreacting a bit? Sound off in the comments. If you’d like to talk more Doom Patrol with yours truly throw me a line on Twitter @iamgeek32. I’ll see you all here again next week, let’s hope things stay weird but get more focused.