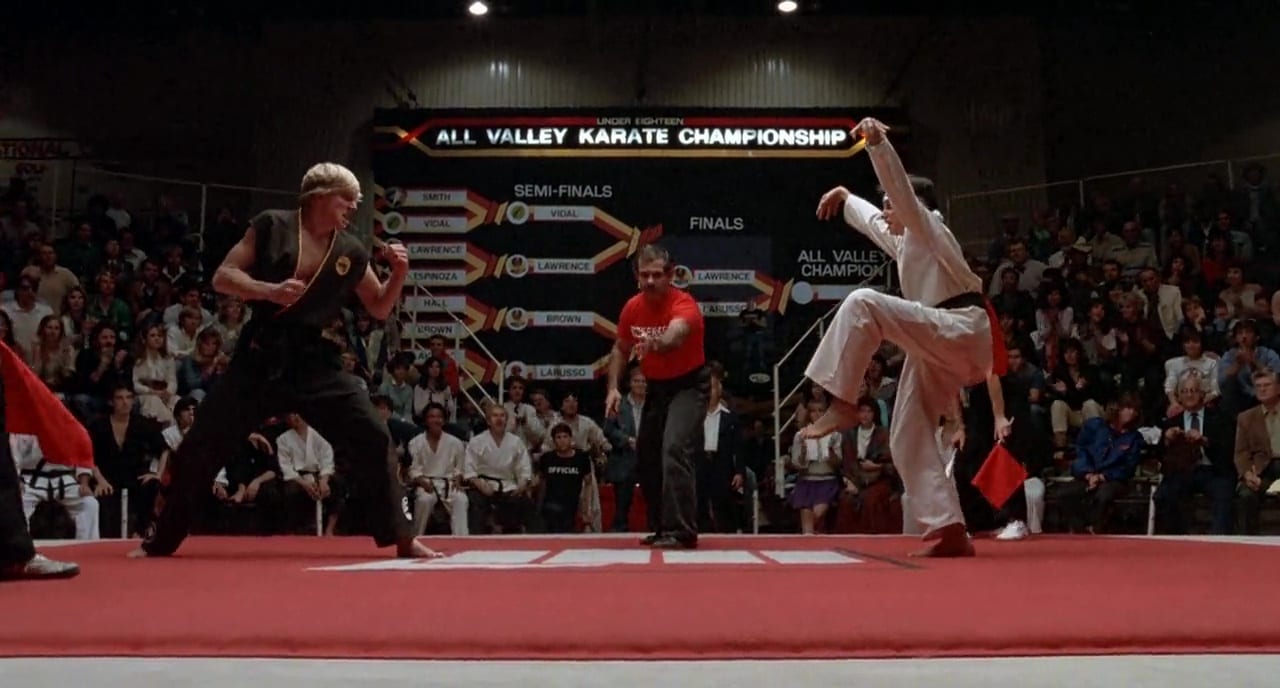 Can you believe that it has been 35 years since Daniel LaRusso learned the ways of Miyagi-Do karate and destroyed a bunch of ruthless bullies?  Well, such is the case as the iconic 1984 film The Karate Kid is getting ready to celebrate yet another cinematic milestone.  News broke yesterday that a celebration is in order.  For two days only (March 31 and April 2), the film will screen at select theaters nationwide as a Fathom Event.

That’s right, old and new fans alike will be able to relive the emotional roller coaster that is Daniel LaRusso.  We will get to take in an amazing sound track with quintessential 80s flair and bask in the warmth of Mr. Miyagi’s tough love and kindness.  The debate of whether or not a crane kick is legal according to the All Valley Karate Championship Rules will ensue.  Many viewers will briefly contemplate if they should gather their friends to dress in sweet skeleton jump suits for this year’s Halloween festivities.  Heck, maybe you’ll go buy a bonsai tree for your desk or try to catch a fly with chopsticks.  Regardless, one can never see this film too many times; and what better way to convince yourself of that sad fact than with an enticing offer regarding its continuation?

To make this re-release even sweeter, it was also announced that fans in attendance will be treated to an exclusive Cobra Kai Season 2 preview.  Details regarding the highly-anticipated second season of the smash YouTube Red hit have been far and few between, but, hopefully, some questions will be answered for fans with this exclusive look.  Tickets will go on sale February 15th.

In addition to the theatrical re-release, Sony Home Entertainment will give fans the opportunity to purchase the film in 4k Ultra HD resolution on April 16.  Not much has been revealed about the copy’s bonus content, but an anniversary feature titled “Remembering the Karate Kid” will be included with interviews from Ralph Macchio, William Zabka, and Martin Kove.

Personally, The Karate Kid is one of my all-time favorite movies, and Cobra Kai has done the original franchise justice.  The writing is superb and the character development has been great.  I’ve always tended to side with Johnny Lawrence and his Cobra Kai brethren, and I love how both sides of the story hold such importance in Daniel and Johnny’s unique relationship.  With the critical acclaim that accompanied the series, one should not forget the films that started it all. Although the sequels and later reboot were not nearly as successful, each film built upon itself and further immortalized Daniel and Mr. Miyagi. Truly, it is absolutely amazing how popular this franchise has become over time.