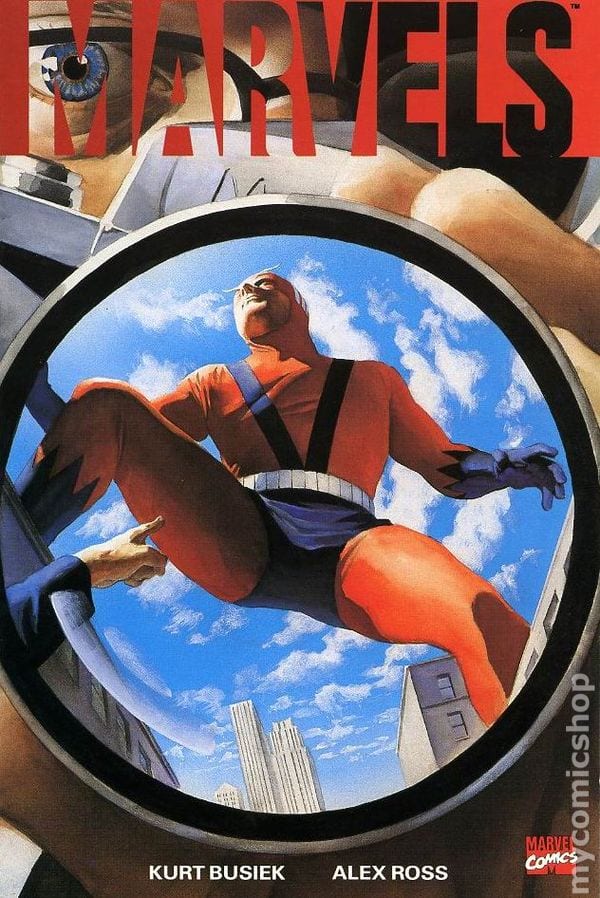 Marvel Comics is planning a celebratory year for the 25th anniversary of the much loved Kurt Busiek penned, Alex Ross painted Marvels mini-series.  First up is an annotated edition, similar to the Watchmen Annotated edition that DC put out last year.  The new edition will include commentary by Busiek and new painted covers by Ross, along with a cover gallery, articles, and introductions from other editions of the trade paperback.

Not content to stop there, Marvel plans to issue variant covers for many of it’s comics.  Some of the most popular series at the House of Ideas will receive covers painted by Ross, while others will feature other artists paying homage to the fully-painted four issue limited series.  The first in line to receive this special treatment is Fantastic Four #6, which comes out this month.  FF #6 will be followed by Tony Stark: Iron Man #9 in February and Immortal Hulk #16 in March.  These first three, for certain, are receiving painted variants by Ross.  The celebration continues through June, with the as-yet-unnamed-artists taking over in April.

Marvels was a hit back in 1994 when it premiered in it’s fully-painted glory.  Fans reveled in the story of Phil Sheldon, photographer for the Daily Bugle in 1939, as he witnesses the birth of the super-human in the form of the first Human Torch.  Sheldon’s story carries through the 1970’s, touching on all the major characters’ first appearances, along with the biggest Marvel events such as the coming of Galactus, and the dawn of the X-Men, all from the average person’s perspective.  Phil Sheldon interacts with, and documents, them all.

Busiek went on to produce a sequel, Marvels: Eye of the Camera in 2008, and Warren Ellis riffed on the theme with his dystopian two issue mini-series Ruins, but neither were as wildly popular as Busiek and Ross’ original work.

Previously,  Marvel Editor-in-Chief C.B. Cebulski promised new projects from Busiek and Ross to commemorate the anniversary of their most famous pairing, but nothing has since been announced.  Whatever it is, with Busiek and Ross in the drivers’ seats, fans are in for a treat.