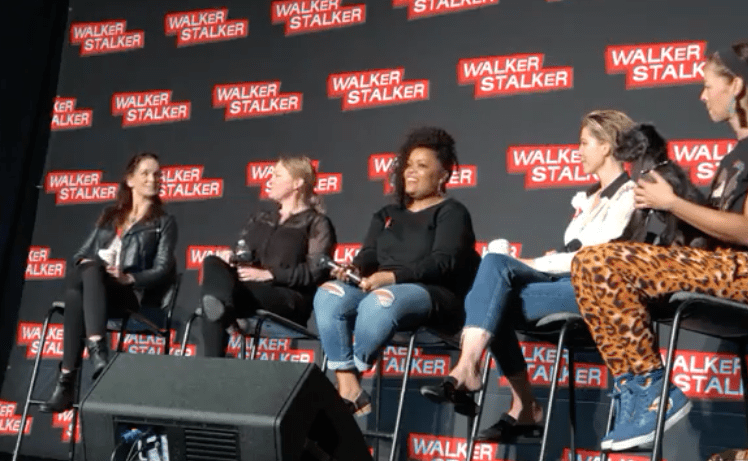 Walker Stalker Atlanta is in full swing this weekend at the Georgia World Congress Center for the biggest Walking Dead fan meetup all year!

One of the panels brought together some of the convention’s fiercest women when Sarah Wayne Callies, Melissa Hutchison, Yvette Nicole Brown, Jenna Elfman, and Pollyanna McIntosh took the stage to bring all the girl power and brilliant advice they could! Here are some of the highlights!

Jenna Elfman took a couple of moments to talk about how life-changing her role on Fear the Walking Dead has been:

“Being 47 and being on Fear, to have this role at this age – to reinvent myself and really dig in and tell this story as a woman – not a girl – is wonderful. I’ve lived a lot of life and have had a lot of experiences, but having the opportunity to start fresh at this age in this world, and with such great actors, writers, artists, and crew granting it life….we are here because of you and your passion, so, thank you for welcoming us and engaging in these stories and letting us into your mind and your hearts.

I’ve learned that its okay not to be all things to all people. There are all of these different ways to express yourself as a creative person and you don’t have to be the one who does all of it. If you So, as I’ve gotten older I’ve learned to give myself permission to pass on things that other people say are amazing, but aren’t for me, and I hope that you guys find a way to do that for yourselves.

The ladies also revealed which Walking Dead character they would like to play:

“I want to be Shane. I’m tired of them fighting over me, I’m fighting.” – Sarah Wayne Callies

“If we are doing the man thing, I want to be Rick. I mean why, not? Rick from season 1 – I want a long journey. Or Michonne. Rick is my guy, Miconne is my woman.” -Melissa Hutchinson

“I’m going to go with Sasha. That Sonequa Martin-Green is really talented and I just think Sasha was a sleeper character the entire time and you didn’t see her coming.” -Yvette Nicole Brown

“Hershel. I love that character, he made me feel good- like everything was going to be okay.” -Jenna Elfman

“I think I’d like to be Glenn. He was really fun and that scene he did with Maggie (when he thought she’d be raped), the complexity of that scene was really special.” –

At FanFest we love to hear what shows people are loving and the ladies were more than happy to give some new TV suggestions:

“Killing Eve…I’ve never enjoyed murder quite so much.” -Pollyanna McIntosh

“Better Call Saul has been my go-to but also Poldark.” -Melissa Hutchison

“I love the silly things. I love the Unbreakable Kimmy Schmidt. So, if you want to laugh at some silly stuff, it’s a great show.” -Yvette Nicole Brown

Has anybody seen Big Mouth? It is so fucked up, it is amazing.

Melissa Hutchison took some time to reflect on what it’s like voicing a character who is aging:

That is one of the things I love most about the world of voiceover – you can be whoever you want. I am boys. I am girls I am old women and old men. It’s kind of crazy. Aging with Clem has been spectacular, especially in the walking dead universe. She started as this 8-year-old, who lost and is rescued by this man and she’s so small and innocent and then we move and now she’s a teenager. So, the process of that has been amazing because gotten to shift from this small child who needs protecting to this badass non-sexualized amazing strong young woman.

Sarah Wayne Callies also took a stroll down memory lane back to her favorite memory from season 1 of The Walking Dead:

Andy Rothenberg who played Jim was one of the funniest people ever. We were in the middle of one of those giant scenes with like 6 cameras running around. We were watching Andrea put her sister down and at the end of one take Jon Bernthal explodes. I guess in the middle of the take Andy had turned to him and gone ‘I love you.’ That made him my favorite person on set that day. It was super funny and I love him for it.

Lastly, the ladies were happy to give some advice to their twenty-year-old selves:

“Nobody cares as much as you think they do. They’re just worried about themselves and their stuff. Doing what you need to do and doing the right thing for yourself is doing a service for everyone as well” -Pollyanna McIntosh

“I would tell myself to make choices that keep you on your own truth and don’t make decisions based on pleasing people.” -Jenna Elfman

“I would learn a hell of lot more about money and investing. I would sit myself down and take a class and get smart about this. Making money dosn’t matter if you don’t keeep it.” Sarah Wayne Callies

More fun from the panel to come…stay tuned! And be sure to check back to Fan Fest throughout the weekend for all of your Walker Stalker Atlanta coverage including behind the scenes content, interviews, and panel news!