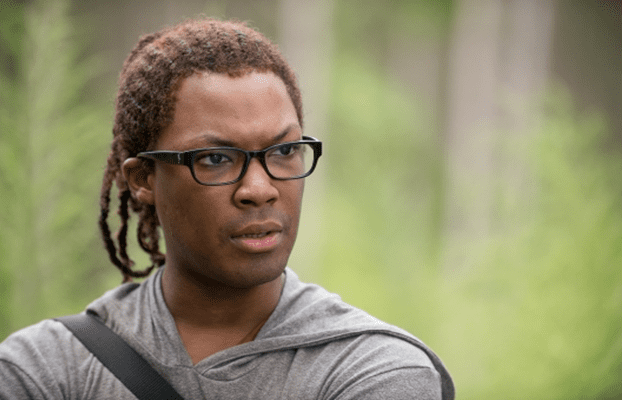 No one has forgotten about Heath! We last saw Health fending off a bunch of walkers as Tara floated over to Oceanside. All that was left of him was a small card that read PPP and some tire tracks…

The Walking Dead creator and executive producer Robert Kirkman has updated us about Heath (Corey Hawkins) after his abrupt disappearance in season 7.

“Corey Hawkins, who played Heath, very great actor, got busy on a lot of things, [had] different things happening, this is what happens in the world,” Kirkman answered when asked about Heath’s disappearance during a Q&A panel at San Diego Comic-Con.

“And so I wouldn’t want to spoil things like it’s entirely possible that he could be coming back at some point, but we’ll see. We have not forgotten Heath. And everyone will remember that character when he comes back,” added Kirkman.

“We definitely have not seen the last of Heath, period,” said executive producer and former showrunner Scott Gimple. “I will say that. I don’t mean to disappoint the Heathies. He will be on the show. He will be within The Walking Dead again.”

Executive producer and director Greg Nicotero chimed in saying “I love Corey. I think he’s a fantastic actor. I think we were lucky enough to grab him right at the moment where he sort of exploded onto the scene, so to speak…We can always hope that he can pop up every once in a while, or we leave it a little mysterious. We haven’t really addressed much of that as of late.”

Season 9, under new showrunner Angela Kang, promised a year-long time jump, and hopefully, Heath’s disappearance and the “PPP” mystery will be addressed.