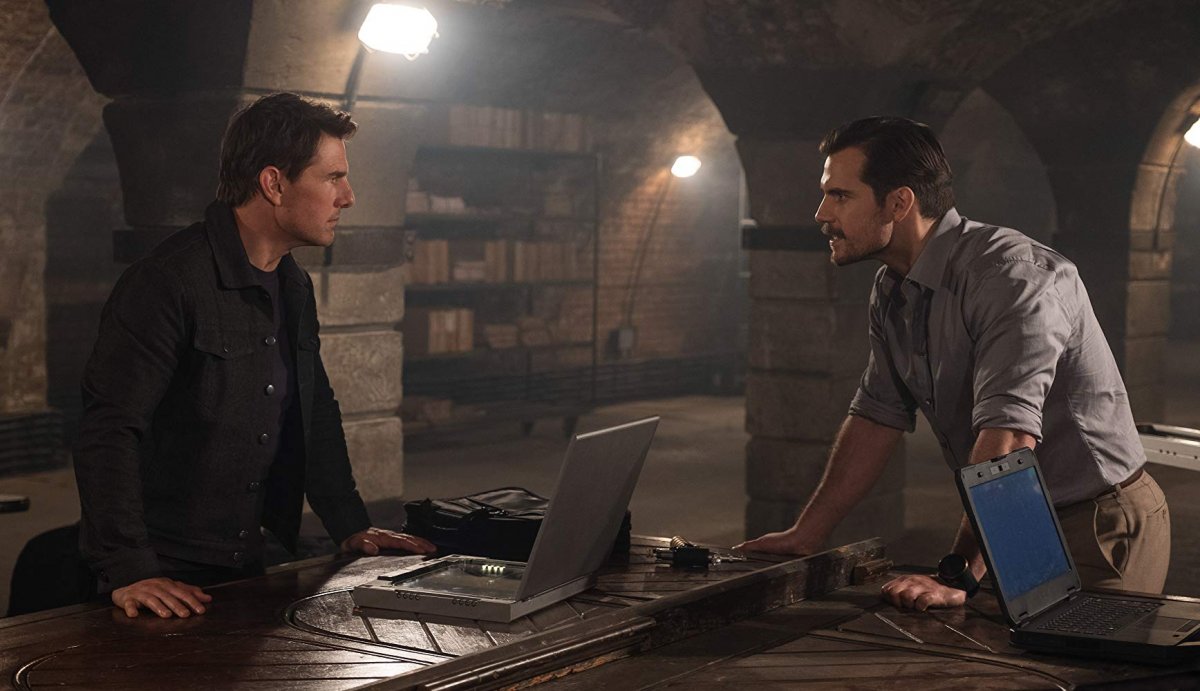 Written and Directed by Christopher McQuarrie

Every franchise reaches that point where, creatively, the powers driving these films know when the final chapter has been written. One can close the book on the franchise and call it a day, kick up their feet and sip coffee and just take a moment to breathe. Harry Potter could have continued onward past J.K. Rowling’s novels but stood pat. James Bond only continues forth because of the enduring nature of the character and the producers’ drive to continue onward with new installments. (Next November’s entry will be the unprecedented 25th entry in the series, marking the end of Craig’s tenure.) But the story of Mission: Impossible and central character Ethan Hunt sure has had some twists. The 1996 original was a conventional spy thriller, whilst the 2000 sequel was a heavily-edited by-the-numbers John Woo stunt fest that invoked many yawns. Ever since J.J. Abrams and Bad Robot leaped aboard the franchise has become a different beast, increasing the stakes and weaving a narrative with the right casts and crews.

You can thank Abrams, Brad Bird, or Christopher McQuarrie. Each has left their own stamp on the Tom Cruise-led adventuring one way or another. Sure, Tom Cruise isn’t the most likable action star. (Blame it on the Scientology or his acting, pick your poison, but I dig his work as an action hero.) But Cruise has made this franchise into a wholly different beast, veering away from convention spy tropes to conceive white-knuckle stunt-packed thrillers that transport audiences into tales of fascination and wonderment. With each new entry the stakes get higher, the characters are run through a untenable gamut off never ending chases, and somehow the IMF still saves the day. The latest entry, Mission: Impossible – Fallout, marks the sixth entry of the franchise yet continues a plot that began way back in 2006’s Mission: Impossible III. Much like Daniel Craig’s first four outings as James Bond – all four narratives standing individually, yet all tying in together by the quadrilogy’s end – the last four Mission: Impossible entries are all connected too.

Rather than trying to avoid the end of the road ahead without any resolutions, writer/director Christopher McQuarrie has created a film that feels more like old-school spy theatrics than its other brethren. Mission Impossible: Fallout is fueled by spine-chilling stunts in a rousing exploit that criss-crosses the world and ties together plots that have simmered for years, finally reaching gratifying conclusions. While the overall story has been recycled in this franchise a couple of times before at least the characters are flat-out captivating, the jaw-dropping and finely-crafted stunt work delivering an actioneer that not only makes Fallout the best in the franchise but arguably setting the bar for forthcoming blockbusters in the action genre.

For starters, if there’s one aspect that limits the greatness of Fallout, the fact that the same basic plot is salvaged once again is absolutely frustrating. I would think six films into the franchise, we would be able to veer away from the same general story. I’m not opposed to more of Sean Harris’ gleefully diabolical Solomon Lane, as his former British intelligence agent makes for a excellent ying to Ethan Hunt’s yang, the anarchistic nature of Lane always looking to tip the scales in a world diseased by its denizens. No, what frustrates me is the necessity of a rogue agent. In four of six films the villain has turned out to be a mole, a wretch hiding in plain sight that the viewer can point out instantaneously. Paramount really didn’t help the marketing by giving away just who Hunt’s foe is this time around either, but McQuarrie approaches the repeated narrative by twisting around what you see versus what you know. McQuarrie’s penchant for surprising audiences works marvelously to take an overplayed plot device and try to keep the crowd speculating what will happen next. We know the rogue agent’s identity and Solomon Lane’s endgame. How McQuarrie directs us to the finale is the saving grace for a film I’ve seen way too many times before.

Mission: Impossible – Fallout calls back to the earlier roots of the franchise at its core, yet still balances the mania that Abrams has infused within the the newer films’ fiber. The IMF still relies heavily on the latest technology in order to collect intelligence and gather data during their missions, only using violence as a means to an end. Yes, the running gag about “dressing up like Halloween” still rings true, though the team relies more on passé trinkets to get the job done. Planting a tracker and tailing a nemesis to discover their whereabouts? Hacking into various systems to follow bread crumbs towards the truth? Even using a sound stage to coax a baddie into thinking he’s won? Those are the theatrics of yesteryear, all devices we’ve seen in the spy films of the past, and to see their return is a nice about-face for a franchise once focused on future mechanics. Also, to close the loop and tie into the 1996 original, is a character by the name of the White Widow, the leader of a London criminal syndicate whose mother Max was a mover and shaker in the 1990’s. Now, if your memory recalls, Max (Vanessa Redgrave) was the broker than Ethan Hunt dealt with in 1996’s Mission: Impossible. What’s old is new all over again, the White Widow taking over for her now-deceased mother, a fresh nubile face up to the same old schemes and affections for dashing IMF agents.

Fallout stands out among a very crowded genre by relying on practical special effects, ensuring that CG enhancements don’t become a crutch in order to let the story unfold. Here’s a bit of trivia for you to look at Fallout in hindsight. Fallout contains a dazzling three thousand individual set-up shots, a total of thirteen helicopters utilized, five different hiatuses due to on-set accidents, four total weeks of aerial photography to set up the dazzling denouement, shot across three different continents and through two winters (2016 and 2017), and a suffered broken ankle by Tom Cruise on a stunt gone wrong. Cruise broke his ankle leaping onto a building in London causing a long delay in filming, hence why Fallout saw winter not once but twice. The 161-day shoot also didn’t have a completed cut until July 8th – of this year. That’s only three weeks ago. Moreover, creating a blockbuster of this magnitude without requiring an overuse of CG enhancement goes a long way to drawing in the viewer and creating a sense of realism. You feel squarely placed into of the action at all times, not as an observer watching the suspense unfold, your eyes able to tell the stars are the ones doing the stunts with cameras planted all around them.

Though Cruise’s Hunt is the star of the film (and is absolutely fantastic as always), I would dare say that he’s overshadowed by his supporting cast. I’ll never say no to having Ving Rhames spice up any movie he’s featured in, coming full circle as his Luther Stickell continues to side with his friend of twenty-plus years, still working for IMF in the field without breaking a sweat. Rebecca Ferguson, returning as MI-6 Ilsa Faust, serves more as the driving force to Hunt’s more romantic instincts. His first thought is ensuring that Faust is far away from the danger without becoming just another notch on a wall long to be forgotten. The development of their fireworks, first insinuated in Rogue Nation and furthered in Fallout, eases a nice breather into a film that relentlessly thrusts its characters without much of a break. On the other hand we also see the long-awaited return of Michelle Monaghan as Julie, Ethan’s bride from M:I III, finally closing the book on the fallout of their marriage. I’ll admit, I’m glad that the elephant in the room was finally acknowledged – after all, their marriage was a major plot point in the past. Characters in a franchise of this scope shouldn’t just disappear. (Unless you’re Jeremy Renner. Just like Avengers: Infinity War, I want to know where the hell he wandered off to damnit.)

Really though, aside from Simon Pegg’s Benji Dunn finally coming full circle in maturation to his character, Henry Cavill steals the movie away from the entire supporting cast. Cavill has been grossly misused to roles past. He was the bright spot of 2015’s The Man From U.N.C.L.E. as Solo, a dapper American agent who lived on the cool side of the pillow, unwavering in his dedication to country and preservation of peace. He didn’t panic, he didn’t break a sweat, and he was more a man of stealth than blunt force. However, Cavill’s August Walker is tonally and morally different from Solo. Walker is Solo hopped up on steroids, a bulky behemoth and flat-out monster who’s a paid lap dog. Walker is just an assassin on a leash and, at the snap of a finger, will do whatever necessary to close the case. While we learn early the driving force behind Walker – thanks Paramount for that reveal in the marketing by the way – Cavill really chews the scenery as much as he can, his steely gaze and desire to inflict pain a blast to watch onscreen. Cavill’s been the good guy too often, so to see a darker side demonstrates the kind of action star the Brit is destined to become. As dirty a player in the spy game Walker is, Cavill’s ability to steal the spotlight from Cruise himself is commendable.

Cruise is on record for saying that he’s down for more of this franchise but Fallout could serve as the closing chapter of a very long novel. Christopher McQuarrie, in the midst of a renaissance of his career, will move on to other projects of his choosing for sure. (If he could only sink his teeth into a Bond film, with Cavill becoming Double-oh Seven himself, then I would truly be elated.) For now Mission: Impossible – Fallout serves as a wildly rousing and successful conclusion that feels more like a 1960’s spy thriller than modern-day action blockbuster, wrapping up four films’ worth of stories that get their proper resolution. The Mission: Impossible franchise has evolved into a story of a solitary man driven by his commitments to duty, for preservation of those he loves, and for getting the job done. Not just the stunts, but an actual story. And if there’s a seventh film somewhere to be told, I hope Cruise rounds up the gang and serves up another memorable adventure for us all.