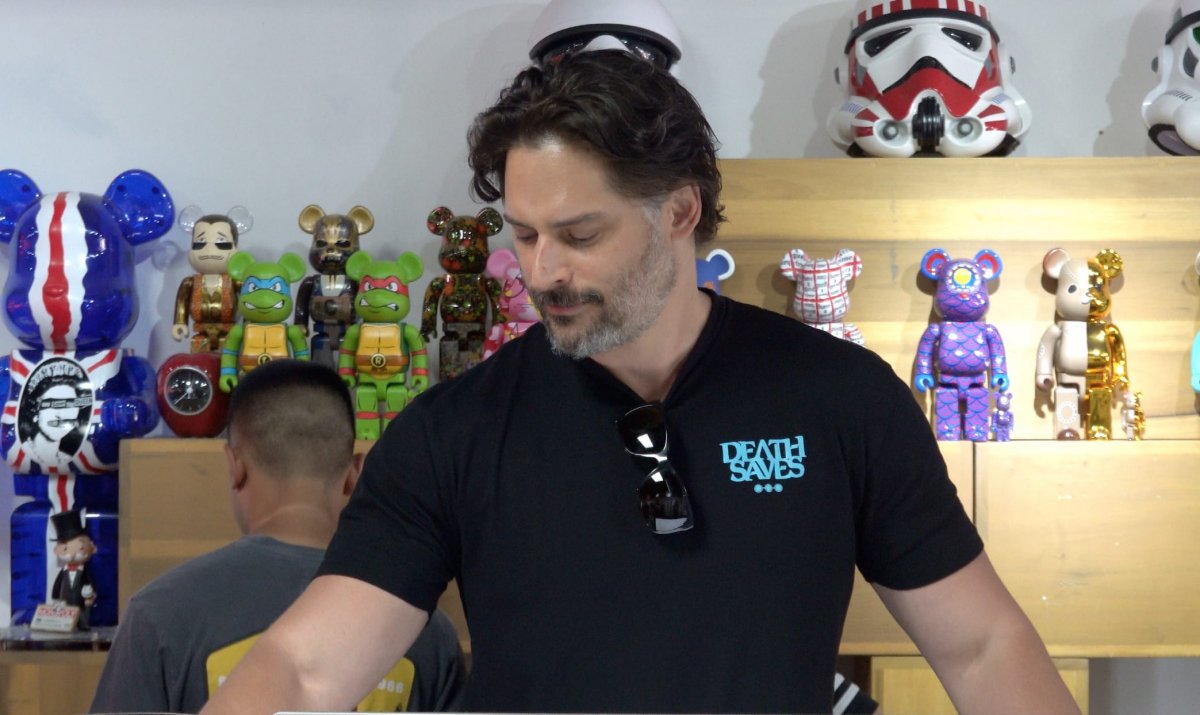 I remember how old I was when I first started playing Dungeons & Dragons. It was an incredible game that taught me everything I know about storytelling and flexing my imagination. A lot of folks are either fans of the game, or they’re not…but, the truth is a lot of folks (up until Stranger Things) only viewed it as a ‘nerdy’ or ‘evil’ game which deterred them from it. While the game is high fantasy and is more fun when you use your imagination, it is still appealing to the masses and always has been if you approach it with an open mind.

But, now…actor Joe Manganiello is working his magic by creating a badass streetwear company called Death Saves that highlights the epic D&D he grew to know and love. Joe has always been a massive fan of Dungeons & Dragons and that shines bright with the company name Death Saves.  The designs are epic, beautiful and the quality of the garments are top notch. While D&D merchandise has always been available, up until the release of Stranger Things, it was a bit complicated to find shirts with unique designs catered to both the fashion forward folks AND the D&D die hards. But, Joe has created a brand that does both…and, as a D&D fan I couldn’t be more excited about this.

While the Death Saves Instagram launched a little while ago, fans were dying to get their hands on these dope threads as soon as possible; so, it would only seem fitting for the official launch to be at BAIT over San Diego Comic Con with Joe working the register selling the shirts from 1-3pm. I had the incredible opportunity to be on-site covering the event as it unfolded and I can say that the excitement from Joe was raw and real. He was giddy at the fact that folks were lined up to support a brand that meant so much to him, and he was ecstatic to share his love for D&D with so many fans who turned up to rep Death Saves. Watching Joe quickly learn how to use the register before the hoards of people were let in was incredibly endearing and such a cool thing to witness, especially seeing that he just wanted to make heaps of people as happy as he was.

Once the doors opened, only a few people were let in at a time to insure that each fan had an intimate experience at the launch. It was beautifully ran and never felt chaotic…which was a nice break from the craziness of SDCC. All in all, the launch went extremely well as all the fans seemed to have left as happy, if not happier than Joe. The day after the launch at BAIT, the official site launched for folks to purchase Death Saves swag from shirts to jackets to phone cases to artwork. The promise of constant updates to the store and merchandise lineup is present on the site, and as a fan I can’t wait to see all of the spectacular designs that will release in the future. Now, excuse me while I go buy everything available.

You can head over to http://death-saves.com right now to stock up on some epic D&D streetwear at an extremely affordable price!

Here’s a little video recap from the event itself: