With Jurassic World: Fallen Kingdom coming out this weekend, Jonny decided to pay tribute to one of his favorite film themes. He presents, the theme from Jurassic Park. 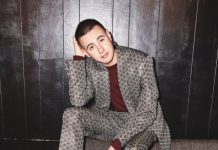