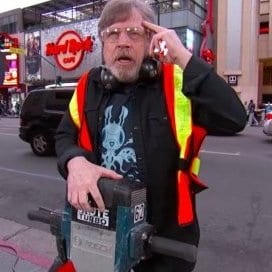 The Star Wars franchise has some of the best duels in film history. From Obi-Wan and Anakin Skywalker to his son, Luke Skywalker and Darth Vader, anyone from this galaxy to the next knows better than to mess with a Jedi Master…Well, not Jimmy Kimmel.

On last night’s Jimmy Kimmel Live, the host announced to his audience, that Mark Hamill, Luke Skywalker himself, would be honored with a star on Hollywood’s iconic Walk of Fame. He began to tell his audience that Hamill’s star would be located right in front of the studio where Kimmel’s show is taped and that he wanted to congratulate the actor who was waiting outside.

They cut to Hamill outside, jackhammering the cement sidewalk but unbeknownst to Jimmy, the spot that Hamill is preparing for his ceremony is Kimmel’s own star on the Walk of Fame.

Jimmy yells at him, “Wait a minute…that’s my star you’re jacking up!”

Hamill responded with, “Yeah, not anymore…Why don’t you put your star in front of Hooters?”

After failing to influence Kimmel using a Jedi mind trick to make him believe that it was not his star, Kimmel reminds Hamill that it only “works in the movies.”

Hamill then asks, “What movie?”

To which Hamill responds, “Exactly! This IS a star war and guess what,  Jimmy…I’m WINNING!”

Watch the full clip below:

Mark Hamill will be honored with his star on Hollywood’s Walk of Fame on March 8, 2018, at 11:30 am PST. For coverage, fans can watch ceremony HERE or go to www.walkoffame.com

MAY THE FORCE BE WITH YOU…