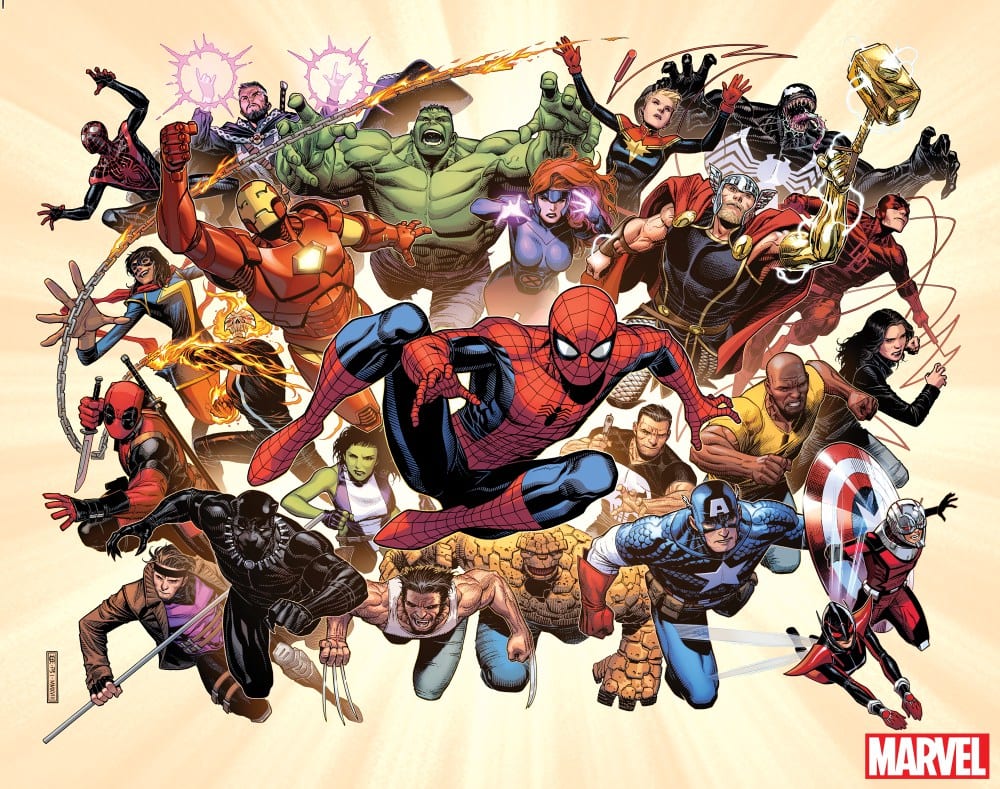 I love reading comics. It’s honestly one of my favorite things to do. I spent a large part of the last weekend binge reading a number of different series I had fallen behind in. While I try to stay on top of my reading, I’m always on top of the must-reads, there are some books that kind of just fall through the cracks a little bit. But who doesn’t like a good binge, whether it’s with a television show or a stack of comics? Some of my favorite books started with a good binge read session. Ms. Marvel, Paper Girls, Y the Last Man, Miles Morales Ultimate Spider-Man, and Saga are all books I fell in love with during massive binges.

Comics, in a lot of ways, make the world go round for yours truly.

I’ve made no effort to hide the fact that I’m a Marvel kid through and through, and while I feel that DC has been currently been putting out more of the must-reads (Batman, Mister Miracle, Dark Nights Metal), it doesn’t deter me from reading my Marvel titles. That’s never going to stop even though I have been less than pleased with the state of the Marvel Universe as of late. It started back with Civil War II which I thought was a bust that tried to cash in on the Captain America Civil War hype and it kind of came to a head with Secret Empire, a series that started off so masterfully only to end on an uninspired, lazy, lame note. At that point my frustration levels with the company were high. Throw in the fact that a number of the books are super overpriced and their promise of no event books for 18 months only lasted like six, I had gotten to the point where I felt Marvel was testing me.

See, the problem with Marvel comics has been this constant need to reinvent itself or start fresh. After every massive event series has comes a “new era” in Marvel all with catchy titles. In the last few years alone we’ve had two Marvel Now!, All-New All-Different Marvel, Avengers Now!, All-New Marvel Now!, and most recently Marvel Legacy which saw books returning to their original numbering and bringing a call back to some of the core characters of the company. Because, if you remember, Marvel had that whole thing about diversity last year.

Keeping track of the constant relaunches, reboots, and changes within Marvel can be daunting and exhausting. At some point, you just want to scream, “leave everything alone”, which is why today’s announcement about another new relaunch starting later this year was kind of met with a collective groan from me. Again with this? What happened to Legacy which seems to have just started? I’ll tell you what happened, the dramatic shift to original numbering threw off a ton of readers along with retailers and just didn’t make sense in the long run. It was kind of annoying going from issue #14 of a series to issue #534 in the span of a month. It was just more of the same for Marvel. Legacy reeked of a new opportunity to slap a new label on books, hike up some prices, and keep things more of the same.

As I rolled my eyes at yet another Marvel relaunch, not a reboot, I started to read a bit more of what should be expected and it looks like this new direction is all about shaking up the current state of Marvel. New writers. New books. New teams. The works. Almost like a facelift. As I was reading I couldn’t help but become a bit more interested in this new direction. It seems like the entire initiative is being led by a brand new Avengers book written by Jason Aaron. That alone was enough to make me change my tune a little bit. Aaron has beeing writing stellar comics for Marvel for quite some time. If you don’t believe me read his epic Thor run or his Star Wars books. With the departure of Brian Michael Bendis, it seems that Aaron is becoming the new face of Marvel and I have zero problems with that. His new Avengers book will bring the core three (Captain America, Iron Man, and Thor) together for the first time in a looooonnnngggg time. They’ll be surrounded by Black Panther, Captain Marvel, She-Hulk, Ghost Rider, and occasionally Doctor Strange. That’s a pretty stellar team right there. To make things even better… this will be the only Avengers book out there. There will no longer be eight different Avengers titles. The Marvel Universe will run through Aaron’s new book as it becomes the flagship of the company. Marvel released a teaser image that seemed to display the direction of this new relaunch, and it raised equal amounts of excitement and concern from yours truly.

Let’s start with the good. First of all, I love that Spider-Man is right there in the forefront. If there was ever a character that represented Marvel Comics it was him, and with Dan Slott finally leaving Amazing Spider-Man I’m thinking the importance of Spidey could be about to skyrocket. I’m super curious to see who is going to write that book. I’m ready for a new voice there for sure.

Other things to be pumped about, both Miles Morales and Ms. Marvel are featured and that’s a sigh of relief for me as they’re two of my favorite Marvel characters. It also shows that the company won’t be moving completely away from some of their newer, younger characters. We got three out of the four Defenders in action (where’s Iron Fist?) as I expect big things from Luke Cage and Jessica Jones going forward. The Punisher is lurking somewhere in the middle there and it seems like it’s been awhile since he’s been a major part of the Marvel Universe. Thor now has a gold hammer and a gold arm which raises some questions. And the newly resurrected Wolverine looks ready to rock.

All of that is good and exciting but this image also raised some red flags for me too. For starters where is Riri Williams? With Tony Stark coming back to take the Iron Man mantle does that mean Riri is about to fall into obscurity? That’ll piss me off. Legacy also teased a come back for the Fantastic Four but here we only see the Thing. He’s got a new book with the Human Torch, that’s only a few issues deep, but Torch is surprisingly missing here. There is zero trace of the Guardians of the Galaxy. Not a Groot, not a Star Lord, not a Rocket to be seen. What’s going to happen to them after the big Infinity Stones event? You know who else is missing? Jane Foster. Does this mean she’ll finally succumb to her illness as this new era begins or is she just being phased out too? While there are some exciting aspects to this image these questions worry me quite a bit.

Then there’s the off chance that I’m reading entirely too much into this image. That could be the case but Marvel has been known to release teaser images involving the characters getting the big push which is where all this is coming from. I’m just a fan who wants to know what’s going to happen to his favorite characters. I think that’s totally reasonable. Plus this is the internet and overreacting comes with the territory.

Outside of the new Avengers book, and a newly announced Venom title (Venom who is also in the image… just saying) we don’t know much about this new Marvel relaunch. All we know is that there is a change coming… again. Here’s hoping that this time, with a new editor leading the way, that this change leads to something a little more permanent. I’m all for tighter storytelling, more diverse books, character celebration, and a more steady/stable direction in the comic company I love the most. Just look what DC has been able to do with the whole Rebirth movement. With the MCU dominating everything it touches I think the comics are in need of a win. Here’s hoping this relaunch ushers in that victory. If not, I’m sure we’ll be talking about a new relaunch this time next year.