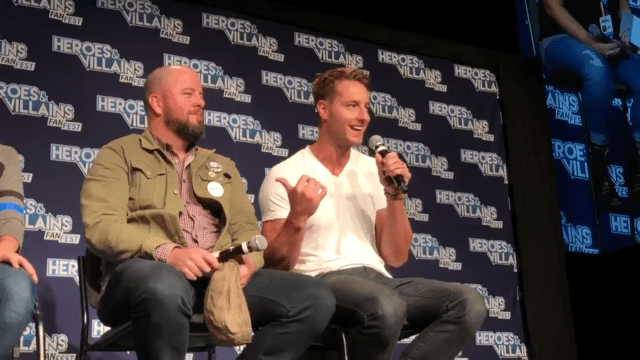 This Is Us stars Justin Hartley and Chris Sullivan took the stage Sunday at Heroes & Villains Fan Fest San Jose.

They talked about everything from the amazing writers of the show to the scenes that make them cry. Justin began to tell fans that Chris is very funny on set and actually tries to get the words “This is Us.” into every episode. Watch the two tell the hilarious story!

“@SullivanTweet, in every episode, tries to get ‘this is us’ in the episode” @justinhartley laughs #HVFF San Jose pic.twitter.com/AjiqMQ0yWW

The discussion also got serious when the two told fans that they believe the topics they cover are actually very important. Justin explained the importance of exploring the downward spiral Kevin went through this season.

I don’t know anybody who doesn’t know someone who has gone through something like that. It’s not just that person it’s the people around them and it’s a real thing. So I wanted to make sure we did that storyline justice.

“That’s part of the responsibility of any role you play” @justinhartley talks about how seriously he’s taking his character’s storyline this season #HVFF San Jose pic.twitter.com/ZeJUCaA71D

Wonder why you always find yourself in tears during the show? Maybe it’s good to dive into the hard emotions.

Chris says the hardest situations are important to explore and the most common. He also says that the best relationships are formed and how sharing pain and suffering with one another is a catharsis. “No solid relationships are based on Carnival cruise ships.” He jokes.

Justin Hartley said there isn’t an episode that doesn’t make him cry and spoke highly of the writers of the show as well, and says that when the writers hand over the scripts to the amazing actors, it’s a perfect marriage that works.

We think so too!