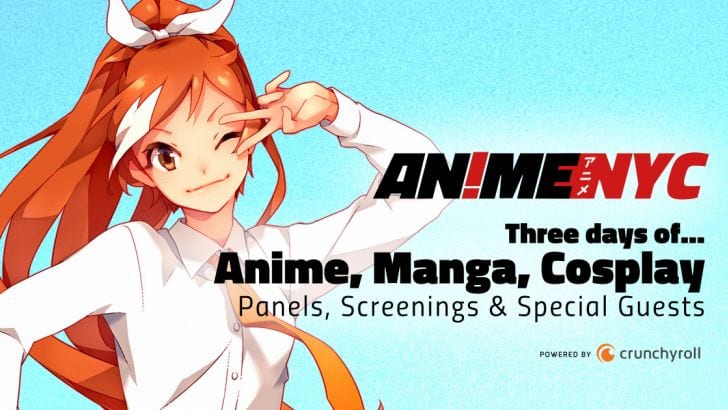 Last weekend Japanese culture and creativity took over the Jacobs Javits Center as AnimeNYC burst onto the Big Apple scene. Left Field Media pulled out all the stops for their inaugural anime event. Premiere film screening, masquerade parties, video games, concerts, panels, artistry, collectibles, cuisine and so much more made for a weekend filled with fandom fun! Although this was my very first experience in the manga/anime realm, it was hard not to get wrapped up in all the excitement that surrounded me. Thankfully I was joined by media pro, Brian J. Cano who is a bit more well versed than I when it came to recognizing the colorful sights across the con floor. It is with great pleasure that I am able to share our AnimeNYC experience right here at Fan Fest News.

Our journey began early on day 2 of AnimeNYC. Having recently attended New York Comic Con (NYCC) only a few weeks prior, the Javits center is starting to feel like home. Unlike NYCC though, AnimeNYC functioned on a slightly smaller scale which provided for a much more intimate setting. It did not take long to familiarize myself with the locations of specific events and panels and it was delightful being able to move about with relative ease. A bit more signage might have been helpful but I actually didn’t mind ‘finding my way’; it helped me to discover areas I may have ordinarily overlooked.

Considering that more than 20,000 people attended the weekend’s festivities, the lines for entry were well managed. In fact, the lines for all the events were well managed. Anyone that has attended a comic convention knows… there will be lines. Lines often time create chaos and frustration with fans, staff, and volunteers if not managed properly. AnimeNYC clearly knew the formula for crowd control and were able to direct fans with ease. Kudos to all the volunteers that helped keep a smile on everyone’s face!

After navigating our way through the entry, the big question was what to do first? Anyone that knows me is well aware of my adoration for amazing artwork, so there was no doubt that our first stop had to be in Artist Alley. Located just above the main floor, an amazing array of artistry was laid out before our eyes. While most pieces featured the hottest characters in anime, there were also bits of mainstream fandoms (Marvel & DC) as well as indie works. My eyes were wide as I took in all the various styles of creativity; a plethora of options available to hit your heart… and your wallet! 😉 Soon realizing we had spent most of the morning meandering Artist Alley, we decided it was time to make our way to onto the Main Floor.

My immediate reaction upon entering the Main Floor was one of familiarity. I gazed around the room and saw toys, comics, cosplayers, collectibles, games, food… everything I would normally expect from any comic convention. Yet, upon closer exploration, it was all so very unique. Colorful figurines featuring the hottest characters in anime were on display as far the eye could see while cosplayers wandered about in their cleverly designed costumes representing their manga idols.

As expected, Japanese influence was everywhere; jewelry, weaponry, music, and food. Sadly we were unable to attend the Ramen Sumit; it would have been fascinating to hear the cultural significance of Ramen and it’s devoted following. I have fond memories of my Ramen days.

Strolling across the convention floor eventually brought us to a gaming area. While gaming areas are pretty standard at comic cons, it was cool to see a large variety of physically interactive options. Fans patiently waited in line for their chance jump around, bang drums, and flip tables all for the chance to score big. Was there a winner? From the joyful expression on people’s faces, I say they all won.

After hitting Artist Alley and the Main Floor, it was time check out our first panel. We made our way down to the Main Stage area where the Sailor Moon panel was already in progress. Neither Brian nor I were familiar with the Sailor Moon series and were pleasantly surprised at being drawn into this much-adored anime.

“The story centers around an air-headed crybaby, named Usagi, and her friends Ami, Rei, Makato, and Minako. They become Sailor Moon, Sailor Mercury, Sailor Mars, Sailor Jupiter, and Sailor Venus respectfully. They fight for love and justice against the evil minions of The Dark Kingdom.” Source: IMDb

The seats were full and the air was energized as the entire cast received thunderous applause upon entering the stage. Passion for the Sailor Moon series was apparent as the cast members lovingly and often humorously shared stories about portraying their characters.

Not only were audience members given a chance to ask questions during the panel, they were also given opportunities to win prizes based on their knowledge of Sailor Moon. It is always fun to see fan interactions; creating sweet memories that will last a lifetime.

The pièce de résistance of our weekend though had to be the US premiere screening of the beloved Full Metal Alchemist (FMA). FMA is a manga written by Hiromu Arakawa, published between 2001 and 2010. This year, famed director Fumihiko Sori, best known for his special effects work on Titanic, brought a live action version to the big screen. Check out Fan Fest News for our exclusive interview with Mr. Sori as well as a thought-provoking review of the movie, Full Metal Alchemist.

“Fandom is best when shared with friends, old and new. I was able to share my passion for Full Metal Alchemist and by meeting others at the con, I learned about One Punch Man, different styles of art and even Ramen Noodles!” – Brian J. Cano

In closing, I would have to say that the weekend was an enormous success. Whether a hard-core anime fan or a newbie like myself, there is much to enjoy at AnimeNYC. It is no wonder that New York councilman Ben Kallos declared it Anime Weekend in New York City!

Thank you to all the staff, volunteers, media, management, guests and fans for opening my eyes to this delightful world! Thanks again to Brian J. Cano for teaming up to provide some great coverage. I look forward to seeing what AnimeNYC has in store for next year because I for one will be there. Anime has a new fan. 🙂