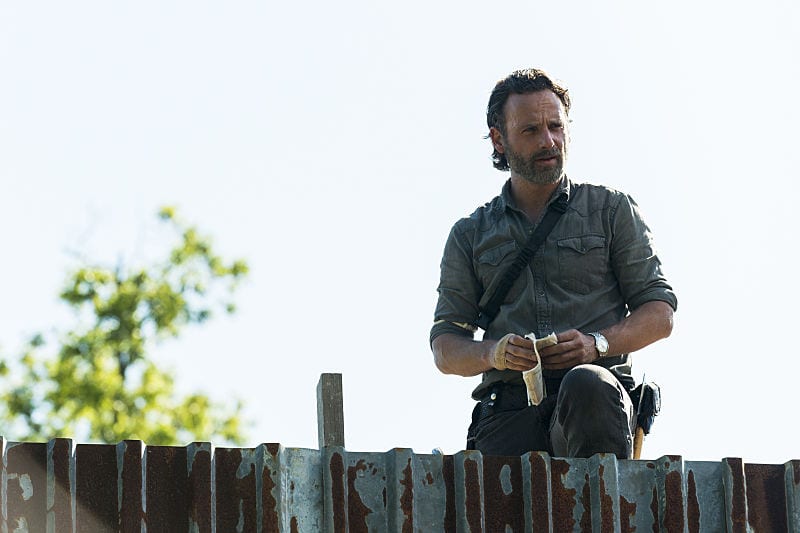 Who’s ready to go to war?! Happy season eight of The Walking Dead eve, Geeklings! How are you spending this newly christened holiday? Are you cramming in episodes with AMC’s marathon or maybe you’re re-reading your favorite issues of the comic? Or perhaps you’re enjoying a little bit of quiet before the storm hits tomorrow. Either way, there is no escaping the fact that tomorrow’s season premiere, the 100th episode of the series, is going to set up what is sure to be an exciting eighth season and I’ll be with you every step of the way to break this baby down.

If you recall from last year, I thought the second half of the Walking Dead was doing a lot of set-up work for this season here and maybe didn’t do a whole lot of story progression. A war between Rick and Company and Negan and his Saviors was something that was inevitable. It was hard to believe that Rick could be pushed any lower. Watching as Glenn and Abraham were brutally murdered in front of him powerless to stop. Watching as Negan safely returned a renegade Carl back from the Saviors compound like a triumphant uncle. Allowing the Saviors to take half of Alexandria’s resources. The kidnapping of Daryl. The burning of the mattresses. The neutering of Rick effin’ Grimes. You get the point. It’s hard-pressed to envision a season where Rick was more at his lowest, and he went briefly crazy answering ghost phones after his wife died, but Negan found a way to strip Rick of all his Rickness (sorry, I’ve been watching a lot of Rick and Morty).

Yet, here we are on the eve of season eight and Rick has found his swagger back. Some would say that his powers were restored after his ultra emotional bro hug with Daryl.

But the truth of the matter is Rick had reached a breaking point. Enough was enough. Throughout our seven seasons of watching The Walking Dead we’ve been promised a better tomorrow. A world built up to improve on the mistakes of the last, but all we see is more death and more chaos. A world that won’t allow itself to heal or move on. And yes, this new zombie-infested world is kill or be killed, but there has to be hope. Without it, what do we have? Rick understands this and by uniting the other communities (The Hilltop and the Kingdom) he is promising a future through war. Seems a bit of an oxymoron but in order to make an omelet you’ve got to break some eggs. I think that’s how that saying goes.

Which begs the questions, what is in store for this season? “All Out War” is one of my favorite arcs in Robert Kirkman’s comic series and puts me at a bit of an advantage when it comes to what to expect from season eight. I will try my hardest to not spoil or hint at things to come. If you read my reviews last year then you know I did pretty good with that. But it doesn’t mean I’m going to stay completely quiet. Hell, where’s the fun in that?

Here are some quick bullet point questions to be asking ourselves going into the premier tomorrow.

There you have it Geeklings. We are one sleep away from a new season of The Walking Dead! October doesn’t really feel like October until The Walking Dead comes back to our television screens. So, I’ve talked a lot, I’m going to turn it over to you guys. What do you expect from season eight? Are you Team Rick or Team Negan? What do you think of the Old Man Rick stuff? Are you ready to see Carol kick some ass? Sound off in the comments below. If you’d like to talk more Walking Dead with me then, by all means, contact me on Twitter @iamgeek32 and let’s chat. In the meantime, enjoy your marathon or comic readings and let’s get ready for an awesome season. Can’t wait to spend another season with you guys. Many huzzahs!