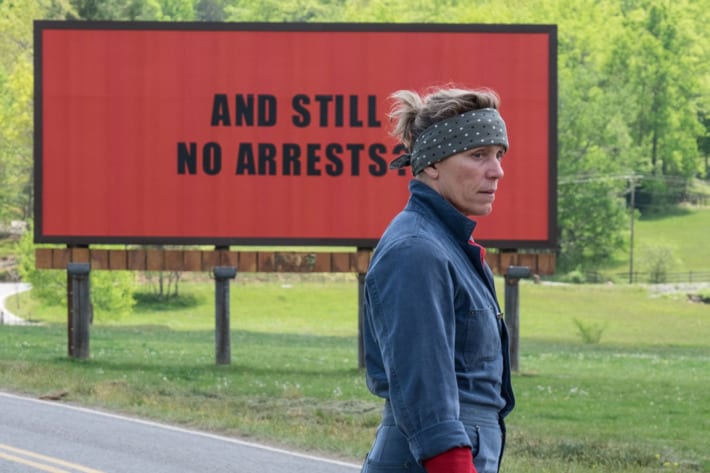 The cast of Three Billboards Outside Ebbing, Missouri received a warm welcome to the UK as Martin McDonagh’s dark-comedy had its international premiere last weekend, closing the 61st London Film Festival.

Oscar-winner Frances McDormand portrays hard as nails (and foul-mouthed) Mildred Hayes, a mourning mother on the hunt for justice for the unsolved murder of her daughter, seven months prior. Her attempts, including taunting police with messages on the town’s billboards, have left her in a bitter feud with Sherriff Bill Willoughby (Woody Harrelson) and officer Dixon (Sam Rockwell).

When I asked director Martin McDonagh on the red carpet whether he had a particular cast in mind when writing the script for the upcoming film, he said: “It was written for Frances (McDormand) and written for Sam (Rockwell). [And] I kinda wanted to work with Woody (Harrelson) again, and he hit it out of the park too.”

“It’s good to kinda have like a repertory company of people who you like and want to work with again and again.” He continued.

Check out my full filmed outtake with McDonagh below:

Despite having a short-lived role in the film, Katheryn Newton who plays Mildred’s murdered daughter Andrea said: “It’s a small role, but it means a lot and I wanted it to be the part of the movie that everyone could relate to and kinda ties it all together, and make people feel bad or feel that love and that loss.”

Having just won the People’s Choice Award at the Toronto International Film Festival last month, ‘Three Billboards Outside Ebbing, Missouri’ is already proving to be a success on a major scale due to its diverse cast and incredible narrative. Could the upcoming film be a contender at the Oscar’s next year? Very likely.

The film premieres November 10th (US) and January 12th (UK).