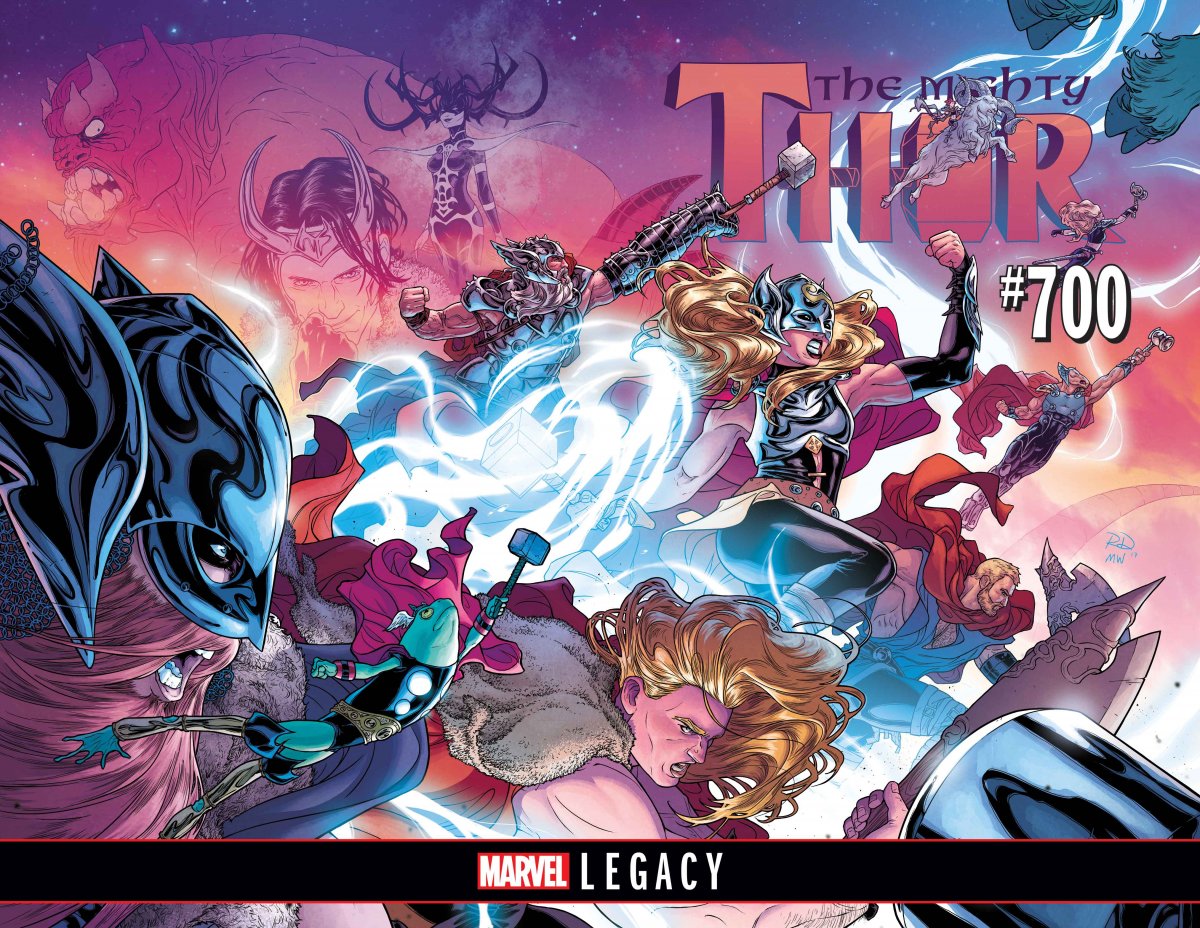 This week’s New Comic Book Day has got me feeling that 90’s hip-hop that is embedded in my soul. How so? I’m glad you asked. Have you ever listened to “Let Me Clear My Throat”? Of course, you have. I’m feeling that crowd participation aspect of 90’s hip-hop. You know, when the MC grabs the mic and is all like- When I say “comics’ you say “books”.

For those of you who participated I say thank you, and for those of you who didn’t, I know who you are and I’m sad. If you want to try again before we dive into this week’s books I’ll allow you to quickly rescan the moment above. Go ahead…feel better now? I certainly do.

Welcome, welcome, welcome to The Pull List everyone where anything can happen. Anything like your leader trying to live out some strange hip-hop fantasy through written word only. But you’ve been coming here long enough to know that stuff like that isn’t really out of the norm so to speak. What is in the norm (is that a saying?) is that it’s Wednesday and Wednesday means new comics. Which also means you’ve chosen to spend your time with me and find out what books you should be reading. Now someone drop a beat and let’s get this rolling. 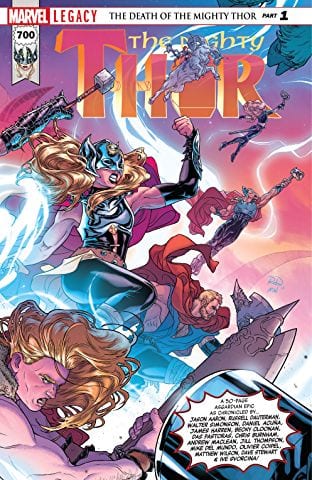 1. The Mighty Thor #700– Marvel’s new Legacy program has restored original numbering to classic titles which is why The Mighty Thor is celebrating its 700th issue. That is a pretty amazing feat, don’t you think? 700 issues of the God of Thunder bringing the ruckus. Issue 700 looks to celebrate Jason Aaron’s five years run writing about everyone’s favorite hammer wielder as well as prep it for the future. There are a lot of moving parts and one thing that’s certain is just how incredible of a job Aaron has done telling this story. Seriously, his run has been epic. This mega issue comes in at $5.99 (love that Marvel pricing) and contains a number of guest artists but most of all displays all the things that make Thor a super badass. Whether it’s Jane Foster, Odinson, or the War Thor, Aaron makes sure they all get moments to shine here as does everyone’s favorite MCU villain, Loki. The future of Thor comics is bright and I suspect issue 700 is a good jumping on point for new readers. You won’t want to miss out. 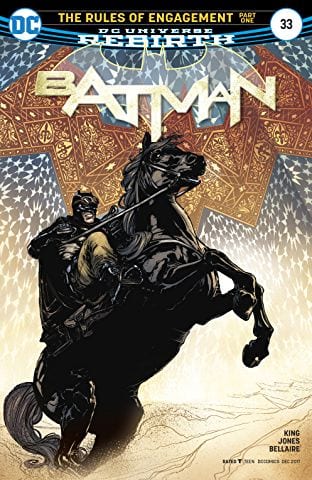 2. Batman #33– Awhile back Batman did some shiz when he asked Catwoman to be his wife. Seemed a bit risky but also made some sense considering their history. “The War of Jokes and Riddles” ended with her answer… SPOILER… she said yes. Now comes the tricky part, Bruce has got to tell the rest of the Batfamily that he’s getting hitched to on again/off again criminal Catwoman. I’m sure that will go over like a fart in church. Nightwing and Damian will have noooooo problem with that what so ever.  Tom King’s latest issue looks to take us past “The War of Jokes and Riddles” and into the next phase of his Batman run. One that is apparently going to involve wedding bells, but if there’s one thing about superhero weddings…. they never end up well. Hell, if MJ and Peter couldn’t make it work then what hope does Batman have? 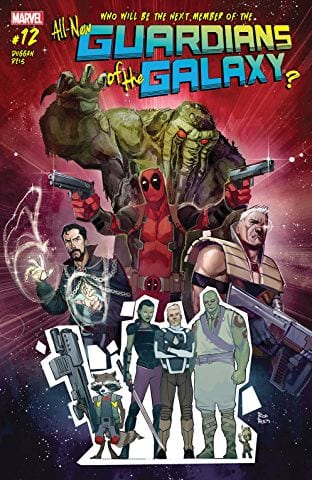 3. Guardians of the Galaxy #12– It looks like the Guardians of the Galaxy might be getting a new teammate. We’ve got ourselves a number of candidates too and the possibilities look like they could lead to some awesome team dynamics. Just think if Deadpool joined the group. What would life with Deadpool and Rocket be like? I bet Drax would be the first to snap. I don’t think that’s likely considering Deadpool has some work to do in The Defenders but we can dream. Cable would have my vote but I don’t think that’s going to happen either as he just mysteriously showed up at the end of a certain Spider-Man’s book. That leaves us with Dr. Strange (which I really want) or Man-Thing (who it will probably end up being). Either way, our core team is about to get shaken up and I wonder what it means going into their pursuit for the Infinity Stones. You know who has one of those things? That’s right, newly resurrected Wolverine. Looks like things are going to get real interesting for the Guardians in the upcoming months. 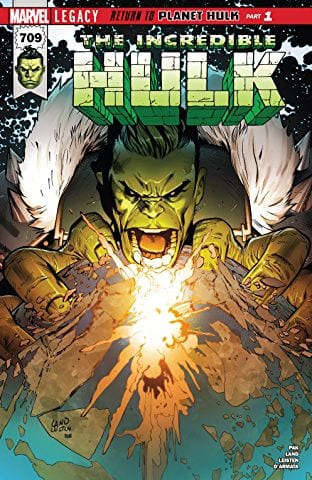 4. The Incredible Hulk #709– I have never been a really big lover of Hulk comics. I enjoy when he shows up in books like the Avengers but I’ve never loved the character enough to subscribe to his own series. I will say though that I fell in love with Greg Pak’s Planet Hulk series pretty hard. With Thor: Ragnarok right around the corner it makes sense that Marvel might want to return to Planet Hulk to remind the readers of the awesome. This time it won’t be Bruce Banner but Amadeus Cho who goes off in a space adventure. If you recall, Legacy had a part in it that involved the planet of Sakaar calling for help which might mean the planets is as destroyed as we believe it is. I’m curious to what Cho will find there but also apprehensive of how this will hold up compared to the original. The good news is that Pak is back (intended rhyming) to write this sort of sequel which is promising. The only sad part is it’s a five-issue arc. Was hoping for more. 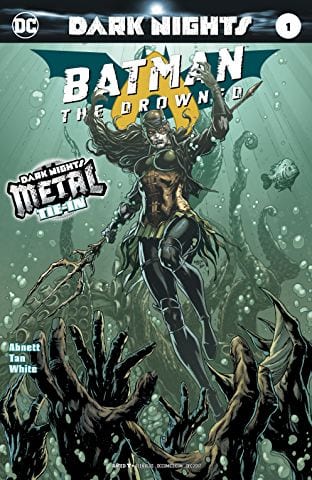 5. Batman The Drowned– One of the best aspects of DC’s Metal is that we get to experience a new evil Batman on an almost weekly basis. We’ve already covered evil Batmen with the powers of the Flash, Green Lantern, and Cyborg which means it’s time to take a deep dive (I’m killing these puns) into Aquaman… or woman? I think The Drowned is one of the creepier titles for an evil Batman and can’t wait to read this. With the next issue of Dark Nights Metal not coming until December something tells me we’re going to need these issues to hold us over. 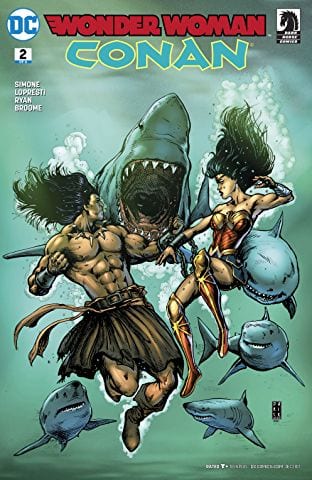 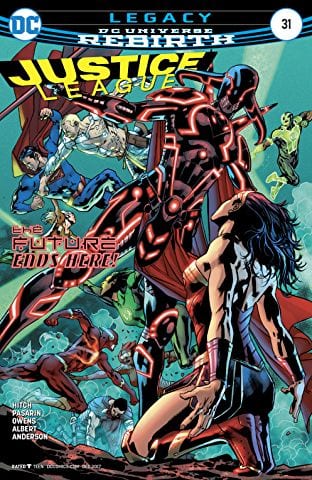 There you have it Geeklings, all the best books that I think you should be reading. Of course, if you feel like I’ve left anything off the list then, by all means, sound off in the comments below. If you’d like to continue talking comics or my awesome abilities as an MC, you can find me on Twitter @iamgeek32. One more thing before I let you guys go, if you’re feeling like you need more of my awesomeness then please click HERE for my new podcast, We Speak Geek, co-hosted with McKenzie Morrell. We’re really excited about the show and looking forward to getting episode two to your ear holes. If it’s geeky then we’re going to talk about it. Be sure to send us some feedback too. In the meantime, happy reading and many huzzahs!