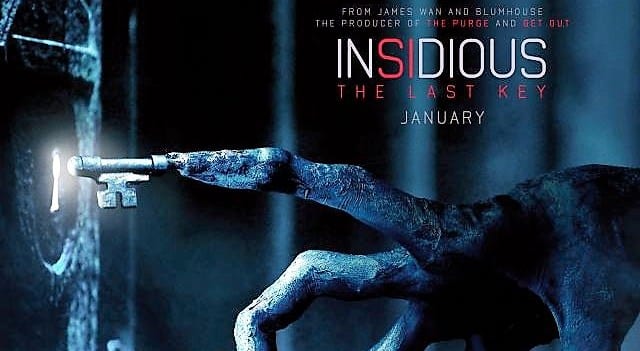 If you didn’t have Kleidiphobia before, you will as soon as you see the trailer for Insidious: The Last Key. Now, we have to be honest, when we heard the title for the film without seeing the trailer, we thought it may have been the ‘end’ to the series of films, but in fact – it’s set right after the events of the third film.

The ‘last key’ comes from that Kleidiphobia we mentioned earlier, yep – a fear of keys is a real thing and we can’t say that we’ve really ever been creeped out by them before but now…well…visions of keys being forced into our skin has given us chills.

In the film, Elise Rainier returns to Five Keys, New Mexico to help investigate a haunting and soon realizes that it’s taking place in her childhood home. The evil that lurks inside seems more powerful than ever before as Elise faces demons in the present and ghosts from her past.

Only, she can’t remember them.

The trailer is full of moments that make you jump and frights that make your skin crawl, not that we expected any less. We’re massive fans of horror films here at Fan Fest and the Insidious films have never let us down.

The release date for Insidious: The Last Key is January 5th. Will you be seeing it when it hits theaters?