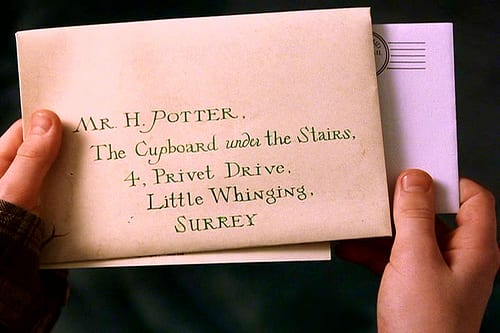 Hey, Harry Potter super fans!  You’re going to want to swing by the closest Gringott’s Wizarding Bank and empty your vaults ASAP for this one!  There are some seriously awesome items from the Harry Potter films going up for auction this month and you are definitely going to want to add these items to your collection.

The same auction house which is selling Michael J. Fox’s light up Nikes from Back to the Future II,  is also auctioning off Harry Potter’s Hogwarts letter.  You could own the very piece of mail which flew into the Dursley’s house and told Harry that he would be heading off to the school of witchcraft and wizardry!

In addition to Harry’s Hogwarts letter, you could also bid on Ron’s howler and two items which were given to the cast and crew.  The additional items include an engraved pocket watch, an autographed poster and more!  You can view the items that are currently up for auction HERE.

If you are interested in bidding, you can place offers in person, over the phone or online leading up to the auction via the auction site.  The auction will also be live-streamed when it takes place on September 26th.

What do you think?  Are you going to bid?

Michael J. Fox’s ‘Back to the Future II’ Nikes Go Up for Auction

The Sorting Hat divided America into the four Hogwarts Houses, Where did it Place You?