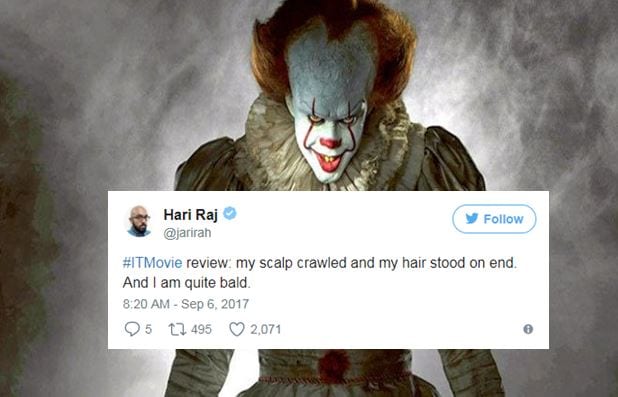 It bothers me that the #ITMovie and #IT hashtags do not have an automatic balloon or clown emoji.

#ITmovie is fantastic. Exciting, fun & very funny. All the actors are great. And it’s really intense too. 5 severed arms out of 5.

the marketing team for the #itmovie have really outdone themselves pic.twitter.com/1PKh0MJTLK

#ITMovie review: my scalp crawled and my hair stood on end. And I am quite bald.

IT is going to make a ton of money this weekend. I’m already pumped for the sequel, IT 2: BRUTE. #ITMovie

#ItMovie is the kind of movie younger kids will show at sleepovers. It would be constantly sold out at Blockbuster were it still in business

Granted I don’t think any kid under the age of 14 or so should see #ItMovie cause it’s that damn scary. You’ll mess a kid up showing them it

Wow, Syndrome did not take his loss to Mr. Incredible well. #ITMovie@StephenKingpic.twitter.com/hepWyu6BbE

I’ve never unfriended anyone over politics. I just unfriended a guy for spoiling IT. #ItMovie2017#horrornerd#ITMovie

The face you make after surviving the demogogan and now have to face pennywise #StrangerThings#ITMovie lol pic.twitter.com/kmuDIYjxJk

The kids also displayed a believable, exceptional performance, and I believe that they themselves were the heart of the film. #ITMovie

Coincidence? I think not… See IT awaken starting tonight in @ITMovieOfficialhttps://t.co/9fEytldGu7#TBT#ITMoviepic.twitter.com/yrnLXLWpmU

Bill Skarsgård wasn’t clowning around in his unsettling portrayal of #Pennywise. An incredibly haunting performance for sure.#ITMovie

You best bet if I see a red balloon tied to a storm drain, I’m walking a mile out of my way to avoid all that #ITMovie

Well that was some disturbing shit lmao #ITMovie

Fan Fest EXCLUSIVE INTERVIEW: Jaeden Lieberher on his ‘IT’ experience, and what fans can expect!

Bill and Alexander Skarsgård have the best Movie Premiere Photos