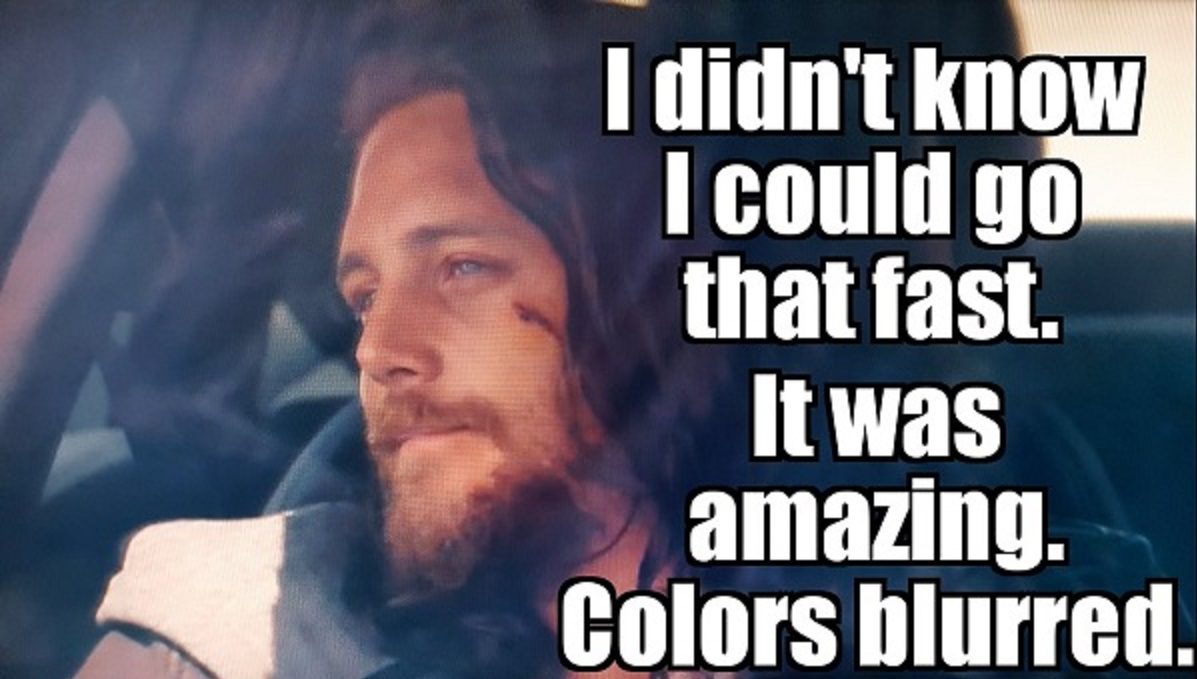 While Baz come to two major revelations, the other boys do a little growing up this week. Smurf has a “Sorry, not sorry” moment that costs her $100,000. And Josh makes a bold move on Nicky.

Pope speaks to the police about the robbery. He is in the clear with a solid alibi, but the police start asking him about his brothers. Pope befriends another ex-con at the church. The ex-con has been avoiding the police because he has no alibi and he wouldn’t pass a drug test. Pope insists it’s better for him to speak with the police. He even tells the guy how to beat the drug test. Then he plants the stolen church checks in the guy’s car, pinning the robbery squarely on him. Amy is distraught that she ever trusted the guy. She even helped him look for an apartment when he got out of prison. She let Pope look at a lot more than her apartment, I wonder how she’ll react to his betrayal.

Josh takes the opportunity to get close to Nicky, letting her know that Javier isn’t coming back to hurt them. But despite all of Craig’s shortcomings, Nicky is still with him. Let’s face it, Craig’s a hard habit to break.

Craig starts a new job, an actual job, that is recon for the bigger robbery job on a yacht. Everyone knows he’s up to something when he wakes up early and put pants on. 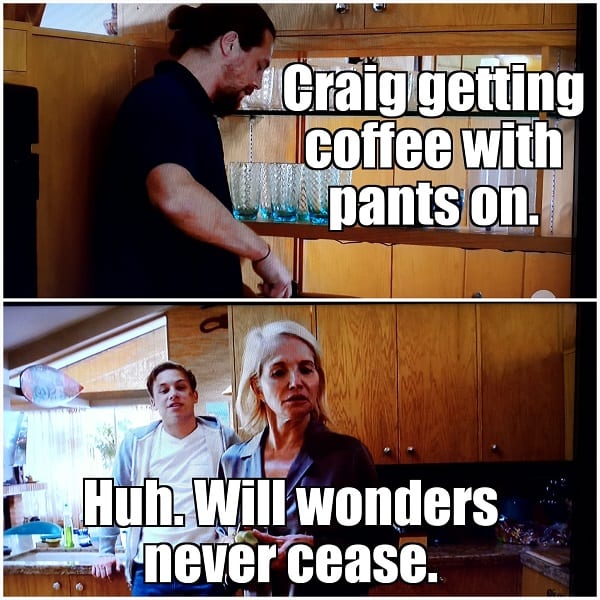 Nicky chastises Craig about the recent change in his behavior. She knows something’s up and insists she can keep her cool. Craig let’s Nicky in on his plans for the yacht heist. She wants in. 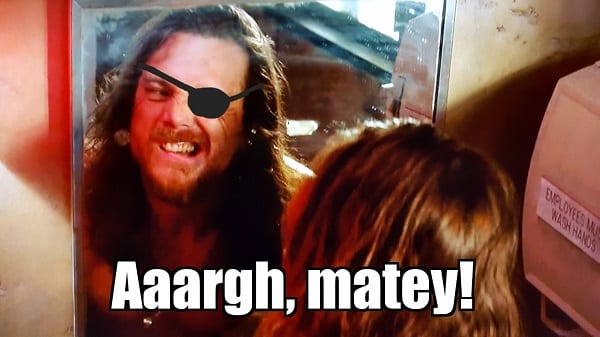 He ingratiates himself to a waitress who is harassed by the rich customers. She tells him to look at the bookings to pick work with the clients who tip well. 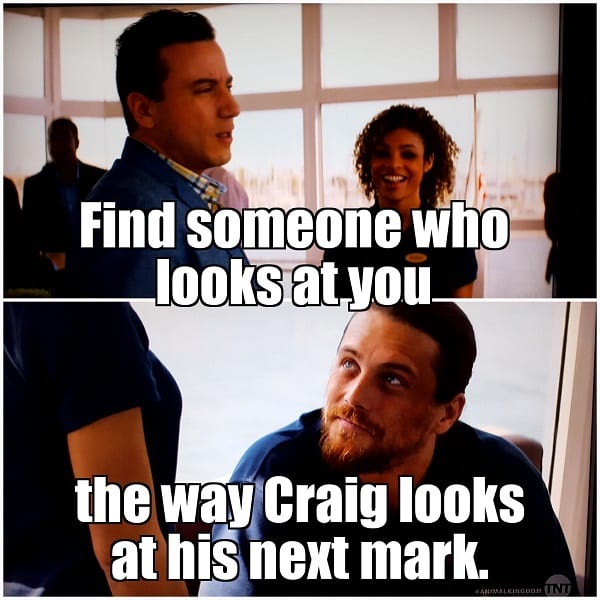 She tells him to avoid the ultra-rich clients who never tip. But those are the ones he wants to rip off. I wonder if he’ll leave this waitress a really good tip for the information. 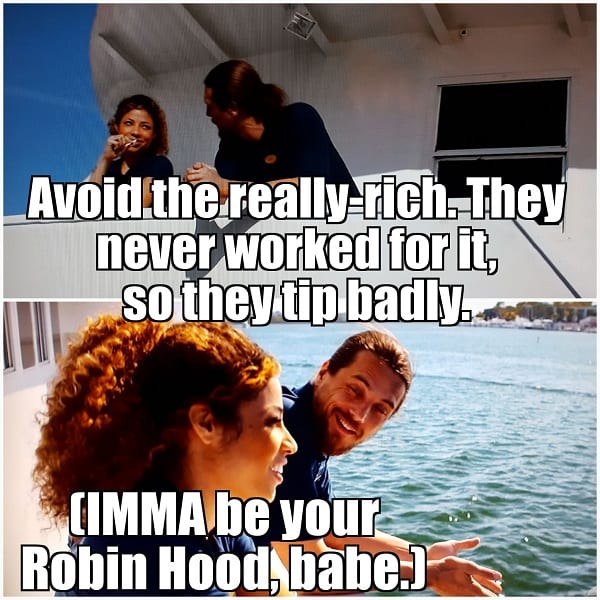 Everyone is confused about the new Craig. Even his best bro, Deran is shocked to learn that Craig has kept his catering job, and is making mental notes, and is keeping those notes in order, and managing to regurgitate these thoughts coherently. You get the picture. Maybe Nicky has changed him. 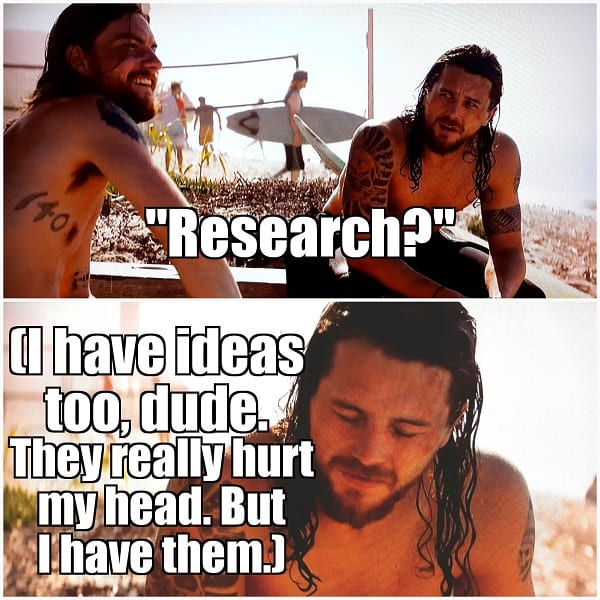 Josh brings home a new friend, Shannon. Nicky REALLY doesn’t like Shannon. Shannon thinks it’s strange that Josh’s ex lives with him. But Josh reassures Shannon it isn’t strange because Nicky is screwing with the dumbest of his uncles. Nope, not strange at all. 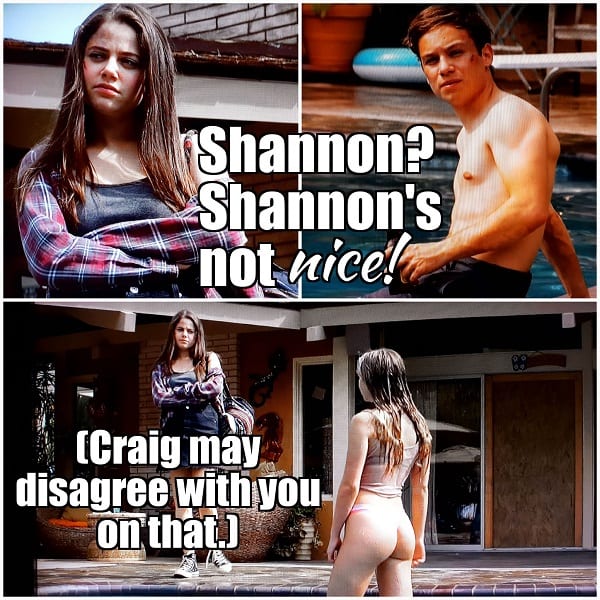 Later Nicky lays into Josh for bringing Shannon around. She defends Craig’s IQ, by telling Josh that Craig is planning his own job. Nicky’s really bad at keeping secrets. It’s a good thing Smurf sends her away whenever family business is conducted. I’ve said it before, she and Craig are going to have the dumbest, but prettiest babies ever. Unless of course Craig takes a liking to this Shannon girl. I think that, and making Nicky jealous, may be Josh’s end game.

Josh bonds with Smurf while filling their own bullets. He tells her how he almost left his mom, even had his bags packed. Then that night they both had to fight off his mom’s crazy ex-boyfriend together. After that his mom apologized to him and he didn’t leave her. 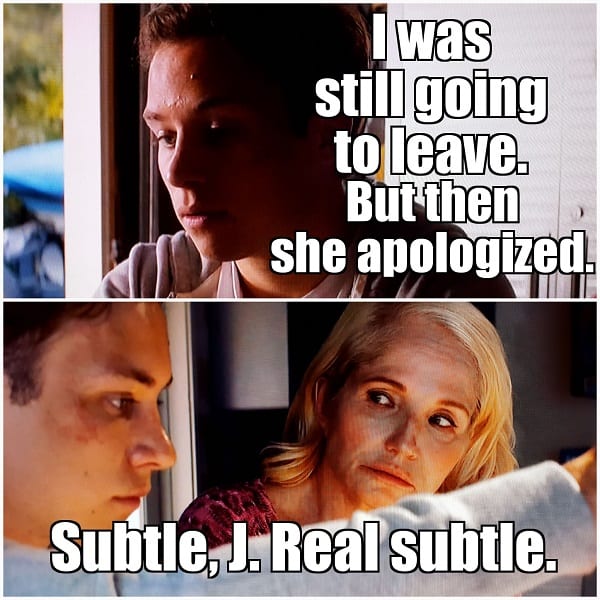 Baz tracks Smurf to the storage unit, with the same device used the find the safe in the church robbery. One greased palm and a quick photo under the door later, and Baz has proof that Smurf has been skimming money off of all their jobs since 2004.

Smurf did manage to lose $300,000 to Craig’s dad, Jake, and still paid back the $200,000 to the boys, and then paid each boy “I don’t apologize” money of $20,000 each ($100,000). And Smurf still had money in her safe after all that. That’s a whole lot of skimming. Yes, Smurf gave each boy $20,000 because she doesn’t give apologies, they don’t mean anything if they don’t come with value. Or she is reminding them that she holds bigger purse strings. Smurf tells the boys she doesn’t need to be apart of their jobs, but she would like them to launder their money through her legitimate businesses, and she’ll give them paychecks. That’s one way to keep tabs on them. 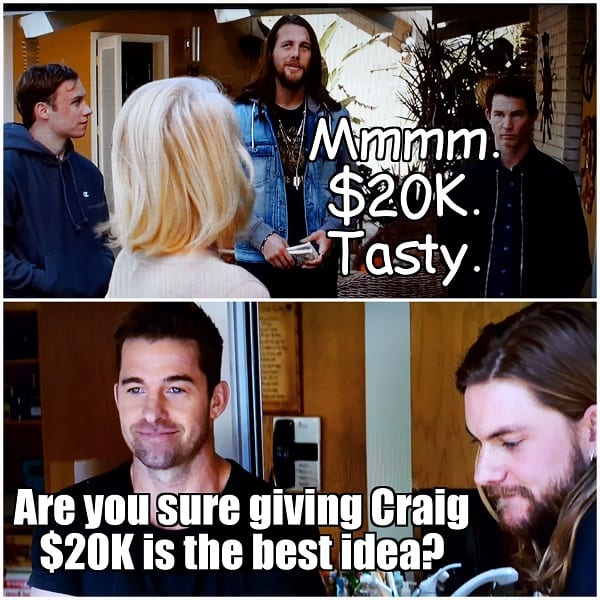 Baz also discovers through his private detective that Patrick, the police officer who knows Lena, has an informant file on Catherine. Baz can’t believe it at first. But he doesn’t have a difficult time understanding that Smurf would kill Catherine if she thought she’d talk to the police. Unfortunately, he tells Pope, who is still eyes and ears for Smurf and who killed Catherine. At least Pope now knows he killed Catherine was for a good reason. But Pope knows full well that Smurf won’t do time for this crime. So who will go down for this one?

Deran has been sleeping with the head of the community business organization. The same guy that is expecting monthly dues be paid to him. 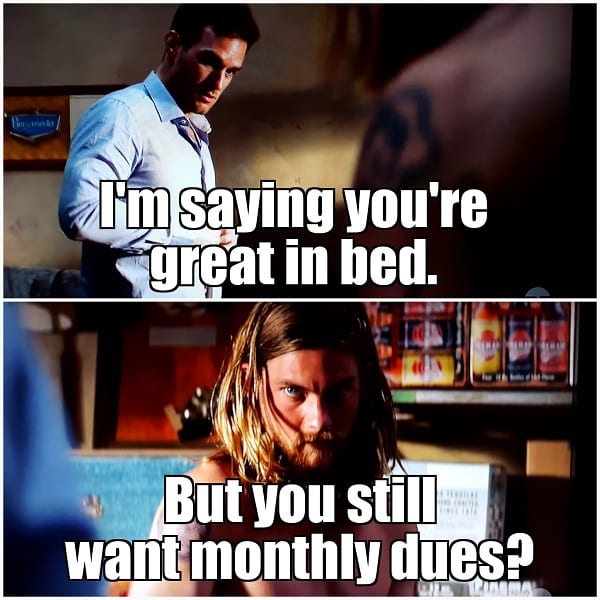 At least he learns a few business tips from the guy. 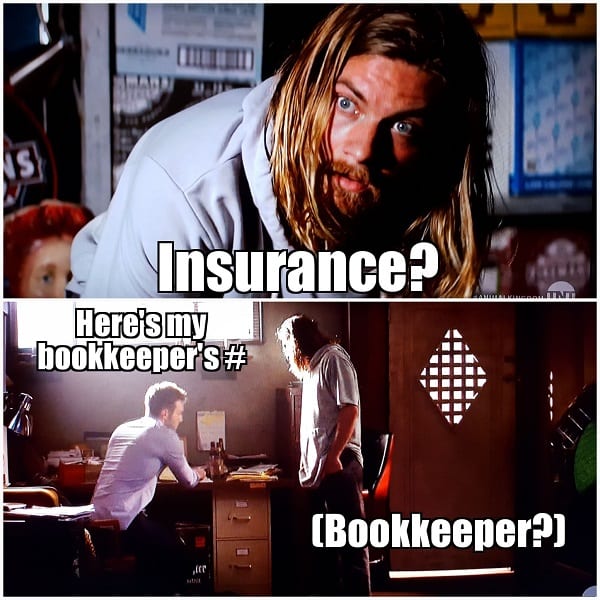 Will there be a shake down of Deran’s bar? Or will the Cody brothers step in to scam this guy, or find out that these “fees” end up in his own pocket?

When Deran meets Clark for drinks, they share a mutual distaste for the community business guy. Deran tells him Clark wants to become legitimate after buying the bar outright. Clark wonders whether Deran’s brothers will let that happen. That is the $600,000 question. 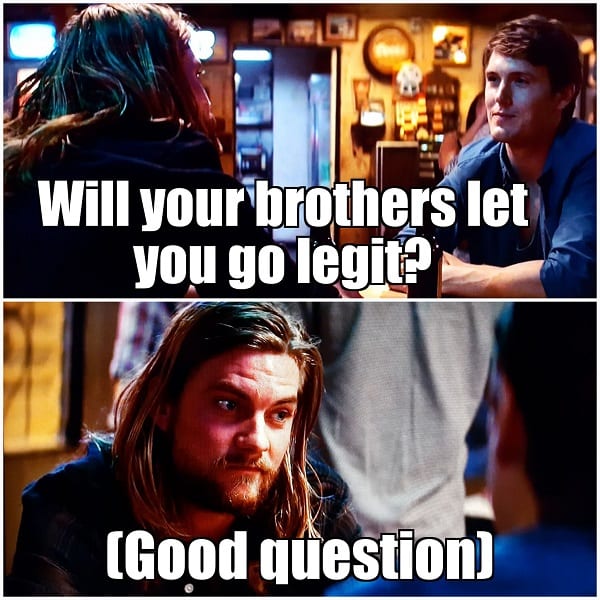 Will Smurf try to get the $300,000 stolen by Jake? Will there be gossip about Nicky in high school after what Josh told Shannon? Will Nicky end things with Craig after the introduction of Shannon, or will they both be hung as pirates? Will Baz confront the other brothers on Smurf’s skimming? And will Amy find out about the real robbers? Find out on Animal Kingdom, Tuesday’s at 9pm on TNT.