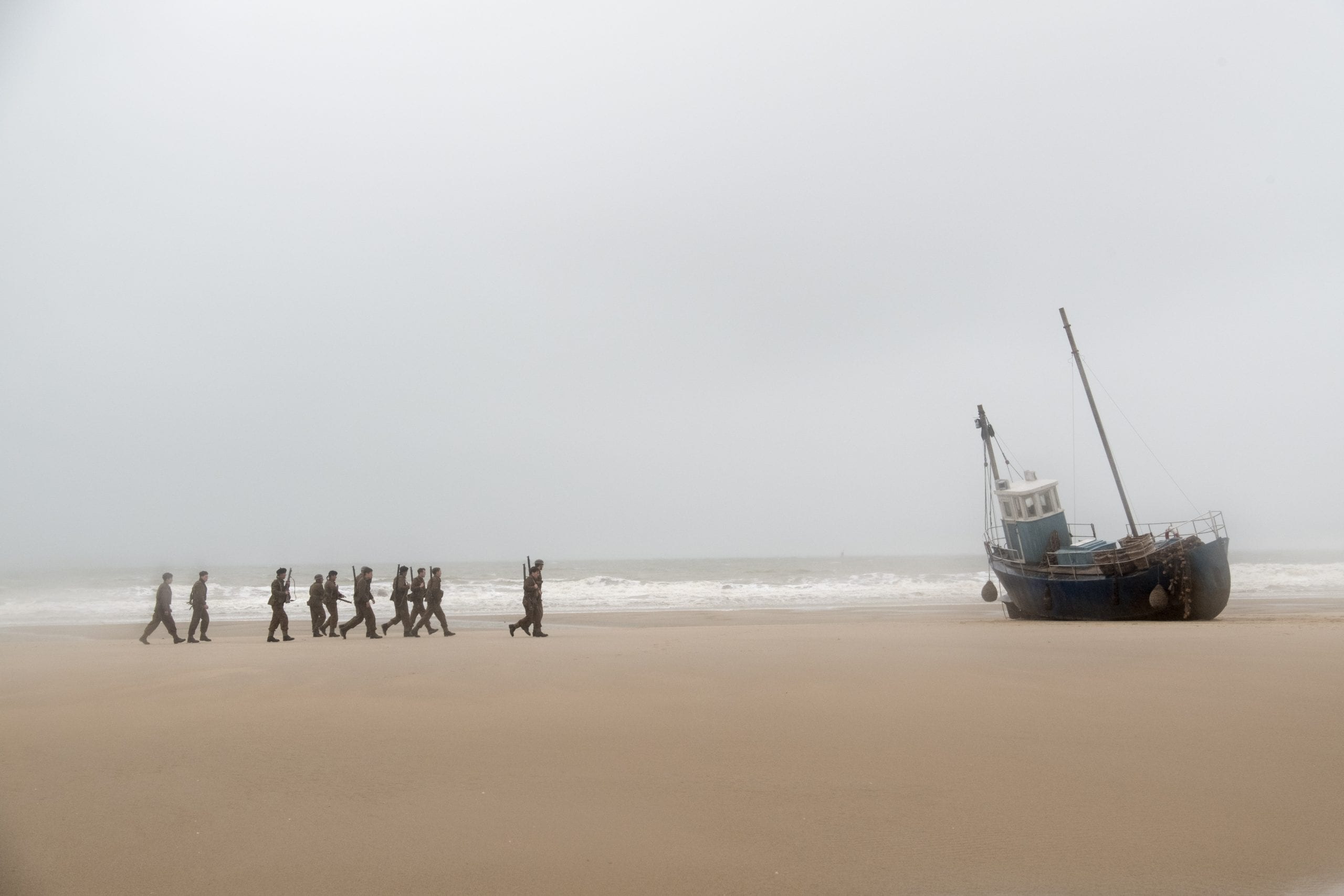 I’ve been a film fanatic as long as I can remember. Films have molded my personality, created sparks in my imagination and have given me a career path to follow. ‘Review’ can be a dirty word nowadays, as a lot of our personal opinions don’t necessarily align with those of most critics. But, that’s why I love films. They divide us by also bringing us together in the most magical of ways. So, instead of giving you a review, I’m going to give you an analysis of what aspects are strong in the specific film, and what are weak. This is my Atypical Analysis.

‘Dunkirk’ opens as hundreds of thousands of British and Allied troops are surrounded by enemy forces. Trapped on the beach with their backs to the sea they face an impossible situation as the enemy closes in. The film is Written and Directed by Christopher Nolan (Inception, The Dark Knight) and stars Fionn Whitehead, Tom Hardy, Harry Styles, Cillian Murphy, Mark Rylance and Kenneth Branagh.

Expectations: I know this section might invalidate my review for some; but, I feel as though it’s important to know. I’ve never been a huge Christopher Nolan fan. I know he has a massive following, but, I’ve never fully understood the ‘hype.’ With all of that being said, I went into Dunkirk with low to no expectations; especially being the war movie fanatic that I am.

Writing: Written entirely by Christopher Nolan, this is not a film about the dialogue. In fact, there is very little dialogue throughout the film. But, when the characters are speaking, they are believable, simplistic and very straight forward. However, even though the script isn’t crammed full of dialogue, I can say that one of the most powerful scenes of the entire film is a monologue. A damn good one. So, if you’re expecting something wordy like Inception or Interstellar, turn back now. This isn’t about dialogue; this is about feeling, emotion and tension…which leads me to my next section.

Acting: A lot of films we’re used to watching have a main character, supporting character, etc. Dunkirk is not a film we’re used to watching. We follow many characters throughout the film that help give us a better perspective of what life was like fighting alongside all the others that risked their lives for ‘the greater good.’ But, with minimal dialogue, it is up to these actors to bring the scenes to life. In fact, some scenes focus solely on the actors as they react to something only the audience can hear (as seen in some of the trailers). A majority of the cast are newer actors on the scene, and they delivered on every level creating a realistic performance to immerse you further. The thing about this film is that all it took was for one lukewarm or subpar performance to ‘break the camels back.’ This brings me to Harry Styles. A lot of hesitation surrounded this movie upon his casting seeing that this was a pretty big first leap into acting. I can say with confidence, Mr. Styles was fantastic. While a lot of the scenes were filled with panic and tension, Harry Styles carried one of the films strongest scenes showing a range of emotion rarely shown in the film. As usual, Cillian Murphy, Tom Hardy, Mark Rylance and Kenneth Branagh were all fantastic across the board! While it’s tough to pinpoint anyone in this film winning a ‘Best Actor’ accolade; there’s no denying that this ensemble cast shines bright through the grit and darkness of the film.

Sound/Score: This is a tricky category. I’ll start with the bad and work my way to the good. While the sound design and score were masterfully done; some of the dialogue is borderline inaudible. I’ve found that this is an issue that surrounds a lot of Nolan’s previous films (EG: Bane’s voice). The screening I attended was loud…and, I mean LOUD. But, I still managed to miss some key lines spoken by characters throughout the film. Now, for the good; Hans Zimmer is one of the main reasons each scene felt as tense as they did. By utilizing the sound of a ticking clock (heard in the trailer) and air sirens, he was able to seamlessly build the music up to its highest point and drop it out to allow the audience to breathe and carry them from scene to scene. I know it wasn’t, but, it felt like musical composition drove all 107 minutes of this film…and I loved every second of it! On top of the score, the sound design was one of the greatest things about Dunkirk. Every single scene felt authentic and as if you were right there fighting alongside the soldiers, or in the cockpit with Tom Hardy. The sound effects and atmosphere are award worthy. The sounds of war on film have never sounded so beautiful and organic. On top of great acting, this film needed to sound fantastic…and it did.

Visuals: All 10s across the board in this category. From the minimal use of visual effects, to the cinematography putting the audience into each scene; this is one of the most visually appealing films in existence. When you’re in the cockpit with Tom Hardy, you are truly there. The camera shakes and vibrates with the vibration of the plane. If you’re underwater with Fionn Whitehead, you are truly there, sluggishly moving along. There are a lot of blue tones to the film which make you feel cold like the soldiers in the water or on the beach. I can’t stress enough that this film (powered by its visuals) make you feel present in each scene. Cinematography is one of the key elements that can fully immerse you in a film, and Dunkirk immerses you tenfold. But, what makes each scene so unique is the use of vehicles, planes and ships from that time period. They look and sound convincing…because, they are real.

Directing: Christopher Nolan has always been a complex filmmaker who likes to tell complicated stories. From the get-go, Dunkirk is quite the straight forward story. But, Nolan doesn’t let the simplicity drive the film. Instead, he tells a non-linear story split into three different perspectives. While, this form of storytelling is quite taxing (and, a bit tough to adapt to right out of the gate) you slowly witness the story come together,  and you realize that what Nolan has done is beyond impressive. At first glance, it seems like Nolan is complicating the story for the sake of it; because, that’s his ‘style.’ No, that isn’t true. There is only one way to tell this story, and it’s the way it’s told on screen. His confidence in the non-linear narrative shines bright as every single cut flows seamlessly into the next. Dunkirk is Nolan’s pinnacle. He was made for this film and everything he’s done leading up to this (whether you like it or not) has prepared him for his ‘final hour.’

Wrap Up: While calling Dunkirk a ‘masterpiece’ is a bold statement (as is calling any film a ‘masterpiece’); however, I can confidently say that Dunkirk is Christopher Nolan’s masterpiece. The script might not be full of smart, captivating dialogue, and the characters remain nameless (mostly), this film is still effective. It grabs you, shakes you and doesn’t let go until the credits roll. Being a war film fanatic, I can easily say that this is one of, if not the best war film ever made. This isn’t a film about characters, it’s about the situation these characters go through. It’s showing you the fear, tension and unexpected nature of war…rather than showing you the blood, loss and horror of it. Seeing this film helped me understand and appreciate Nolan differently than I did before viewing Dunkirk. He isn’t just a filmmaker; he’s a filmmaker who strives to create experiences for the viewer. He’s been creating experiences since day one with Following. And, Dunkirk is just that…an experience. You aren’t just watching the film; you are a part of it. So, see this film in 70mm in the loudest theatre possible, pop a Xanax and prepare to hold your breath until you exit theatre.