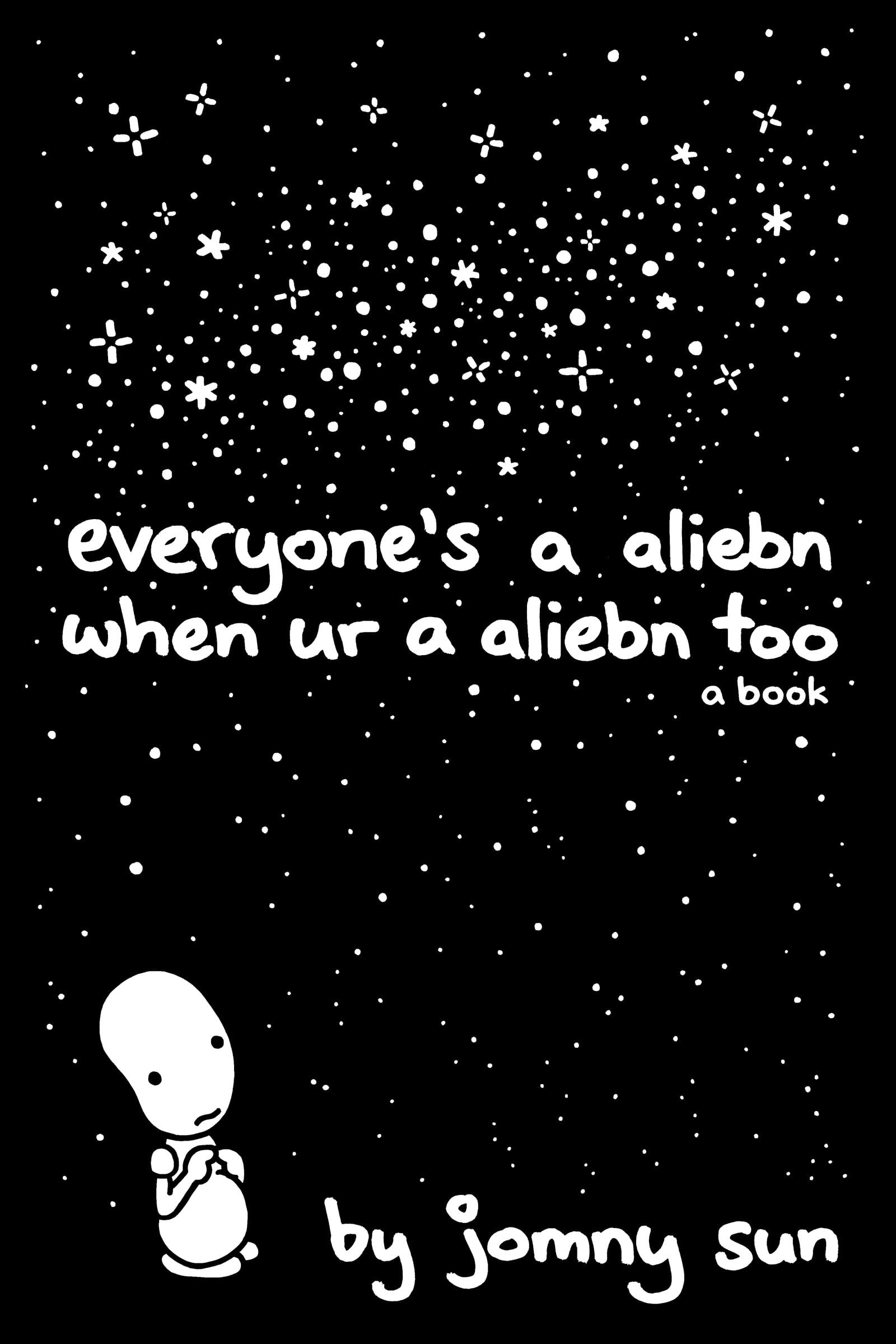 ‘Sup readers? Welcome to this week’s On The Shelf column, and if you’re new to this whole thing, here’s the scoop: I take a newly-released piece of literature (across the genres and mediums, though it’s 100% likely to be a fiction piece rather than non-fiction) and review it on the basis of whether or not it’s good enough to merit a personal copy in your library, or if you maybe want to stick to having it on your (space-saving) ereader. There has been one occasion where I couldn’t recommend a book in any way, shape, or form— but that’s, luckily, a rarity. This week’s read came as a bit of a shock to me: I was about to read something new adult-y for the sake of variety (as my last three reads have involved some type of mystery) when a package turned up on my doorstep. Everyone’s a Aliebn When Ur a Aliebn Too: A Book by Jomny Sun (AKA, Jonny Sun).

Everyone’s a Aliebn When Ur a Aliebn Too: A Book implies several different feelings with just its front and back cover: it promises a friendly twist on an Invader Zim-esque tale, the artwork looks like it’s appropriate for all-ages, and it’s chunky enough to hold a complete story. But when you open up the front cover…

This is honestly one of the weirdest graphic novels I have read this year. It’s so unlike anything I’ve encountered before: an existential gut-punch dressed up with cute typeface and disarmingly simple illustrations. Jomny, an alien from the far-off reaches of outer-space, is sent to observe Earth and the humans who inhabit it; however, he lands in the forest and quickly, eagerly latches onto a ragtag band of animal (and a tree, and what looks like Bumble from 1964’s Rudolph the Red Nosed Reindeer) friends. Through his probing interactions with his new group of research subjects/Earth inhabitants/friends, Jomny learns about a hodgepodge of issues (loneliness, love, identity, death, etc.) with the sort of tilted jauntiness of a college student saying “Screw it,” and wandering down to the on-campus bar between brain-frying classes to get utterly plastered with a bunch of inherently-different-but-somehow-the-same patrons. There’s an egg who doesn’t know what it wants to be once it hatches (does it want to hatch?), an owl who feels like an imposter, an avant-garde otter, and a dog who’s always happy, among other delightful woodland dwellers. Then there’s Nothingness. It’s all around us every day, it’s what happens when we die, and it can also get depressed and leave if it feels unwanted.

For real though: I enjoyed Jomny’s rambling log as he crammed life lessons big and small into his research log, and found myself nodding along, clutched by a weird emotional response, more than once.

But much like the erstwhile college kid stumbling around after one too many beers, the thing that works in Everyone’s a Aliebn’s favour begins to grind on the nerves after awhile: while it’s true that Jomny is an alien whose grasp of the language would be far more suspect if he were able to speak in proper and coherent sentences, Sun’s choice to write his book like he was composing a graphic novel’s worth of witty Tweets (“but ur a egg.”) lost its charm about a third of the way through. Regardless, that drunk college kid has friends and family who love them— so, too, Everyone’s a Alieb will have an audience who sing its praises and hold it up as an example of true greatness in the field.

I personally got a kick out of this and will be keeping it on my shelf with pride. I know the book won’t be everyone’s cup of tea, but if you want to find out for yourself (and delve into life’s greatest mysteries/tragedies/double-edged swords), you can purchase a copy here.