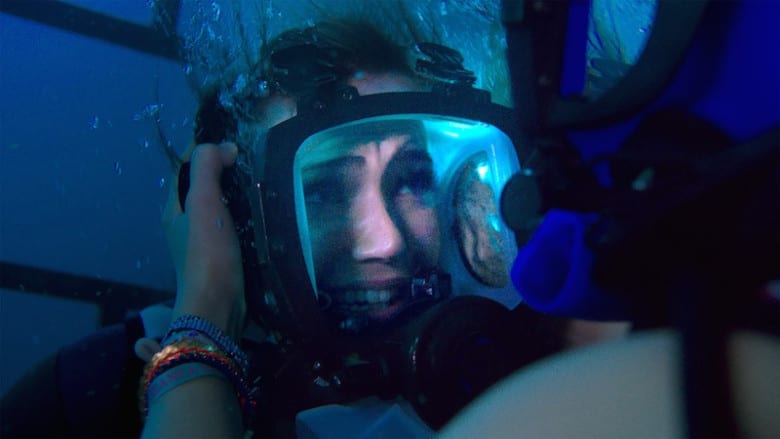 Life has been quite busy for us lately, but this weekend we took some time off to visit our local cinema. One of the films we checked off of our ‘Summer Must-See’ list, was 47 Meters Down. We’re already gearing up for Discovery’s ‘Shark Week’ and we just watched Shallows last week, so 47 Meters Down was right up our alley.

The film stars Lisa (Mandy Moore) and Kate (Claire Holt), two of our favorites, and the premise is that Lisa invites her sister on a trip after saying her boyfriend couldn’t make it, Kate later learns that Lisa’s boyfriend wasn’t at work or unavailable at all; he had ended their relationship. The opportunity allows the two to bond, and we learn as time goes on, that it was something long overdue.

Lisa felt that her life with Kate was a competition as they grew up and she reveals that to her during a pretty emotional moment. However, before things got emotional, the pair had fun. They were at a lovely resort enjoying drinks, sunshine, and a bit of romance. After spending some time throwing back drinks, the locals invited Kate and Lisa to go on a shark watching adventure the next day which the two eventually agreed to.

The next morning, Kate and Lisa meet up with Javier and Louis and the captain of the ship Taylor before setting off for their excursion. The boys get into the cage, see the sharks up close, and return safely – plus Kate and Lisa get to see the sharks from the boat. There’s initially some hesitation on Lisa’s part, but after Kate brings up Lisa’s ex and making him jealous – well – she’s on (or in this case off) board.

For a few moments, their time underwater goes swimmingly, but when Lisa gets a bit spooked she asks them to bring the cage up. From there, the entire day takes a plunge. (We’re only a bit sorry for our play-on-words up to this point)

They quickly drop 47 meters down and they’re both knocked unconscious. Upon waking up, they realize that they’re in a lot of trouble, however, Kate swims up just high enough to reach the boat via their radio channel is assured that someone will be down again. She makes it back to the cage but help doesn’t come quickly. With air and time running out the pair face struggles together and individually that threaten to take their lives. This is also when they have the talk that Kate never felt like she was competing with Lisa, while Lisa admits to viewing their relationship as such.

A few times in the film, they’re warned from swimming up too quickly – if so they could get the bends. Kate is also warned that, if they change their oxygen tanks under water and quickly, they could suffer hallucinations from nitrogen. Lisa doesn’t hear that news, at least, not that the audience is aware of.

Those things kept in mind, the film continues, a few shocking and gruesome moments happen, and there’s a twist at the end. It paints a sad reminder that there’s not always a happy ending – even if it seems just within your grasp.

While some critics were a bit harsh on the film – which is their job, after all – we really enjoyed the film. There were a few unrealistic elements but all in all, we think it told a cautionary tale, and perhaps reminded us that sometimes it’s okay to be the ‘boring’ friend.