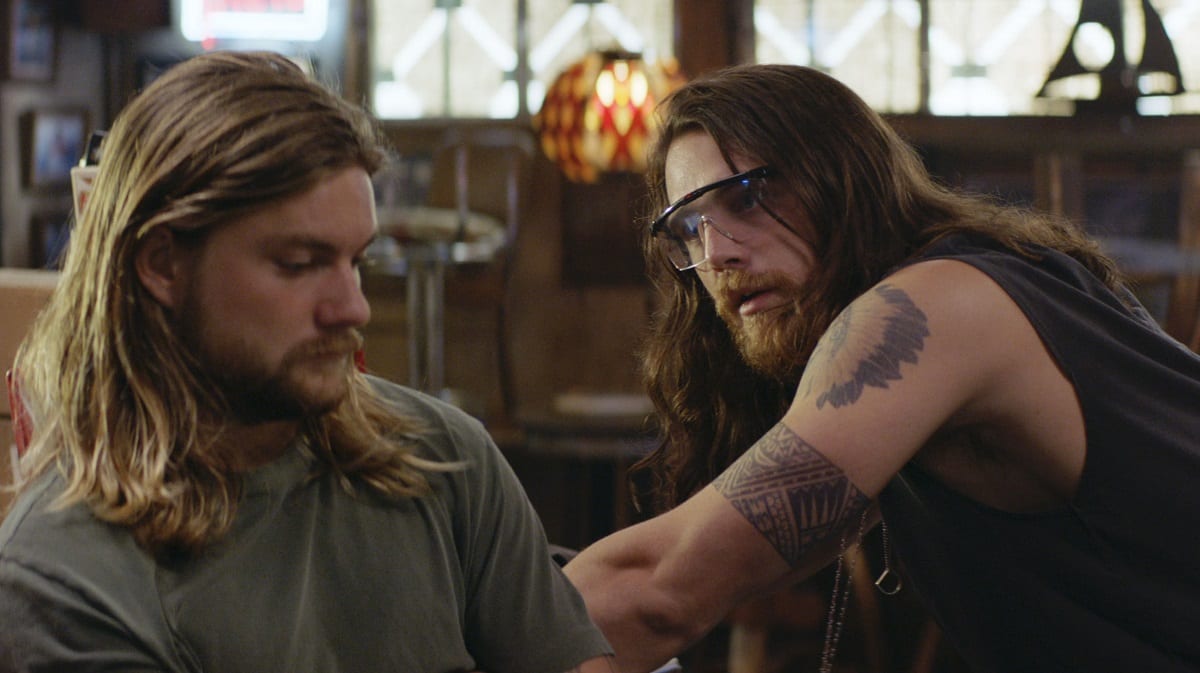 This week Deran opens his bar and Pope goes on a date. The future is looking up for these two, for a split second.

Smurf is worried about being alone in the house when she hears noises in the night. She still has Josh and Nicky there. Is she worried about going senile, like Manny? She did forget the correct day of the week on the last safe job. Later in the episode she becomes paranoid about being followed by a plumbing truck. 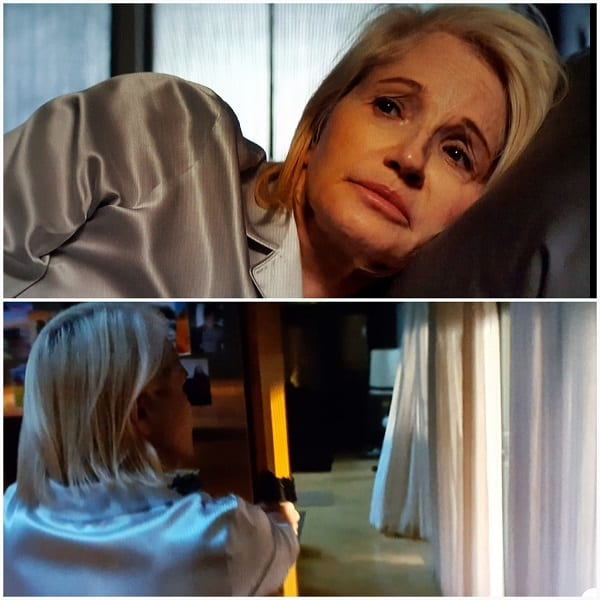 The next morning Smurf lets Nicky know (in front of Josh) that Craig can use the front door when he sneaks in at night. She’s tired of worrying if someone just broke in a bedroom the window. 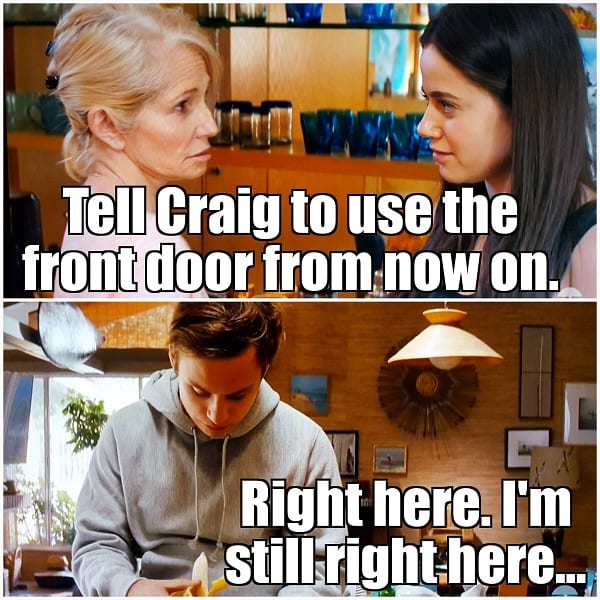 Baz learns he is shut out of the properties when he goes to get his tools. Smurf tells him she’ll set up a time that they can go over what’s her and what’s his in the storage units. 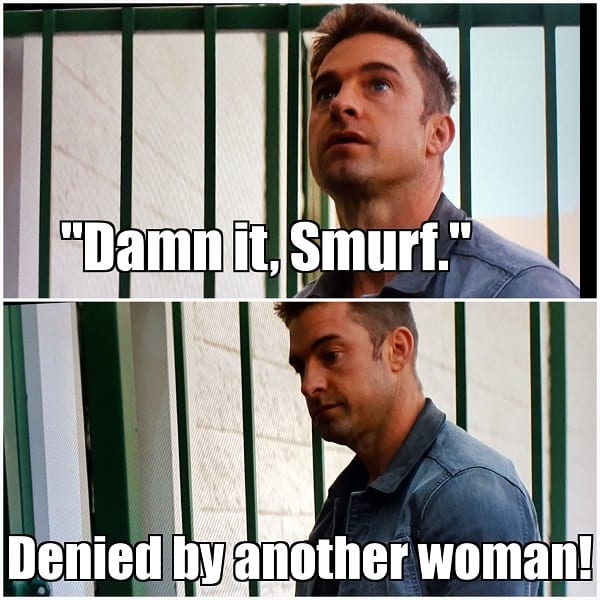 Deran doesn’t show up for the meeting about the church job because of his bar. Baz is not too happy about it. But Deran doesn’t want to be cut off the job because he needs to money to keep the bar afloat for now. Baz goes out of his way to be nice to his brothers. He must be really desperate with Smurf freezing his contacts and equipment. 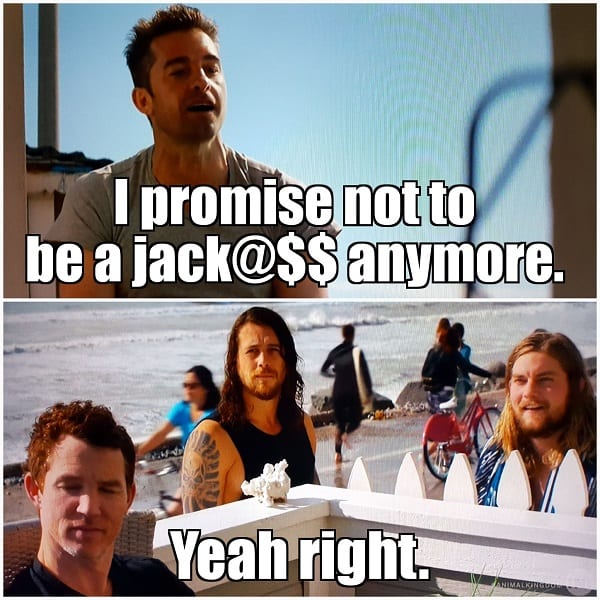 Smurf has a heart to heart when Nicky worries about Craig and all the other women. She tells Nicky that she has the power over Craig and every other man. She just has to choose to use it and not give it away. Has Smurf found a replacement for the daughter she kicked out years ago, or just another loose lipped informant? Nicky does let it slip that Daren has a bar. 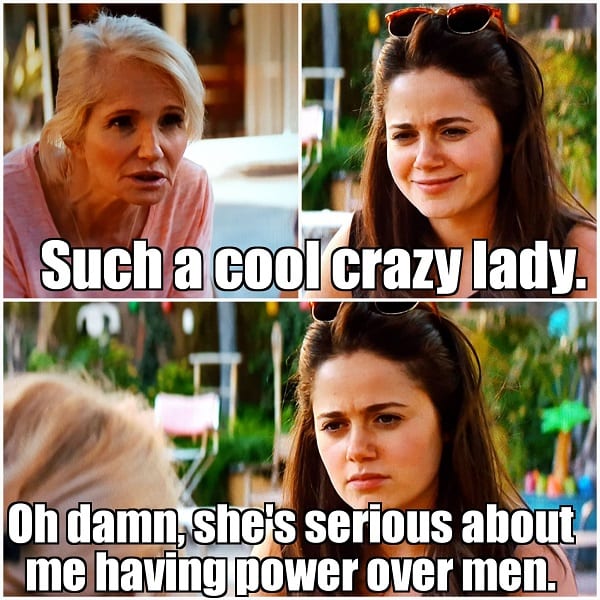 Deran invites his brothers and Smurf to the bar opening. He is none too happy when Craig assumes he can bring his under-21 girlfriend to opening night with a fake id. Craig will definitely mess things up for Deran.

Craig tells all their buds at the beach about the bar opening, promising them free pitchers if they bring broken boards. 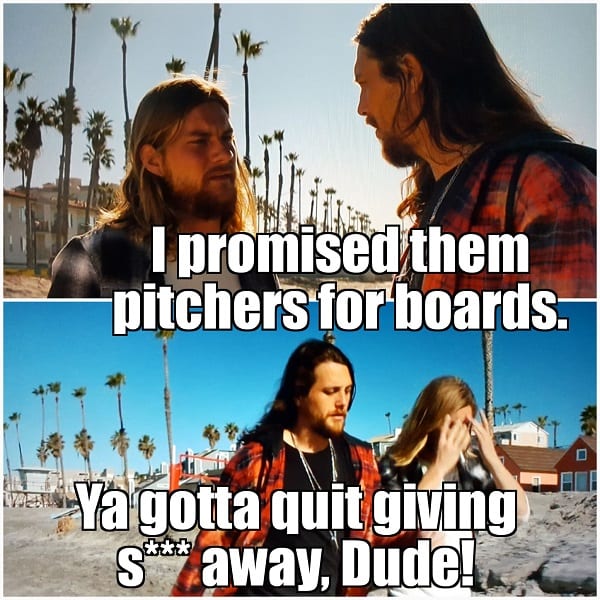 When Deran scolds Craig for giving too much away, Craig tries to make amends by stealing a beer truck to compensate for the comped alcohol. Deran reminds him the truck may be a GPS tracker. Poor Craig, he just wants to help his bro. But Craig still needs his hand held on jobs. Let’s hope he isn’t relying on Nicky to be his brains, she’s barely passing trigonometry even with Josh’s study help. 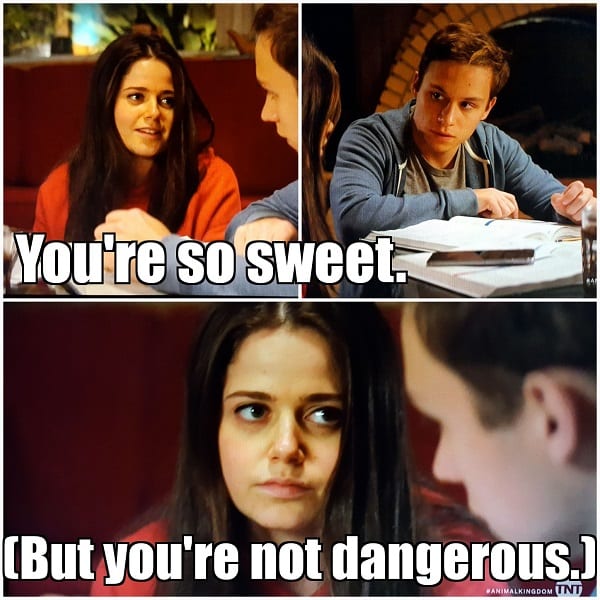 Pope goes on a proper date with Amy. He buys a new shirt and everything. The brothers are amused. 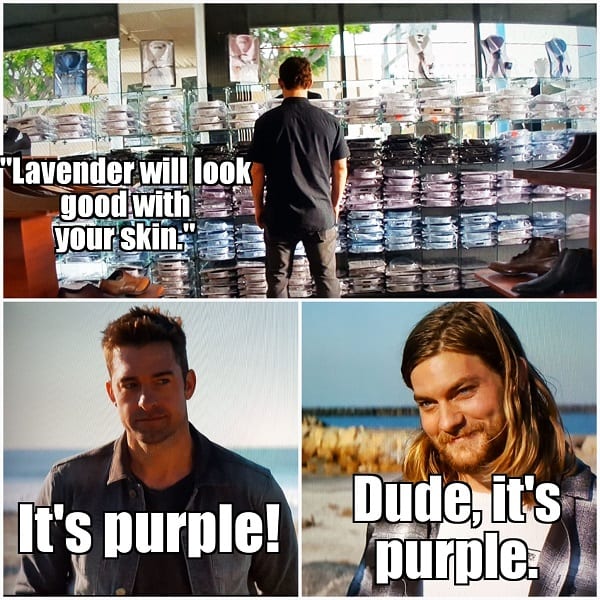 On the date, Pope admits he was in prison for three years. Amy is now more attracted to him. Does that mean she’s a forgiving Christian or another Nicky looking for a bad boy?

Smurf invites Josh to take over the accounting and “real” laundering business that the family is in. She thinks he’s smart enough. Is she also worried about forgetting where all the money is hidden?

Another reckless Craig moment ends when Deran flushes all of Craig’s cocaine down the sink on opening night. Craig burns off his frustration by having sex with a near stranger in the bar’s office. Never fear, all is forgiven, or maybe just forgotten, by Craig within minutes. 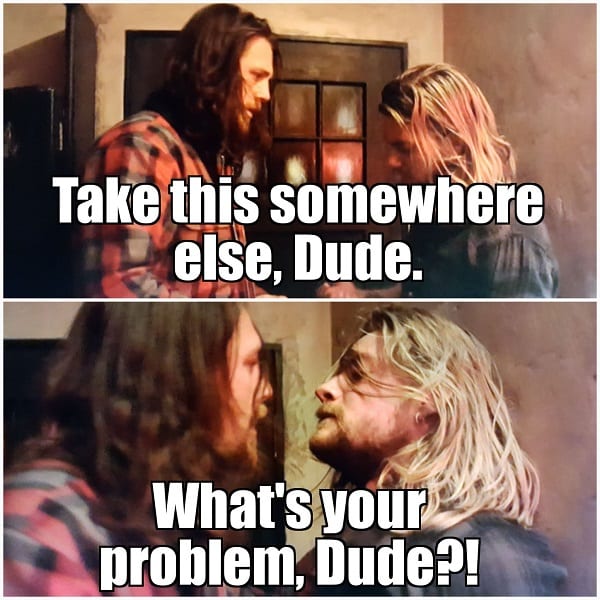 When this new woman won’t go see a band later than night Craig calls faithful Nicky. Nicky had been studying with sweet Josh, but she takes off. Old habits die hard. 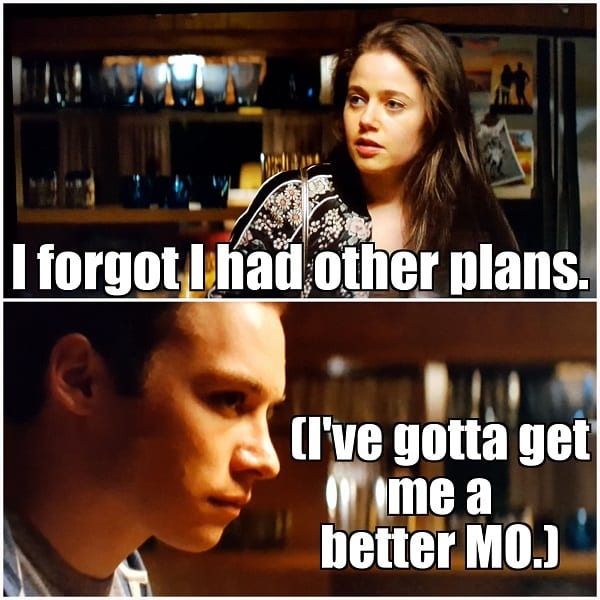 Deran’s boyfriend arrives on opening night. Just as Deran starts to open up to him, Smurf insists on a speech. The she basically lowers Deran to the level of a child, reminding everyone how he froze upon an ESPN interviewer after a surf competition. (So Daren’s story to the liquor license inspector was true.) 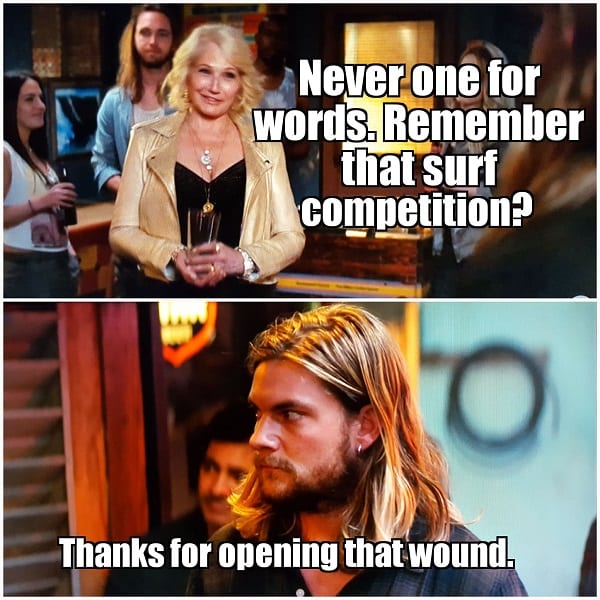 Early on Craig tells Nicky that the broken surf boards decorating the bar are about going for your dreams no matter what the cost. Maybe. They’re also a reminder that Deran feels broken. Deran finally tells Smurf he’s gay and really lays into her about her brand of mothering. We don’t get a chance to learn what she thinks of the news. 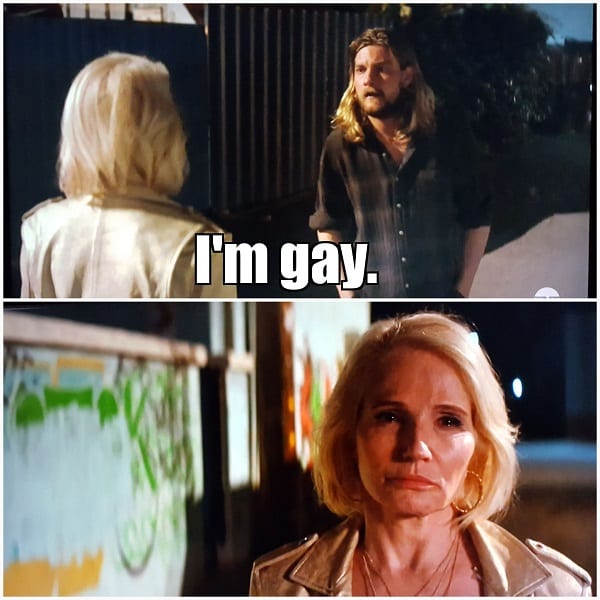 Even though Craig is dumber than a bag of rocks, he’s completely loyal. He comes back to the bar to help clean up and tells Deran he has won, because he created the bar without their mom. We should also note that Craig hasn’t said anything about being part owner of the bar this episode. His bro needs a win. 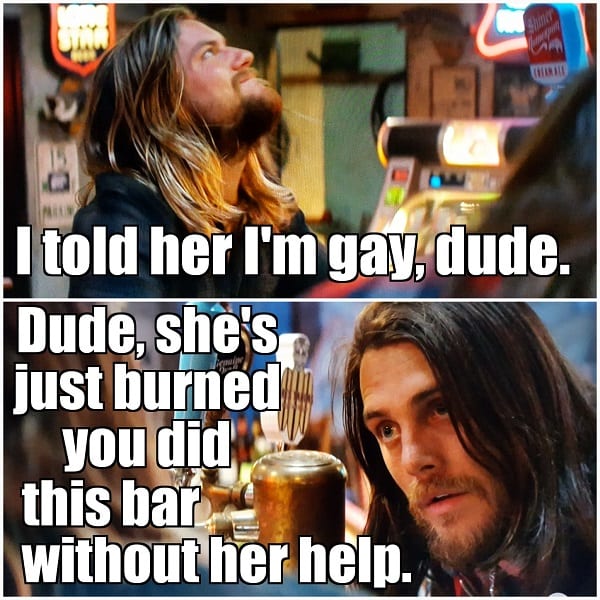 How quickly will Craig screw up Deran’s dream? Is Pope serious about Amy or is it a ploy for the church job? With Josh and Nicky ever get back together? Will anyone have any respect for Baz? And when will Javier show up again? Find out on Animal Kingdom, Tuesday’s at 9pm on TNT.