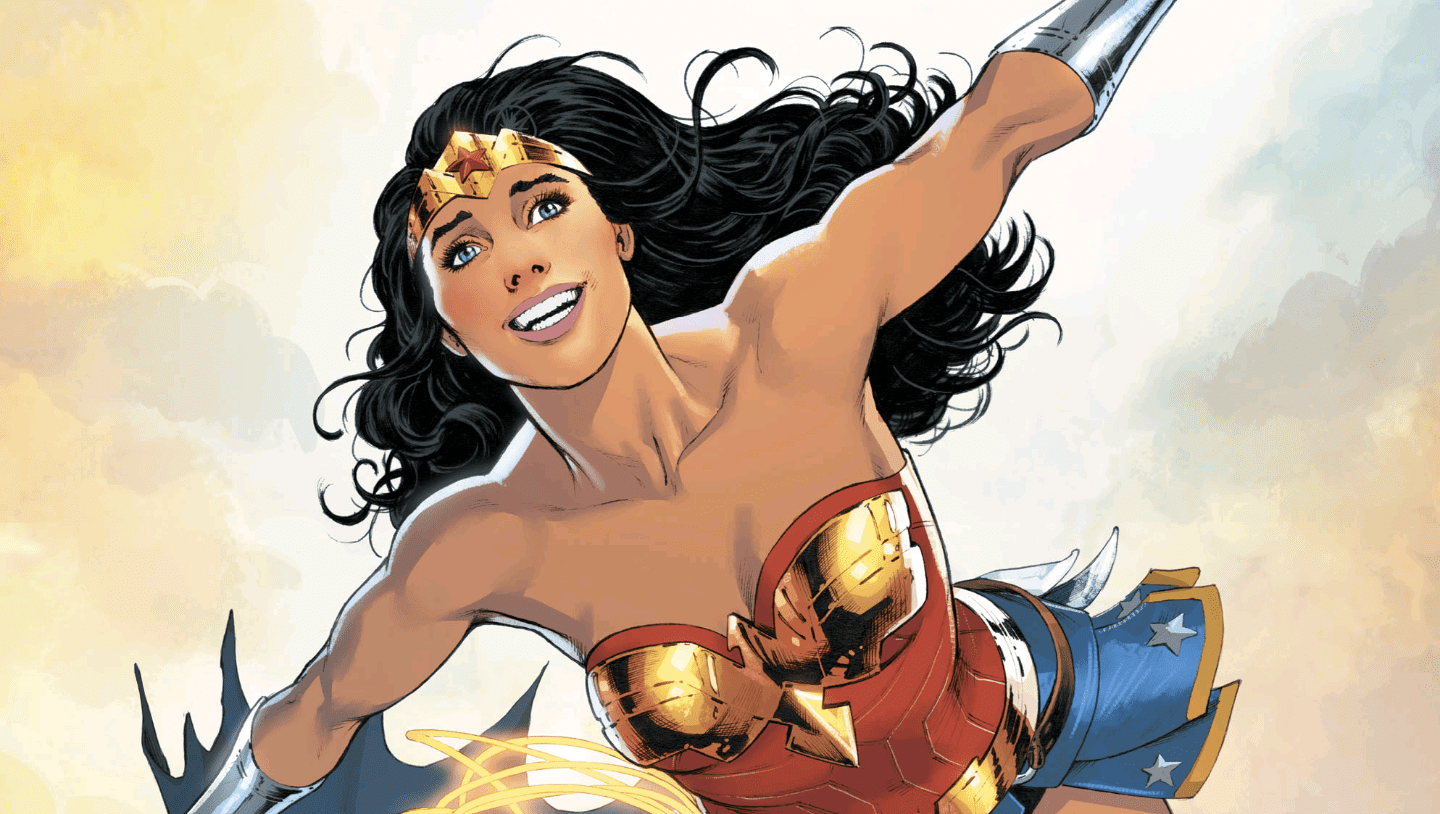 As another way to celebrate the release of the Wonder Woman film, I wanted to draw attention to the magnificent Wonder Woman Annual that was released this Wednesday. I admit that I usually skip over annuals, especially when they diverge from the current arc I am usually invested in. But with “The Truth” having ended, and the movie just days away, I eagerly snatched it up.

There are four small stories in this issue, and all of them are great. But the first and the last will almost certainly leave you with a smile on your face. 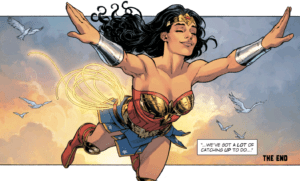 The first is a cute story by Greg Rucka, which covers Diana’s first meeting with Bruce and Clark in the Rebirth continuity. It is short and simple: they both come to investigate her, she finds them, and the three communicate using the Lasso of Truth. She sees into their hearts, and they see into hers. They both see that she is a genuine hero, but Bruce admits that the goodness in her heart surpasses both men. “And Then There Were Three” also brings back Nicola Scott, who I have dearly missed since she left the series. As I said, it is short, but it’s a great first meeting of DC’s Trinity.

The second story is called “In Defense of Truth and Justice”, written by Vita Avala and illustrated by Claire Roe and Jordie Bellaire. In it, Diana comes to the defense of King Shark when he is set to be executed for a crime he didn’t commit. While it gives Wonder Woman a chance to show off her fighting prowess, it once again shows how committed she is to justice. King Shark has committed several crimes, but not this one. Which means he should not be punished for it.

The third, “The Curse and the Honor”, by Michael Moreci and 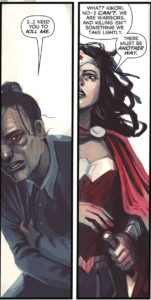 Stephanie Hans, has Wonder Woman forced to bring another warrior peace through death. Diana loves a good fight, but she always fights with honor. Moreci makes it clear that this incarnation of Diana will not kill if there is another way. She wants to save as many lives as she can. Unfortunately, there are times when it’s impossible to save everyone. Of the four stories, this is the only one where Diana seems to ‘fail’. This was not my favorite of the four, but I loved Hans’s beautiful painterly style. This, and the more somber storyline, helped set it apart from the other three.

The fourth, however, was my absolute favorite. I read it several times simply because it made me smile so wide. “The Last Kaiju” by Collin Kelly and Jackson Lanzing is simply too adorable. Diana seeks to understand others, even her enemies. She is also willing to find common ground—to communicate. Even if that enemy is an enormous kaiju! David Lafuente and John Rauch pair up on a wonderful illustration of a strange, budding friendship.

Diana is one of my favorite superheroes, there’s no denying that. All four teams on this book show portray her the way she should always be portrayed: someone who values truth, honor, and love.