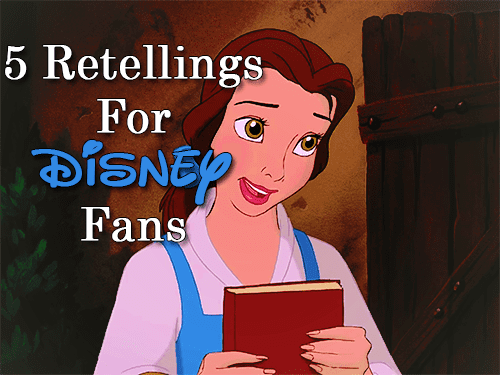 Fairytale retellings are a huge thing, rampantly popular in the literary world and outside it. But the best, most (arguably, universally) beloved retellings come from Walt Disney Studios. They’ve put a (family-friendly) spin on even the darkest fairytales, turning them into whimsical stories. Stories chock-full of likeable hero(in)es, daring adventure, flights of fancy, wisecracking sidekicks, and catchy songs that enhance the plot. When you settle into watching a Disney film— whether it’s Aladdin (based on The Thousand And One Nights), The Lion King (which heavily relies on Shakespeare’s Hamlet), or The Little Mermaid (based on the Hans Christian Andersen tale, inspired by the author’s own star-crossed love story)— you’re accepting the retelling, and probably (probably) loving it more than its original incarnation (who doesn’t love happy endings?).

The numbers for the Disney-helmed live-action remakes of their own animated classics back up their bragging rights. Cinderella and Maleficent made serious bank, and now, Disney’s live-action Beauty and the Beast continues to climb, breaking box office records. But if you’re seriously into Disney, box-office darlings and numerous rewatchings of old favourites are just the tip of the iceberg: there are books by modern authors— retellings of classic tales that are, no doubt, influenced by that proverbial Disney magic— you’ll want to read. We’ve put together a list of five of our favourites (with gifs! Everyone loves gifs!)

Author Jessica Khoury has put a definite twist on the Aladdin mythos with her 2016 novel. When Aladdin finds the lamp, out pops Zahra, a female Jinni who, in fact, is the most powerful of her kind. Her magic, and her very existence, are illegal, so until Aladdin makes his three wishes, Zahra must use her forbidden gifts to keep herself safe. Well, that was the plan, until her freedom is dangled on a string by the King of the Jinn. Of course, by that point, Zahra has realized she has feelings for Aladdin— did you see that coming? We totally didn’t— all magic comes with a price, and she must decide which she’s willing to sacrifice: her heart, or her freedom. Despite what Goodreads says, it’s actually a standalone novel (there’s a short story up on Wattpad that enhances the mythos, but it’s not necessary to read the book).

4) The Looking Glass Wars by Frank Beddor (Alice in Wonderland)

Lewis Carroll (real name: Charles Dodgson) struck gold when the first manuscript of his classic— then known as Alice’s Adventures Underground— took shape. It’s unlikely that he knew what a wide-reaching, time-tested impact that Alice’s Adventures In Wonderland, then its sequel,  Through The Looking-Glass, and What Alice Found There, would have on audiences. Disney made it into a movie in 1951, solidifying a fanbase for years to come. There are many retellings of Alice, though perhaps none so controversial as The Looking Glass Wars trilogy by Frank Beddor. The Looking Glass Wars reimagines Alice as Alyss Hart, heiress to the Queendom of Wonderland. When her evil aunt Redd attacks, Alyss’s mother uses a looking glass mirror to send her to Earth, where she meets Lewis Carroll and tries, desperately, to tell him her story. Carroll interprets it as the manuscript for Alice’s Adventures Underground, but the Princess of Wonderland is determined to make it back home and battle her evil aunt Redd for the throne. Perhaps the thing readers found most annoying (aside from the great liberties Beddor took with the source material) is how Carroll himself is portrayed: bumbling and weak-minded. Certainly not the person fans expect (or want) the original author of Alice to be. Regardless, Beddor’s thorough reimagining of all things Wonderland pays off, becoming an action-packed, fantastical adventure that’s able to stand on its own. The other two books, Seeing Redd and ArchEnemy, complete the trilogy.

3) Hunted by Meagan Spooner (Beauty and the Beast)

There’s an On The Shelf column about this book, so you’re probably not surprised to see it listed. This brand new Beauty and the Beast retelling is a credit to everything great about the Disney movie, adding layers and twisting certain things, making it the perfect marriage of old and new. Hunted’s beauty, Yeva, is the daughter of a merchant/former huntsman. He gave up the woods to marry Yeva’s mother, but after a financial disaster, Yeva’s family is forced to abandon society and retreat to their father’s old hunting cabin until— if— they can pay off their debts. But Yeva’s father soon becomes maddened by the idea that something supernatural is watching him (spoiler alert: it totally is). When he doesn’t come back from the woods one morning, Yeva sets out after him, and finds that— oh, crap— her dad wasn’t losing his mind as she had feared, there’s actually a ruthless, hairy, talking beast in the woods— and he takes her prisoner in the hope that a hero will come to rescue her. But Yeva, much like Disney’s Belle, isn’t a damsel who’s content to sit on her hands: weakened and sick, she’s unable to escape right away, but she does manage to hold her own, and fight for what she believes in. Hunted is a carefully-unfurling fantasy with a slow-burn romance. Spooner has done a wonderful job with these characters, and proves that whatever comes next, it will probably rock our world. Spooner has said that Hunted is a standalone novel, even though Goodreads lists it as the first in a series.

Every child knows the story of Peter Pan, the boy who will never grow up. Inspired by a band of brothers (particularly the second youngest, Michael Llewelyn Davies) author J.M. Barrie knew in real life, there have been multiple Peter Pan retellings throughout the years (from 1991’s Hook, starring Robin Williams, to 2015’s gut-droppingly disappointing Pan. A slew of novels have also used Peter Pan, Neverland, and Captain Hook, as characters, including The Neverland Wars, Unhooked, Tiger Lily, and Never Ever). The Child Thief by Brom is one of the many modernized versions of the boy who would never grow up, but it’s also, definitely, one of the creepiest (second place goes to Never Ever, for making Peter— Phinn— a complete piece of garbage). In The Child Thief, Peter is a bloodthirsty boy, recruiting child soldiers for his war in a desolate, immortal place that is definitely not Disney’s Neverland. Here, The Lost Boys have become The Devils, a group of feral children, and Peter is a societal castoff who can seamlessly move between one world and the next, gathering up children to use as pawns in his violent game.

Yeah, we already have one Beauty and the Beast retelling on this list, but have you seen the new movie? It. Was. Ridiculously amazing. We could probably spend days talking about our favourite Beauty and the Beast retellings, but this is definitely a good one. The seventh novel in Lackey’s Five Hundred Kingdoms series, it can be read and appreciated on its own. Isabella Beauchamp, “Bella” is the story’s beauty. She’s the eldest daughter of a merchant, and she knows that, in fairytales, the eldest child is often tied to some horrible doom-and-gloom fate, which she intends to take preventative action against by doing everything in her power not to be typical. In order to do this, Bella dons a red cloak and ventures into the forest (this is where it becomes a mashup retelling of Beauty and the Beast and Little Red Riding Hood), where she’s attacked by a vicious beast— who turns out to be a cursed nobleman. By day, he’s a mild-mannered, kind-hearted wizard; by night, he’s a hideous monster with poor impulse control and violent desires— but Bella is determined to break the curse, save the nobleman, and choose her own destiny.

So, there you have it! A list of retellings every Disney fan should check out. What are some of your favourites? Let us know in the comments!