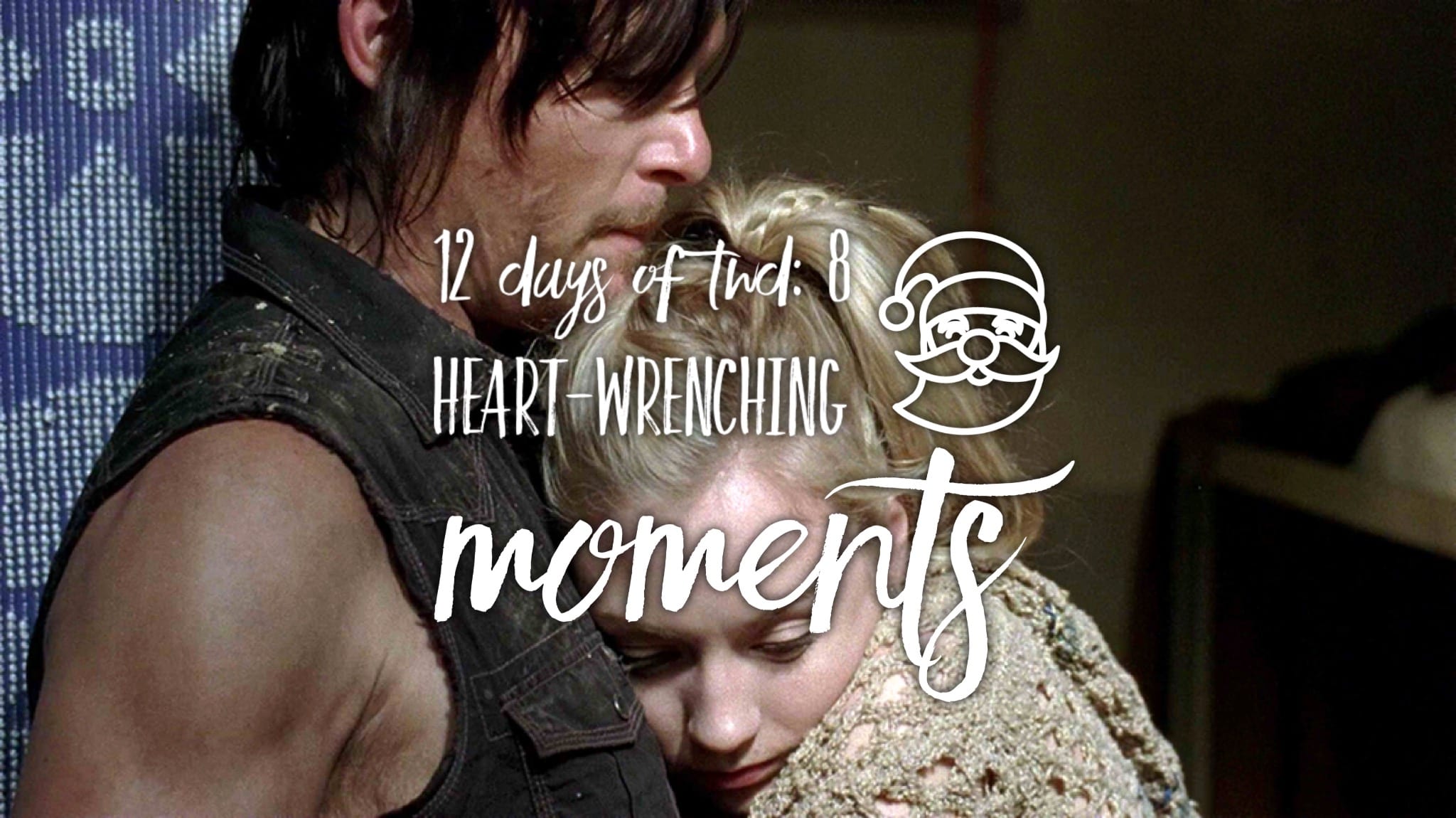 Some of the most heart-wrenching and tear jerking moments in television have been brought to us by The Walking Dead. It should come as no surprise that a show about the zombie apocalypse would evoke some serious emotions in its viewers, but when most people think zombie television or film they think blood, gore, and brains. When it comes to TWD, it’s a lot of substance, heart, and real human emotion – plus all the other stuff too. It’s just more real.

There are the obvious emotional moments like favorite character deaths and the loss that their loved ones deal with after, but there are also the moments of confusion, pain, and fear that have made fans so addicted to the series. It’s easy to find bits and pieces of ourselves in the characters we watch on Sunday evenings.

There are also the happy moments, the ones where we watch our favorite characters get an upper hand. They win, they overcome, they let down their walls, and they prosper just enough to find the drive to make it another day.

From Beth and Daryl bonding to the loss of Glenn and Abraham and even the birth of Judith; we’ve compiled 8 of our most emotionally charged moments from the series this far.

‘Look at the flowers’.

We all read the book in high school, you know the one, Of Mice and Men where George kills Lennie when he tells him about the rabbits. It was heartbreaking, seriously, it’s hard to even think about without tearing up. So when TWD did their own spin on the scene when Carol killed Lizzie after telling her to look at the flowers – we were heartbroken all over again. The scene is horrible, there’s really no way around it, but the set up is even more tragic. Lizzie was helping walkers and after killing her own sister, Carol had to stop her before she got to Judith too. Adults have it hard enough trying to find peace in the world of the apocalypse, but the kids, their stories are even more fragile.

Rick’s speech about no longer being in control.

A broken Rick is something that was not only unexpected but absolutely heartbreaking. No matter what had happened to the group before, he always managed to hold on to his strength; however, after crossing paths with Negan – he became the shell of the man he used to be. He lived and breathed all things compliance. He was no longer a man of free-will. He existed to scout, scavenge, and follow every order and whim Negan threw at him. It was one of the hardest character progressions to watch in the series so far. We’re so glad that’s over.

Bringing new life into a world that’s broken takes some strength. It’s a decision one makes in hopes that the world will one day make sense again, and when Judith came along, the group sort of got a new light about themselves. It was almost like they had, even if it was the tiniest amount, a small glimmer of hope in which they could just believe in something bigger than themselves again. Another part of what made her birth so emotional was the strength it took for Rick to do everything in his will to protect her, and to be her father.

The episode where Beth broke down Daryl’s walls.

Daryl was an absolute bad ass when he first met the group, and while that bad ass still remains; he’s also added another facet to his personality – he’s actually really soft at heart. One of the major ways in which his character really opened up was when he and Beth bonded so closely. There was moonshine, peach schnapps, tears, and a really upfront Beth that all played a role in breaking Daryl’s walls down, but once it happened, we were all able to see him in a new way. Daryl was able to see himself in a new way too; it was almost as if he finally felt that he was truly deserving of love, not just from other people, but self-love too.

We already did our list of most heartbreaking deaths, and both of these guys were included, but the loss of the characters has been more traumatic than the deaths themselves. Not only has Eugene been turned into a shell of a man, fear all over his face, but the entire group fell apart and have been trying to find their own ways back to the people they were before. It’s been so hard to watch! It’s a testament to how important both of the characters were to the family and how their absence is going to be felt through the entire series.  To add insult to our own injuries, it’s also incredibly painful to think about Glenn’s last words to Maggie and Abraham’s last gesture to Sasha. They deserved better.

Jesus calling the others ‘his family’.

Okay, so taking a break from the incredibly sad moments, this one brought us to tears in a good way. When Jesus is at the hilltop with Sasha and Maggie and Gregory tries to sell them out and make them leave, Jesus stands up for the people he’s grown to care about and tells Gregory that the game has changed. The cards are no longer in his hands and one day, he won’t be of power at all anymore. While Jesus won’t be the one to take over, he is the one that says what will become of them all, and it warmed our hearts right up. ““We’re all going to be one big, happy, dysfunctional family”. Jesus may have joined the bunch in a rather unconventional way, he’s become such a core part of the family that we can’t imagine the series without him now.

Dwight taunting Daryl with ‘the’ photo.

Honestly, was any episode of this show more difficult to watch than ‘The Cell’? Aside from ‘The Day Will Come Where You Won’t Be’, we think not. Not only was hearing ‘Easy Street’ over and over and over and over absolutely traumatizing, seeing Daryl be so broken, be stripped of everything that made him who he was (in his own eyes), made us all want to cry. He’d come so far in the series, letting his walls down, allowing himself to care about others, considering himself worthy of being part of the family. Then Negan threw him in a dark cell without clothes, light, or proper nourishment and tried to break him. To add insult to injury, Dwight threw a photo of…Glenn…into the cell with him one afternoon and poured salt on the wound that Daryl carried, blaming himself for Glenn’s death. We still haven’t fully recovered.

While fans long speculated or rather knew, that Judith wasn’t Rick’s daughter, it wasn’t something he ever openly spoke about. That is, until recently. During a moment of honesty and openness with Michonne, Rick finally said that Judith wasn’t his daughter and brought back the painful memories of Shane and Lori. He played a role that he knew would help him keep Judith alive, putting his own pride aside to protect this new life, and it’s something he’s never stopped doing. The moment, the look in his eyes and Michonne’s reaction makes it one of the most emotional scenes in the series so far.
Now that we’ve all been sufficiently put into our feelings, and on top of that realized there’s no new episode to look forward to this evening, will you be rematching one of the episodes with these heart-wrenching moments? Let us know!