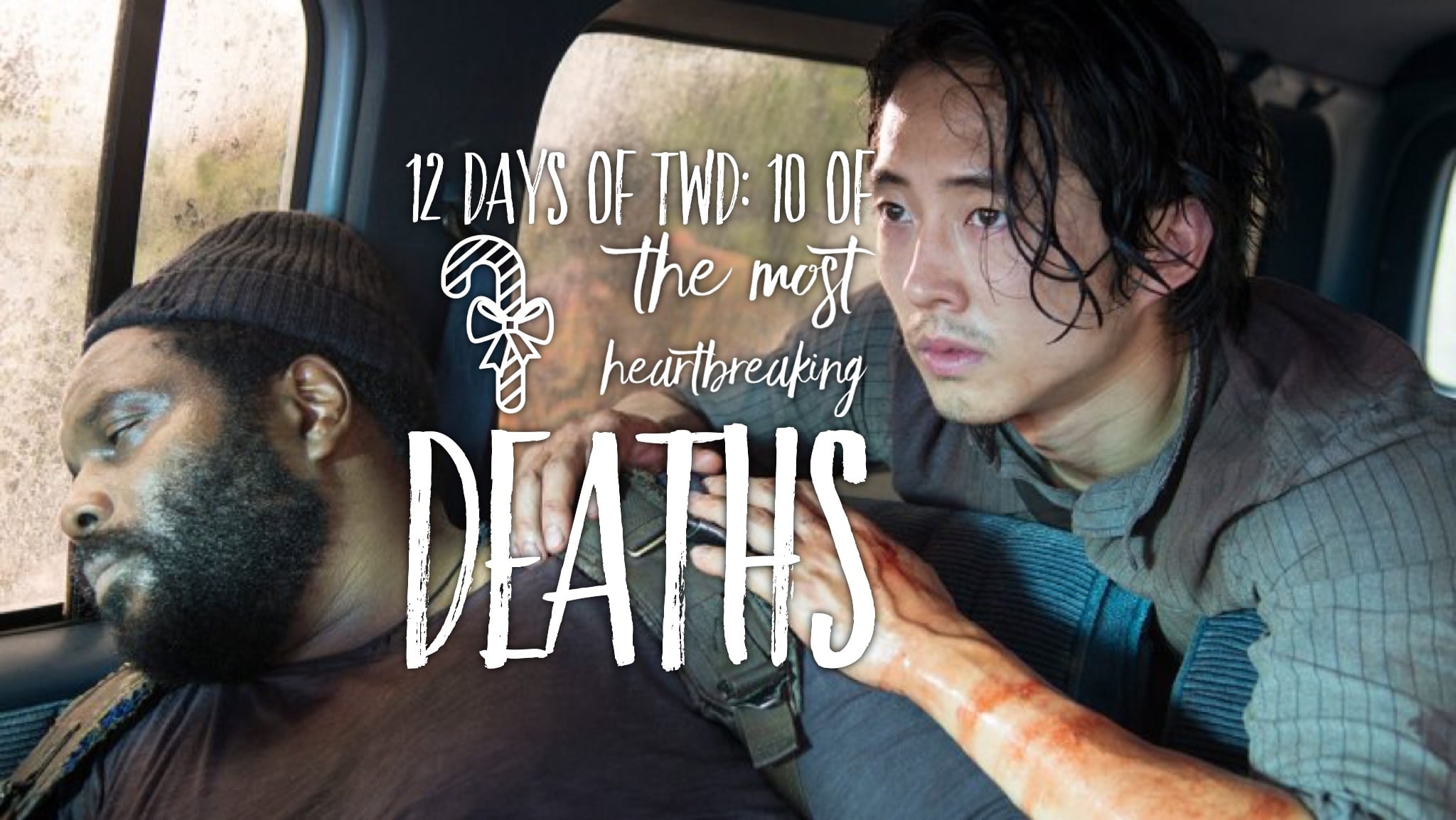 We know this time of year is the season to be jolly and all that, but The Walking Dead is a show about the zombie apocalypse so…there are going to be deaths, and they’re going to be heartbreaking. There’s just no way around it. While some of the deaths on the show have been sort of easy to shrug off – not everyone has been easy to love – most of them really stung, and still do.

Some of those deaths that hurt are worse than others, depending on who you ask. When it comes down to it, when everyone looks at the series, they can pick out a handful of deaths that were the hardest on them; these are ours.

Lori was a character that most viewers had a love-hate relationship with. She hurt Rick, more than once, and seemed to be the reason for a lot of drama within the group. She sort of played the hand that was most popular at the time to benefit herself, but – she was a mother, and a friend, and her loss was tragic in a way the other’s weren’t. Dying in childbirth with the sad last words she spoke to Carl, will always be an incredibly sad scene. “If it feels easy don’t do it, don’t let the world spoil you. You’re so good. My sweet boy. Best thing I ever did.”

Dale was sort of the moral compass of the show during his time in the series. He knew that the world around him was dark and full of destruction and agony, but he didn’t think that meant that the people who were surviving had to give into it. He was smart, he was outspoken, and he was incredibly caring. He had a soft spot in his heart after his wife died (pre-zombie apocalypse) and he first met Andrea and Amy who he cared for as if they were his own family.  His death left a hole in the group and during episodes even now, you have to wonder what would have been different if he’d survived.

Sophia, Carol’s daughter, wasn’t the most focused on character of the show by any means, but she was the one thing that Carol really loved. She brought a life into Carol’s eyes that she didn’t have with anyone or anything else and once she went missing, Carol changed into a more hollow version of herself. In fact, Sophia’s death is easily a big part of why Carol is the woman that she is now, she’s never fully recovered. Once Carol saw Sophia as a zombie as the walkers were let out of Hershel’s barn, she breaks down even further, and Sophia is then killed by Rick.

T-Dog died heroically, and if you look at his character, lived the same way. He put people ahead of himself at every chance he got; in fact, that’s what ultimately led to his death. After being bitten by a zombie, he sacrificed himself which allowed for Carol to continue living. He carried weight on his shoulders and you could tell life wasn’t always kind to him, but that didn’t stop him from being nice anyway; he just had a positive spirit. His death was unkind but it wasn’t a reflection of the life that he lived. Glenn later said that T-Dog saved his life many times, he’s looked back upon as a hero – which he deserves.

Noah’s death, aside from Glenn and Abraham’s, was the most graphic in the series and almost made you feel the hurt at home. He carried knowledge and a sense of honor with him when he first joined the series in the hospital while forming a friendship with Beth, and that carried on when he became part of the group after he realized that his home in Virginia was gone. He brought a sense of humor and the right amount of sarcasm, he was a force to be reckoned with. His time on the series was short, but he left a lasting impression.

Beth’s death was perhaps one of the most painful to watch; for the terrible way her life was taken to the way that the people who loved her broke down after learning of her death. She was young and she was smart, she knew pain but she also still had a vibrancy about her. She broke down some of Daryl’s walls, she made an impact on everyone she met, and she was a breath of fresh air in the middle of a world taken over by the undead. She fought until the end, which may have ultimately led to her death, but she died with honor.

Tyreese was a hero in his own right; from following his instincts and trusting people – even in a world that says trust is a lie – to sticking up for what was right even if it meant going against what people wanted him to do. He had a heavy heart from the beginning, learning from an early age that life wasn’t always fair, and in some cases, it seemed to just kick him when he was down. He stuck to his guns, he saved Judith, and in being the kind heart that he was – his life was ultimately taken when he was showing kindness to Noah. He spent his last moments being a friend to Noah, which is fitting, as he was a friend to everyone. Turn it off were his last words, and while it was said towards a hallucination, he definitely meant it towards all of the ugly and unkind that was left.

It’s still hard to talk about Hershel’s death; he was the grandpa of the group, the one everyone could confide in, the bit of softness left. He carried compassion with him in glory, unashamedly, and even in a world that most people would feel wasn’t worth trying in; he tried, he tried to keep people together, to keep people safe, to save lives, and in the process, he was willing to risk his own. Hershel died at the hands of a sociopath, but every moment of the time he spent with the group ensured that he would live on through them. Especially in Maggie.

Abraham’s character was rough around the edges, confident where others lacked it, but soft and kind in a way that he tried to hide; but failed at. He was a leader and a friend and somehow became the glue of the group in a way. You looked for him in places that he wasn’t before, you waited for his snarky remarks and witty banter, and you miss him now – we all do. He stood up to Negan, and his death was on his terms, in as much of a way as it could be, which was the right way – if he had to go – for his story to end.

The end of Glenn’s story was the end of a little bit of light, hope, and spirit of the group. It’s the death we saw coming but didn’t want to face. Losing Glenn was incredibly difficult for everyone in the group; his wife Maggie who is carrying his child, Daryl who feels as if he’s to blame, everyone else who looked to him for a sense of righteousness left. His death leaves an indescribable absence, and always will. There will always be pieces of Glenn in the other characters, in the heart of Maggie, and in the eyes of the child that will bring a bit of his hope back.

At the mid-season finale, two more lives were taken and after losing Glenn and Abraham earlier this season as well; the group all getting back together and seemingly getting their fire back is a relief for fans of the series. Perhaps it’ll be a while before we have to add another name to our list of heartbreaking deaths, we’re crossing our fingers.