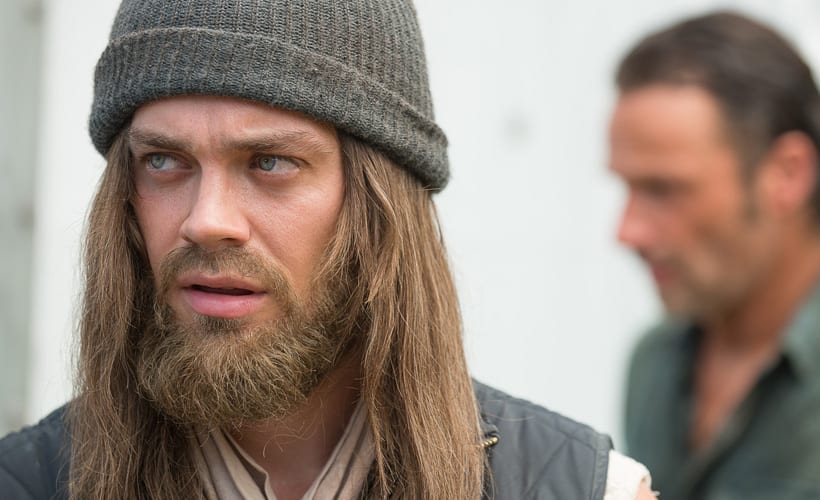 Tom Payne’s character Paul Rovia, aka Jesus, is first welcomed to The Walking Dead‘s family in season 6 as he runs into Rick and Daryl at an abandoned building while the pair is searching for supplies.  He tells them a story of desperation as he is on the run from walkers and for a moment, they let their guards down which they find themselves regretting just moments later.  After the three hear noises which they assume are gun shots they run to investigate but find firecrackers instead; it’s then that they realize Jesus was up to something and run around front to find him escaping with their truck full of supplies.

From the first moment he steals the scene, Jesus’ character is charismatic and almost humorous as he embraces his larger than life personality, but when Tom talks about season 7, he can’t find hint of humor in the situation.

“Unfortunately I think a lot of people who are wishing for the death and wishing that they had seen it, I think after the first episode they might wish they hadn’t wished for it because it’s going to be very brutal and a huge downer.”

At this point, we’re all expecting total and complete devastation when season 7 makes it’s return in a few short weeks but hearing the cast members be totally gutted by the loss and what it means for the group only makes our nervous anticipation worse.  This loss is going to absolutely change everything and it’s going to kick that change off with a horrific bang.

“The beginning of next season is going to be very tough and pretty graphic and horrible, but it sets up the whole season, it’s the beginning of the whole next story, it sets up Negan, this awful, awful person and the things that he is capable of doing. That sets up the challenge for season seven and I recognise you probably could have done that at the end of season six but I think it’s going to be a really great opener.”

Tom, like the rest of us, obviously had a moment of ‘I wish this had been done at the end of season 6’ but then recognized that the rehashing of the terrible season closing is necessary for fans to feel the true weight and horror of the death of the beloved character.  If fans had months to deal with the character loss and find ways to cope with it, season 7 might have started off differently, been less poignant and pointed, and with a character like Negan coming in to play, emotions need to be at an all time high.

He also embraced the topic of Jesus becoming a regular character on the series and what that might mean for the future of the group, how his way of operation could be very helpful when dealing with what the future holds for the group as they make their way to The Kingdom and navigate their new life within it.

“Rick’s group reached a point where they were quite desperate and considered the world to be a certain way and how you had to operate within it. I think Jesus operates in that world in a separate way, which could be beneficial to their situation.”

It is comforting to know, in a way, that the members of the cast are allowing themselves to look forward to the future of their characters and to wonder what they may bring to the newly set table as season 7 progresses.  It’s a light in what will inevitably be a dark death and very painful time following it.

Season 7 of The Walking Dead returns to AMC on October 23rd at 9/8c.