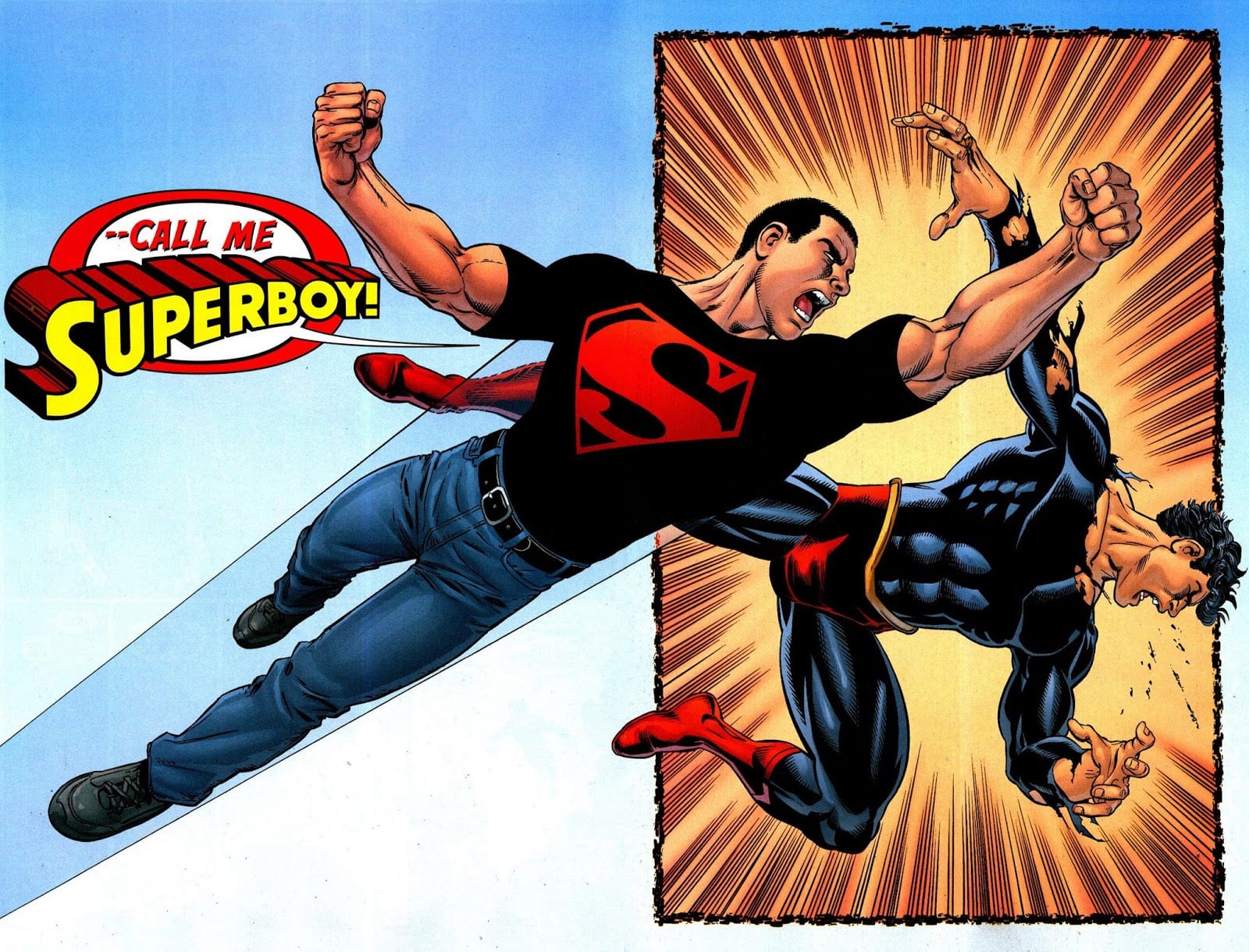 Last time I covered the earlier versions of Superboy with volume one being about the Superboy named Kal-El who debuted in 1946 in Adventure Comics and eventually his own series. He became the sixth DC superhero to receive his own comic book when Superboy #1 debuted in March of 1949. The series became the first new DC superhero title to have success since World War II. This title ran until its cancellation in 1987. Volume two named Superboy: The Comic Book was based on the TV series Superboy (the TV show ran from 1988 to 1992). The comic book run was from 1990 to 1992. This series explored unseen events in print that the TV series did not. 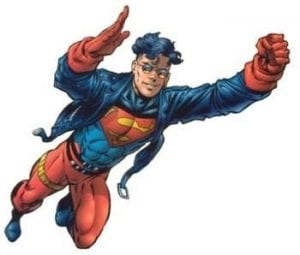 Volume three tells the story of the Superboy known as Kon-El, who debuted in 1993 during the Return of Superman storyline. Created by writer Karl Kesel and artist Tom Grummett, Kon debuted in his own series in February of 1994. Created at the hands of Cadmus as a clone of Superman and much later we learn he has Lex Luthor’s DNA within him too. After twelve failed attempts, the clone known as Experiment 13 (luck 13 baby), was grown from a single cell to a teenage boy in less than a week. The clone was given implanted memories and underwent an artificial maturation process intended to match the age of the original Superman. This clone was released from his cloning tube too early and emerged as a teenager. While at first calling himself “Superman,” he would later be known as Superboy. Superman gave him the Kryptonian name Kon-El, making him a member of the El family.

Ranked as the 196th greatest comic book character of all time by Wizard Magazine. IGN also ranked Superboy as the 83rd greatest comic book hero of all time, stating, “This genetic clone of Superman and Lex Luthor often bears the weight of the world on his burly shoulders. But over the years he’s managed to carve his own legacy and win a large legion of fans.”  In 2013, Comics Alliance ranked Superboy as #35 on their list of the “50 Sexiest Male Characters in Comics.” Not bad for a clone eh? 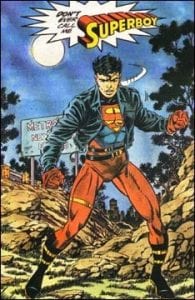 This “Superboy” was very unique because of his special powers that Superman did not have: Tactile Telekinesis (psychic ability allowing a person to influence a physical system without physical interaction). Oh, he also had Kryptonian powers too. Kon moved to Hawaii becoming their resident superhero for four years. The finale of the series had Superboy moving to an apartment in Metropolis and getting a job as a building superintendent. This series ran for 100 issues before being canceled in 2002. In 1998, he became a founding member of the Young Justice team.  In 2003, he joined the Teen Titans and remained a member up to that comic’s cancellation at issue 100 just in time for the New 52 universe to commence. 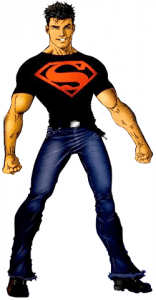 During Superboy’s first adventures with the Teen Titans, his Kryptonian powers start to manifest. In a battle with Jericho, Superboy’s body gets possessed by him and Jericho was able to exhibit heat vision and other Superman-like powers. At first Superboy seems to have a hard time controlling his powers but he soon adjusts. Later, during Wonder Girl and Conner’s first date, Superboy is forcibly sucked through a time portal to the 31st century. 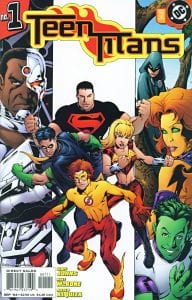 When Superboy reappears, he is wearing the classic Superboy outfit (with a Legion belt buckle). It’s revealed that he was transported to the 31st century, and fought alongside the Legion of Super-Heroes. After enlisting other Titans to join him alongside the Legion to combat a new threat, the team attempts to return back to the present.

After encountering dark reflections of themselves from a possible future, the Titans make it back to the present to contemplate what they’ve just seen. Not long afterward, Lex Luthor is able to co-opt Conner to reach his “full potential,” which results in a brutal, mind-controlled attack by Superboy that levels the Titans. His mind is eventually restored, and he is horrified at what he’s done to his team and friends. Afterwards, Conner takes a leave of absence from the Titans and secludes himself in the Kent’s home. He is unsure as to whether or not, being a clone, he even has a soul. There, Raven shows him that he had a young soul that was stronger than his inner demons and steadily growing. 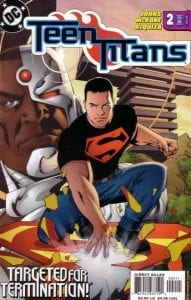 During Teen Titans, Superboy developed Kryptonian powers including heat vision, x-ray vision,and super-hearing. He also developed Kryptonian invulnerability and super strength, as shown when he battled the hugely powerful Superboy-Prime and even managed to damage him with some of his blows, when some characters such as Black Adam could not. When the Titans encountered their future selves, he found his future self had greater telekinetic abilities (no longer limited to tactile telekinesis), was stronger, more durable, and faster. Superboy later states that he has developed telescopic vision and eventually figures out how to use his freeze breath. It has also been shown in Teen Titans that he is much faster, traveling from San Francisco to the Arctic in less than an hour whilst carrying Nightwing. Superboy, like Superman, derives his Kryptonian powers from the absorption of solar energy from the Earth’s yellow sun, and he is as vulnerable to Kryptonite and magic. 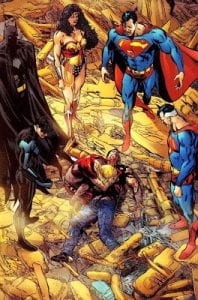 Now we go to 2006 in the Infinite Crisis storyline: Superboy, at this time a member of the Teen Titans, dies a heroic death sacrificing his life by crashing into and exploding Alexander Luthor’s multiverse tower, thwarting the plans of Luthor and Superboy Prime. Superboy Prime is from a parallel Earth called Earth-Prime that had no superheroes. There on that “Earth,” comic superheroes were fictional characters. Kon was the underdog in his battle with Superboy Prime and you could see that no matter how bad he was getting beaten he kept coming back. I thought he was killed off from the ongoing legal dispute for the Superboy name by the Siegel family with DC Comics, but that was not true as stated later on by DC Comics’ Geoff Johns and Dan Didio. 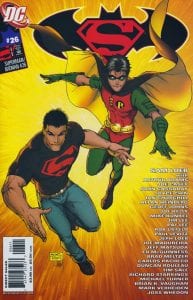 I read a few issues from 1993 to 2002 but, the stories never really pulled me in to stay faithful to the series until one writer that moved me the most and opened my eyes to the character was Sam Loeb. It was after I had read Superman\Batman issue 26 “The Boys Are Back in Town,” where Robin eulogizes his last adventure with our clone hero. This is when I actually became a big fan and I highly recommend this issue. The issue was to be Sam’s DC writing debut but, unfortunately, he passed before it was published. It was such a moving story as he captured the true essence of what camaraderie was between Tim Drake and Conner Kent. You could feel Robin’s pain as he reminisced about their last adventure to find the missing Toyman in Japan. Sam Loeb died at the age of 17 on June 17, 2005.