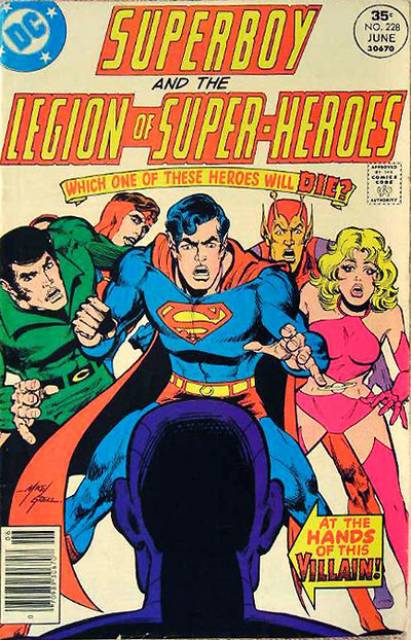 Its Wednesday! Which means its comic book day! So I decided to start giving little history lessons on everyone’s favorite superheroes. This week I’ll go through a retrospective on the history of Superboy during the Pre-52 era of DC comics. Now, there was of course more than one incarnation of this hero so lets delve into the first two Pre-52 Superboy’s from 1949 to 1992. Kon-El’s run, who is the Pre-52’s Superman clone, was published in two volumes from 1994 to 2011. The Superboy’s from the first two volumes are different versions and have nothing to do with Kon-El/Conner Kent. 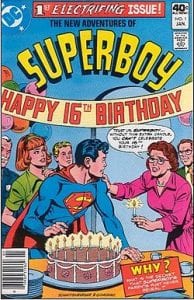 Volume one featured the Superboy named Kal-El who debuted in 1946 in Adventure Comics and eventually his own series. Superboy first appeared in More Fun Comics #101 (January/February 1945, published in late 1944). After just seven issues of More Fun Comics, the Superboy feature moved to the infamous Adventure Comics, where he debuted in issue #103 (1946) as the cover and lead feature. Three years later, Superboy became only the sixth DC superhero to receive his own comic book when his first issue, Superboy #1 debuted in 1949.

Superboy became the first new superhero title to succeed since World War II. This title ran until its cancellation in 1977. In this series we follow Kal-El as on his eighth birthday, Clark dons an indestructible costume woven by Martha from the Kryptonian blankets that accompanied him on his journey to Earth. He becomes the costumed hero Superboy, the first superhero of Earth-One. In Smallville, Superboy uses tunnels from the basement of the Kents’ house and general store to make quick, concealed exits when Superboy is needed. Superboy also maintains a secret lab in the basement of the Kent house, where he builds Superboy and Clark Kent robots to cover for himwhen he is busy elsewhere or otherwise unavailable. 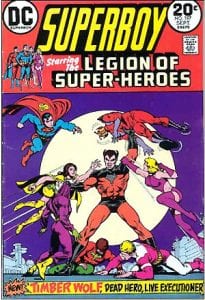 Superboy is the only superhero who has a well-known public profile until after he becomes Superman. Superboy’s solitary status is reduced somewhat when he is reunited with Krypto, infant Kal-El’s pet dog on Krypton. Krypto joins Superboy in many of his subsequent adventures as his canine partner, and also has many adventures of his own. Through his discovery of the Phantom Zone, Superboy later finds out he is not the only survivor of Krypton. Superboy’s last consecutive original story in Adventure Comics #315 (1963) ended a run of 213 original Superboy features in the series. Beginning with Superboy #197 (1973), the cover logo was changed to read Superboy starring the Legion of Super-Heroes, and the Legion, including Superboy, took the lead spot in the comic. 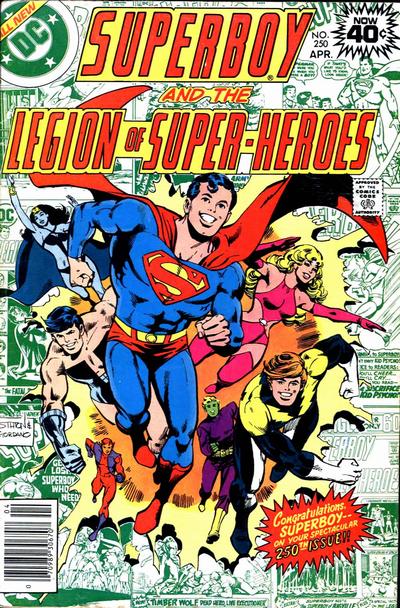 The Superboy backup in #197 was the last original Superboy feature to appear in his own title. With the next issue, Superboy became an exclusively Legion of Super-Heroes title, with Superboy appearing in every issue as a Legion member. The series title remained Superboy through #230 (1977), after which the series became Superboy and the Legion of Super-Heroes from #231-258. With Legion of Super-Heroes (vol. 2) #259 (1980), an issue in which Superboy leaves the Legion, Superboy’s name was ousted from the title altogether. Though he still sometimes appeared in the series that once bore his name, the series remained a Legion comic until its last issue, #354 (1987). This version would eventually become the Earth-One Superman who is now currently featured in DC Comics’ Rebirth series.

Volume two titled Superboy: The Comic Book was based on the TV series Superboy (the TV show ran from 1988 to 1992). The comic book run was from 1990 to 1992. This series explored unseen events in print that the TV series did not. About a college-age Superboy. Originally entitled Superboy (volume 2), the cover logo read Superboy: The Comic Book from #1–10. From issue No. 11, the series changed its cover title (as the TV show had done) to The Adventures of Superboy (although the comic book was not officially renamed under that title until issue #18). as well as displaying a short-white box next to the title (logo) which read “As Seen on TV.”

After 22 regular issues, the series concluded in a one-shot special published in 1992 that wrapped up adventures and stories from previous issues and depicted them as having been the daydreams of the young Post–Crisis Clark Kent.

Next week we will explore the history of Kon-El, the Superboy clone who debuted in 1993 during the Return of Superman series. 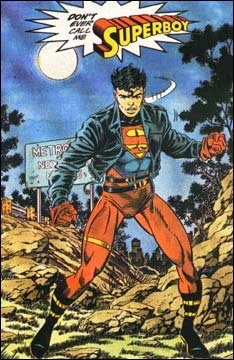