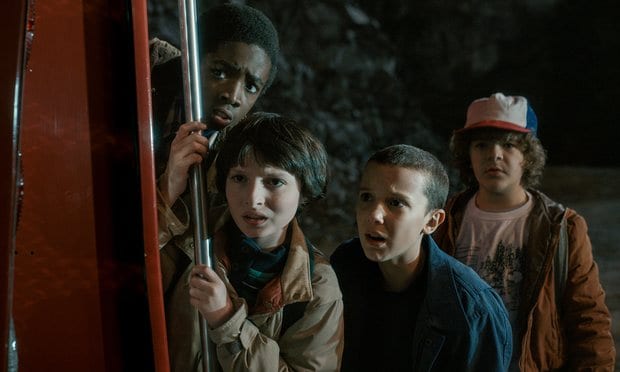 Warning: Potential Stranger Things spoilers ahead!  Read on at your own risk!

Stranger Things has got to be one of the best series we’ve seen in a long time.  The story and premise of the show in itself is fantastic and, add in the nostalgic 80’s vibe and we’ve absolutely been hooked!

The series hasn’t even been released for a full month and, yet viewers and binge watchers are craving more!  During the Television Critics Association’s press tour today, Netflix addressed the possibility of a second season but did not confirm definitely if the show would be continuing.  Netflix chief, Ted Sarandos said, ” We always want to take some time to be thoughtful on the process.  When we first come out of the gate with something, we have an idea where it’s going to go, but it’s sensible for us to let the show breathe.”

So, while Netflix isn’t officially onboard yet (though, we are sure they will be), series creators Matt and Ross Duffer already have ideas about what they want to explore in season 2.  In an interview with Entertainment Weekly, Matt Duffer said:

“We hint at where we might go at the end of the season.  Will was living in this Upside-Down, this other dimension, for about a week, so the repercussions of that can’t be good. [The] inter-dimensional rift is still very much open, so that also can’t be good… There’s a bigger mythology behind what happened. It’s open-ended in a way that if people wanted it, if Netflix wanted it, we could explore and continue this storyline.”

They go on to explain further that season 2 would be a true sequel but with a different feel than the first.  It’s not about recreating the magic of the first season but taking it further or darker as Matt Duffer explains:

“It’s going to have a different structure… We want to retain the tone, but all our favorite sequels feel a little different. It’s not about just taking another monster and it’s a bigger, badder monster. We want it to feel a little bit different, maybe a little bit darker, but still have the sense of fun that we had.”

The first season seemed to go by so quickly (maybe because I watched it over the course of two days.  Totally binged) but, watchers have really connected with the likeable characters and actors in the series.  If it were up to the Duffer brothers, season 2 will keep the same cast of characters, at least for the time-being.  Ross Duffer explains:

One important thing to note is, the Duffer brothers are completely aware of how quickly a series can “burn out” and its viewers can lose interest.  Matt Duffer explains:

“We’re TV fans.  There are shows you fall in love with and at a certain point they lose you. That’s my nightmare. ‘Stranger Things was really great the first two seasons and then I stopped watching it.’ That’s what I’m terrified of. The idea would be do it as long as it feels natural and organic to tell the story. When it feels like [we] should bring it to a close, I think Netflix would support that.”

So, if (or, actually, we are going to say when) Netflix does decide to renew the series, the Duffers have promised to work as fast as possible to bring the new season to life.  The first season was basically made available to the public the moment it was finished, no delay.  Ross Duffer explained they were still doing visual effects up until the last minute and, the series then went immediately onto Netflix for streaming viewing.

The response to the show has been amazing and, if you haven’t checked it out yet, head on over to Netflix and get ready for a nostalgic, creepy and fascinating trip into Stranger Things.