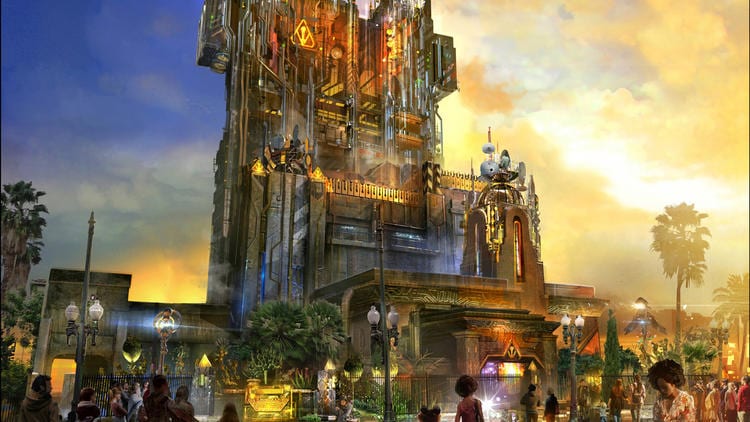 The speculation and hints began spreading earlier this year, and it is now official! Disney announced at San Diego Comic Con this weekend that The old Twilight Zone Tower of Terror at Disney California Adventure is being re-imained, galaxy style. Even better, the makeover will be done by the release of Guardians of The Galaxy 2 in May 2017!

The ride will be called Mission: Breakout, and will utilize the 2004 elevator bones of Tower of Terror and turn them into a visual and musical adventure.

Tower of Terror will close in January and concept art has shown the new look Disney has in mind. Part of it will be a safety fortress and museum featuring the Collector (Benicia del Toro) and his prized collection. Rocket Raccoon (Bradley Cooper) will be involved and help guests to break out of the museum. The 13-story drop is said to be remaining the same.
The ride designer Joe Rohde is working simultanesouly on the Avatar themed world at Disney’s Animal Kingdom in Orlando, Florida.

For those concerned, this only effects the Tower of Terror in California, as the one in Disney’s Hollywood Studios Florida will still remain!

This has also made us wonder, is this just the beginning of more Marvel at Disney? Universal owns the rights to Marvel characters in its theme parks though, and has already created many rides in multiple parks across the world.