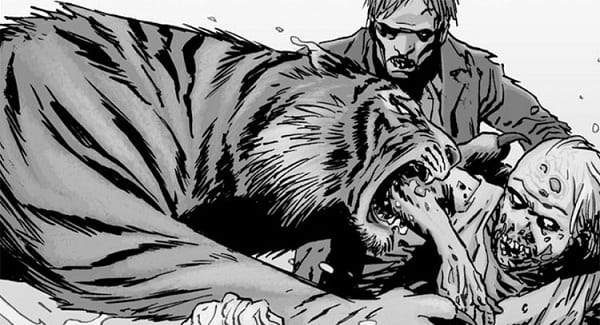 Beware of spoilers below.
Almost every season, we are introduced to new characters on The Walking Dead. When season 7 hits, we can expect so see a very special new character. He is strong and a fighter just like the rest of them, he just happens to have. . . stripes.

The tiger belongs to Ezekiel who is leader of The Kingdom, which we will most likely be introduced to as the season opens in the Fall. He was a zookeeper prior to the apocalypse and keeps his tiger, who on occasion helps him fight zombies like no human could.

Shiva who is reportedly a mixture of animatronics and CGI, will most likely be appearing in season 7, as well as Ezekiel for whom casting rumors have been flying.

Animal lovers, beware. Although the tiger is immune to the outbreak, he ends up making a very courageous move to protect his master in the comics.

Sources tell comicbook.com that there may even be a tiger at this year’s San Diego Comic Con.