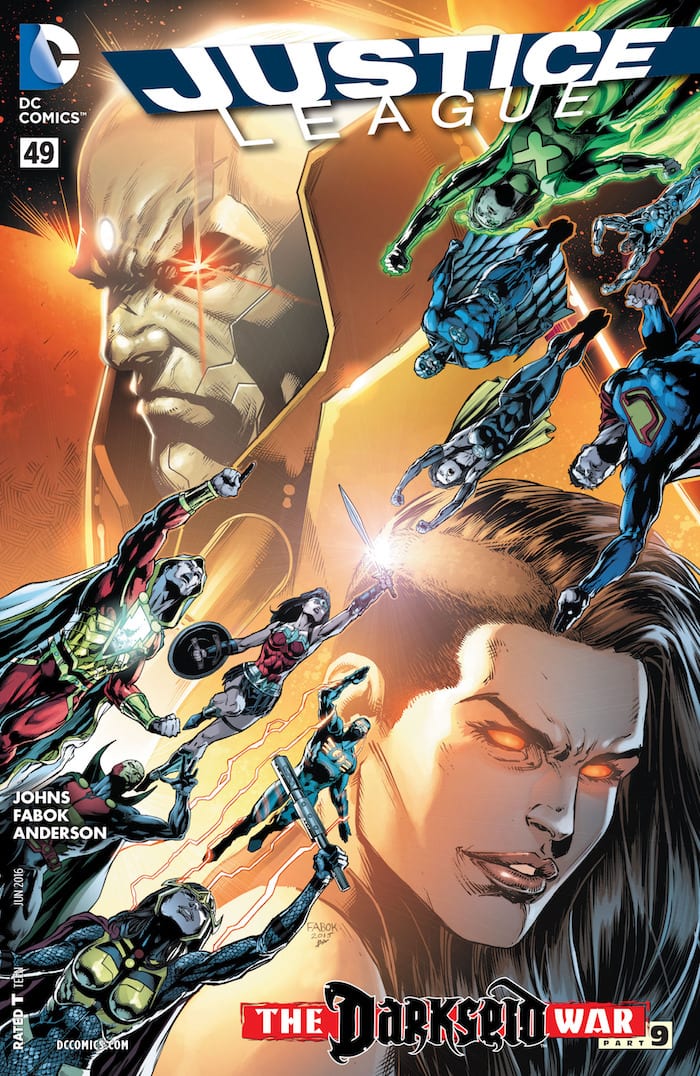 It’s a boy! And it’s the end of Mobius in Part 9 of the Darkseid war. Geoff Johns writes a penultimate chapter that brings us so much character development that it should’ve had 10 more pages added with all the twists and turns and one- upmanship going around between Grail, the Justice Gods, the League and the Crime Syndicate. Let’s just say by the end of this issue the Justice League does not have Mobius to worry about anymore as the “Darkseid War” takes an interesting twist. Who is the true villain here? The Crime Syndicate makes it clear to Wonder Woman that once Mobius is defeated they will kill all who stand in their way. Grail returns to kill Mobius and Big Barda heads back to Apokolips to free the slaves of Darkseid and bring freedom to her world.

By the end of the issue it’s all-out war as the league not only still has Darkseids’ daughter Grail to deal with but a newborn baby boy courtesy of Superwoman (Lois Lane of Earth-3) and her fellow Crime Syndicate team! Who is this child? Hopefully all will be answered in the final chapter. Jason Fabok’s art never disappoints. His detail on all characters never slips and each page is a masterpiece that makes us feel like the wait was worth it with all the delays between issues. I give this one 4 out of 5 stars! Issue 50 is just less than 30 days away!

The massive, 48-page conclusion to the critically-acclaimed “DARKSEID WAR” can hardly be contained between two covers! Don’t miss the final fates of the world’s greatest heroes and villains, along with world-changing revelations for Batman, Superman and Wonder Woman. It doesn’t get bigger than this as DC’s monthly super hero event comic sets the stage for the next year and beyond!