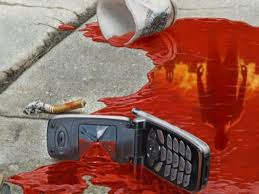 Saban Films has released the trailer for Cell, the latest cinematic adaption based on the book by Stephen King. Today we have our first look at this thriller, which shows how technology is turned against us in frightening ways. Cell stars John Cusack as Clay Riddell, a man in the midst of a technological apocalypse. At the Boston airport, Clay witnesses a scene of chaotic mayhem when an electronic signal turns hundreds of cell phone users into rabid killers. Desperate to find his estranged wife and son, Clay teams with a train driver named Tom McCourt (Samuel L. Jackson) to battle the horde of murderous “phoners” as the city descends into apocalyptic madness.

The first trailer, which debuted on Entertainment Tonight, reveals the lengths these strangers must go to, in order to survive this terrifying new
world. King himself adapted the screenplay alongside Adam Alleca, who previously penned the 2009 remake of Last House on the Left.

Cell will arrive on Video on Demand June 10th before arriving in theaters on July 8th.

Check out the Trailer Below!

Anyone else have the chills? I can’t wait for this thriller to hit the theaters!