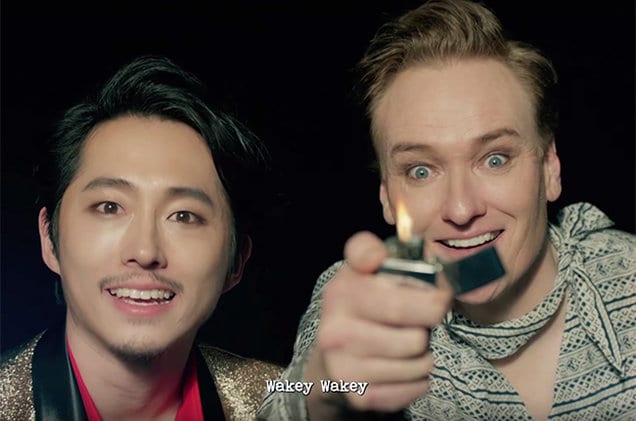 Steven Yeun has had some hilarious appearances on Conan in the past, including a trip to a korean spa that left both Yeun and Conan red and in pain.

This new venture is ten times more amazing. The two teamed up with J.Y. Park and some K-pop stars, the Wonder Girls and TWICE. Together they made this amazing video, and everyone should watch it.

Not only is the video well made and hilarious, but the song “Fire” is so catchy! The video features the duo learning how to “string dance”. Check out Steven’s dance moves, they are REALLY good.

Yeun also posted a selfie and short behind the scenes clip of him breaking it down during the production of the video! I can’t get over how well he can move!

BAHAHAHAHAHAHAHAHA! whole episode on: teamcoco.com
@teamcoco
A video posted by Steven Yeun (@steveyeun) on Apr 10, 2016 at 3:18am

What do you think of the video?