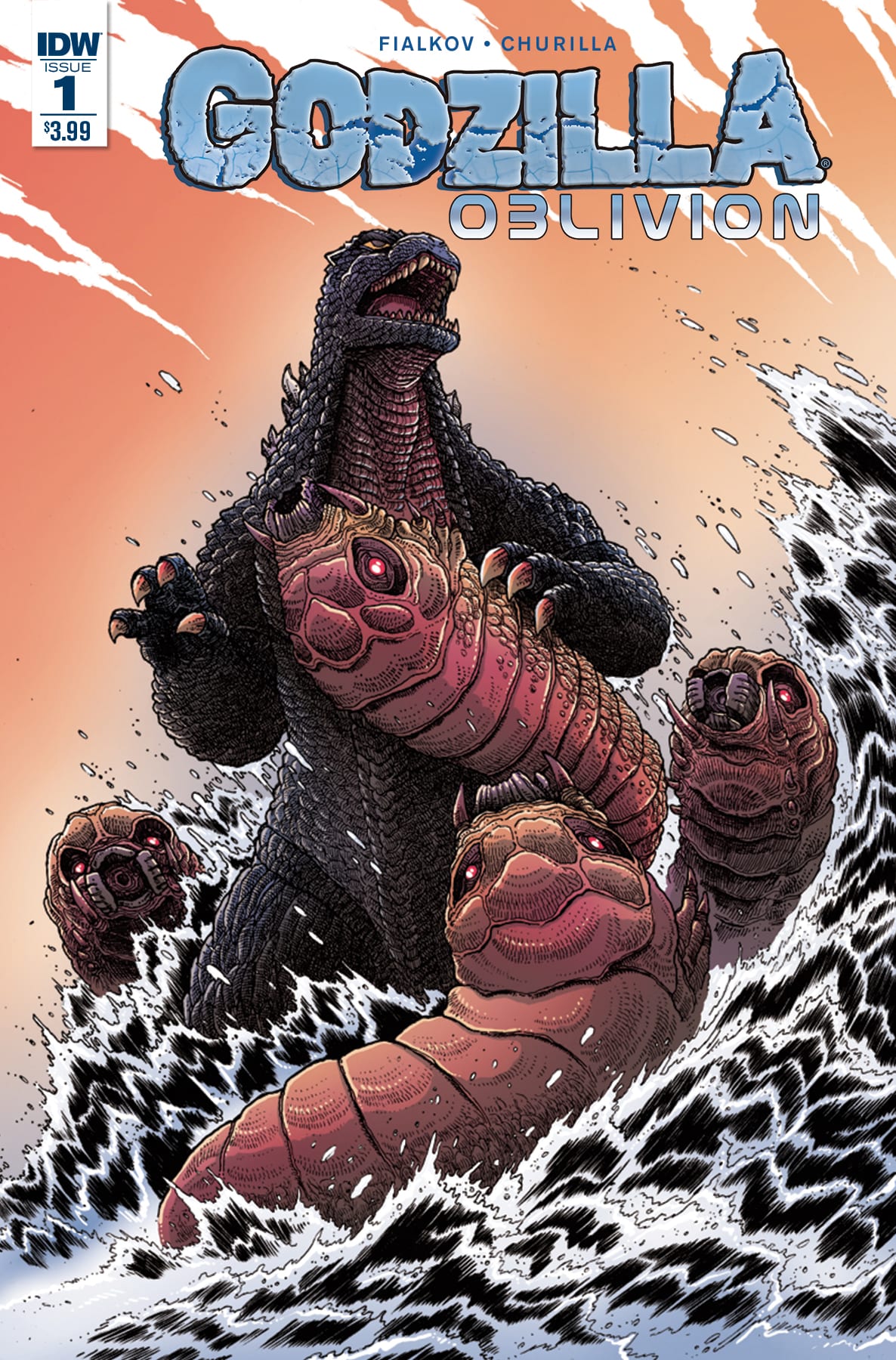 Joshua Hale Fialkov is the creator (or co-creator, depending) of graphic novels, including ELK’S RUN, THE BUNKER, THE LIFE AFTER (all from Oni Press); PUNKS and ECHOES (from Image, and KING (from Jet City Comics). Joshua also served as a writer on the Emmy Award Nominated animated film Afro Samurai: Resurrection, and as Executive Producer of the cult hit LG15: The Resistance web series.

Godzilla: Oblivion focuses on a world where the mighty kaiju, Godzilla rules like a god. This alternate reality runs like a well-oiled machine until a scientist from a parallel world builds a portal and comes in for a visit with his team. Chaos then naturally ensues.

I had the pleasure to talk with Joshua about his career and taking the reins of the King of all monsters for Godzilla: Oblivion.

Michael Garone: Greetings gentlemen! What or who inspired you to become a writer and artist?

Joshua Hale Fialkov: From the time I was a kid I was obsessed with telling stories. First it was jokes, and then it was playtime turned into these epic adventures. At some point, I realized that what I actually loved more than anything
was telling SERIALIZED stories. Stories that begin and end, but leave just enough hanging to drag you back ‘next week.’ That I somehow have a career in TWO industries that are all about serialized storytelling is really a dream come true.

Brian Churilla: I remember having a really visceral response to the cartoon image at a very young age. Storytelling became a natural extension of that. Films, animation and the proverbial introduction to comics in prepubescence, the familiar story. Later, an introduction to the comics masters, (Kirby, Eisner, Wood, Toth, Drucker, Mignola, et al.) I’ve always had compulsion to draw and construct narratives, and I love working with great writers like JHF.

MG: You both have obviously written\drawn for a slew of characters. Who is the one character you have connected with the most?

JHF: As I intend to be God Emperor of Earth, I’m going with Godzilla.

BC: The Secret History of D.B. Cooper is a favorite of mine, so D.B. Cooper. I had a lot of fun
on that book.

MG: Do you relate any of your stories\art to your own life experiences?

JHF: Sure, everything I do is born out of my own life, and my own experiences, at least emotionally, if not literally as well. I think the root of all good drama is truthful experience.

BC: As a cartoonist, life experience applies in a graphic sense. It’s databank of visual data that you call upon constantly.

MG: So, big Kaiju fans? What was your first introduction with the King of all Kaiju? TV? Film? Cartoon show?

JHF: I loved Ultraman as a kid, my best friend, John Angeles had the Super Famicom version of the fighting game, and I was instantly in love. What really rooted me to Godzilla was actually re- watching all of the movies with my kid the past few years. It became our Saturday tradition.

BC: I’ve always been a huge Godzilla fan. I don’t have a recollection of my first experience, but Final Wars is a stand-out favorite.

MG: What is your favorite Godzilla film?

Godzilla films as North by Northwest is to Hitchcock films. Somehow both a greatest hits and its own fantastic thing at once.

MG: What have you taken from your viewing experiences and implemented into this series?

JHF: I really just wanted to capture the fun of the movies as best we could. So much of what makes the movies work is
that there’s a commitment from the filmmakers to just make the craziest, most earnest, and the most fun film they possible can. That’s really key to the franchise. That and making sure there was a Mechagodzilla as my daughter is CRAZY about him.

BC: The sense of scale, the overall tone of my favorite Godzilla flicks visually.

MG: What do you admire most about Godzilla? What makes him so appealing?

JHF: I think it’s definitely the iconic nature of him. Aside from more or less single handedly inventing an entire genre of cinema, and bringing a whole culture into the homes of Americans, Godzilla represents something in Japan and something very different in America. For me, Godzilla represents the fury of the modern age, all of its folly and grandeur combined.

BC: That craggy hide. It’s a lot of fun to draw.

MG: What can you tell us about this new series without spoiling too much?

JHF: Ummm. It’s awesome? And I can say Brian and colorist Jay Fotos are positively MURDERING on it.

BC: It’s true. Lots of murder is happening.

MG: Did you have a say in which version of Godzilla you could use? Such as Heisei or Millennial Godzilla?

BC: I was able to draw whatever incarnation I chose. I went with the 1989 Godzilla.

MG: Is the series slated for just a limited run?

MG: If Godzilla was in the Pacific Rim universe how long before he’d have defeated the aliens and the Jaegers?

JHF: Well, I’m writing the Pacific Rim comics for Legendary, so, I’m sort of an expert. So, like, ten minutes? Even Gypsy Danger is no watch for the Big G!

MG: What were your thoughts on the Godzilla 2014 film?

JHF: I love it when Godzilla barfs atomic fire down the Muto’s throat. I think it’s really tough to make a mainstream American version of Godzilla. And, honestly, in this day and age, with how savvy audiences are, I don’t know that you need to make an expressly ‘American’ take on him.

BC: Yeah, totally agree. I liked it quite a bit, but it doesn’t have the stating power in my head that the Toho version’s do. Those are all so iconic.

JHF: Sure! The Trade Paperback of my series KING from Jet City with Bernard Chang and Marcelo Maiolo is coming out in May. I’ve got EXODUS: THE LIFE AFTER with Gabo and Crank still running monthly and THE BUNKER from Joe Infurnari and Gonzalo Duarte which just kicked off its fourth arc, both from Oni Press!

BC: Working on Hellbreak and some other things I can’t mention yet!

“Godzilla: Oblivion” #1 stomped its way into comic shops on March 30th. Be sure to grab a copy if you haven’t already!

The kaiju legend will return to the big screen in Japanese theatre’s only on July 29, 2016 in “Godzilla Resurgence.”

For more on Godzilla: Oblivion and all your IDW updates please check out www.idwpublishing.com and @IDWPublishing on Twitter.