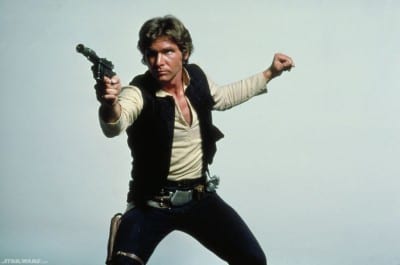 UPDATE: 04/14/2016 Deadline reports that after more screen tests Alden Ehrenreich has come out the front runner to play young Han Solo! With the recent news of MIB 23 coming out it is soothing to get some news on Chris Miller and Phil Lord as they will be sorelymissed as directors of the newest installment of the Jump Street franchise. Though I can not think of any two people better suited to show us a young cocky Han Solo!

The Hollywood Reporter says they have multiple sources stating that after screen tests last week the list has been narrowed down to three actors to play young Han Solo in the up coming film. The three actors are: Alden Ehrenreich, who was most recently praised for his work in Hail, Caesar! also appeared in the movie adaptation of the young adult book Beautiful Creatures.

Jack Reynor is known for his work on Transformers: Age of Extinction, in 2017 he will be in Jungle Book: Origins not to be confused with the upcoming Jungle Book movie. Things must always come in twos!

Taron Egerton of the three Taron is probably the most notable name of the three staring in the smash hit Kingsmen: The Secret Service and the recent uplifting sports story Eddie the Eagle.

The Lucas/Disney people have shown that they don’t need to cast a big name to make a success so that is pretty irrelevant here. If they put Han Solo’s name on a Star Wars poster the fans are going to come see the movie. Which for us fans is a fantastic thing, often times they cast a big name to bring people to the theater. With the name of the movie itself bringing fans in they can cast who ever is best for the part. Disney declined speaking about the news so we will have to wait and see who we get. I myself would love to see Taron in the part but after seeing Force Awakens I trust them completely to pick the right man for the part.