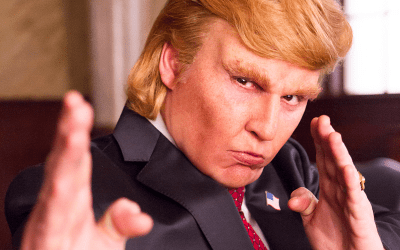 There are few names that command as much media attention as Donald Trump, and it feels like every day we find a new reason to have him on our radar.

Today, FunnyOrDie released a cinematic treasure, that no one could have asked for, into the world. ‘The Art of the Deal’, Donald Trump’s best-selling 1987 book is now a movie. “Found” at a garage
sale by Ron Howard, the film follows the story of Donald Trump’s quest to purchase the Taj Mahal from Merv
Griffin.

The “story” is hilariously presented as a faux made-for-tv film from 1988 complete with opening theme song.

With an all-star cast including a completely unrecognizable Johnny Depp as Donald Trump, Ron Howard, Patton

Oswalt, Jack McBrayer, Henry Winkler, Stephen Merchant, Christopher Lloyd, Kristen Schaal, and Andy Richter, this film will arguably be the most important 50 minutes of your day.

Funny Or Die
Presents Donald Trump’s The Art Of The Deal: The Movie
from Funny Or Die