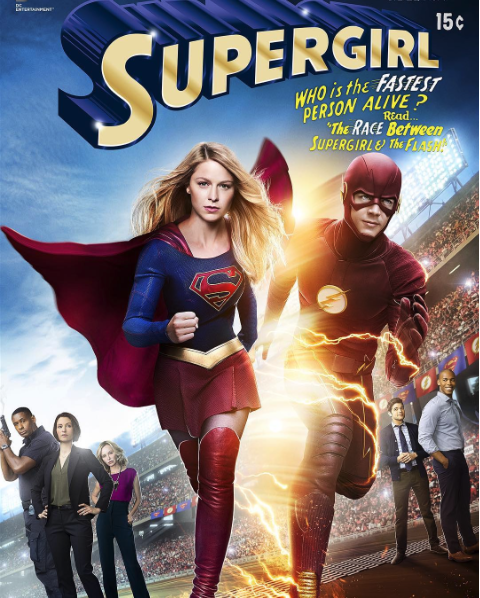 What to Expect from the Supergirl/Flash Crossover

It has finally been officially announced! Since it was first revealed that there was going to a Supergirl show, there were questions about if it could potentially cross over with The CW’s Arrow and The Flash. Then there were images of Flash and Supergirl with Greg Berlanti for Variety in May, 2015, and we just couldn’t wait for the two of them to appear together onscreen.

On March 28, 2016, Barry Allen will find himself in National City in episode 18, titled “Worlds Finest.” In the comics, world’s finest is used in reference to superheroes teaming up, but this is worlds finest, as in plural. Fans of The Flash are used to the concept of multiple earths, but Supergirl has yet to bring it up. I think that in the weeks to come, we might have that idea pop up on the show in order to make the crossover possible.

You might think that maybe they’ll stay away from the multiverse concept in order to keep things less confusing, but I believe that it is the only direction they can go. On Supergirl, there isn’t ever a reference to other super-powered beings besides the Man of Steel. The villains themselves are not humans that have been given extraordinary powers. If there were a man who could run faster than the speed of light, Kara and the DEO would know about him. Not the mention Cat, who would be all over that. There has yet to be a reference to either hero or city on either show, and The Flash and Arrow are notorious for referencing other cities that are protected by other superhero (Coast City is the home of Hal Jordan/Green Lantern, and Blüdhaven is where Dick Grayson/Nightwing ends up after leaving Gotham). The fact that there has not been a single mention of the other is reason to believe that the Multiverse is the direction the show will take in order to make the crossover possible.

Another plausible theory is that Grant Gustin will not be portraying the Barry Allen that we see on The Flash. He could be the universe of Supergirl‘s version of Barry. Perhaps he gets his own origin story via Supergirl that is different from what transpired on The Flash. So far, there hasn’t been any word on if other members of Team Flash will appear in National City. This theory makes sense and is perhaps the easiest to explain to viewers in the course of a single episode. Gustin is coming to Supergirl, but thus far Melissa Benoist is not going to The Flash.

As a possible hint toward the episode, Gustin revealed via Twitter that “Barry gets to be funny Barry.” Considering all that is currently happening on The Flash, I don’t know how much of a funny mood Barry will be in at the end of March.

Regardless of how it all goes down, I am just excited that it is now a reality. Gustin and Benoist appeared together on Glee and I can’t wait for them to be together once more. Barry and Kara are going to be total dorks around each other and maybe it is just Kara’s nature that brings out funny Barry once more.